So Eric and I did something that we haven’t done in about 4 months. We actually sat down and had a discussion about our finances and decided on our budget together.

Normally, what would happen, is I would come up with the budget, and then send weekly emails to Eric letting him know how we were doing. This seemed to be working for us, until I kept looking at our budget every month and realizing it actually wasn’t working for us. So why not try something new?

So here is the breakdown of our budget in October and where every single penny went. 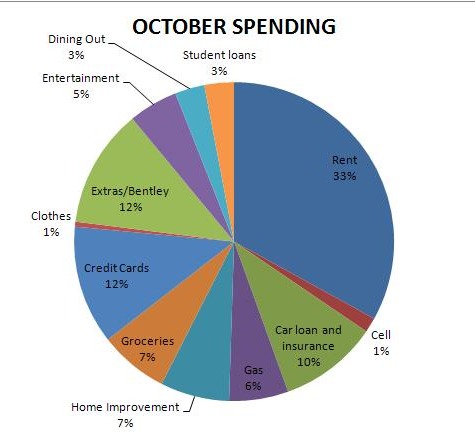 Now, it may seem that our rent pretty much stayed the same, but the reality is that our income in October was the highest ever, and we just spent a lot everywhere else, so that’s why it’s still 33% even though on a normal budget, our rent would have been about 50% because of how much we really had to pay for both apartments. Plus Home improvement projects for our new place also took another chunk of money.

Although now we’re done with bills from the old place! (I hope!) And November, is an awesome three-paycheck month for me! (I get paid on Wednesdays…and I am counting Dec. 1 as part of this month’s salary!)

SO this is what we decided upon for our budget in November: 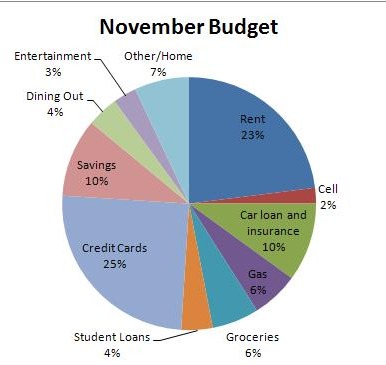 The best part about this month’s budget is that we’re now dividing it upon paycheck cycles as well. Before, we’d start off the month with all this money and by the time the third week rolled around, we were broke! By allotting ourselves a certain amount of money for each week, we hope to stick to a tighter budget.

ALSO–I am only including our take-home pay from our normal jobs. My freelance work is expected to bring in a VERY pretty penny this month, but we have decided to allot that money for 1.  gym membership for me (my jeans will thank me for it!) 2. new TV (possibly) 3. Christmas presents (I had been worrying about this! Two families=double the presents!)  4) Savings and/or debt. 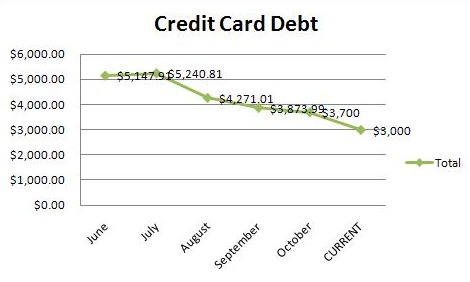 So originally, when I wrote this post, we were on track to be at $2500 for this month…and then I broke my dog’s foot, and we got the exit bill from our old apartment. I was totally bummed…and as soon as I get paid on Wednesday, we’ll be back on track and I was sooo going to cheat and just say that’s where we were and not tell you guys the truth…but I decided against it. Because apparently I have a problem with lying. Stupid morals.

Impact of the Rapid Development of Smartphones on...

Love the pie charts! Way to make everything visual!
Just a tip, take it or leave it: Why not put the 10% you’ve budgeted for savings onto your credit card along with the 25%? The interest rate of your savings account is probably much, much less than the interest you’re paying on your card so in the long run, you’re probably losing more than your saving…if that makes sense. If an emergency comes up this month that you’d need extra money for, in comes the credit card and you’ll just use some or all of the extra credit you just paid off and would’ve put in savings anyway. Chances are, there will be no emergency and you’ll be 10% closer to paying off your card! 🙂

I can’t really give you any tips since you’re doing SO GREAT! Just wanted to lend my support. I love your pie charts, and you’re so close to being credit card debt free! Just keep your eye on the goal! 🙂

I think it’s great that you sat down with Eric and developed a budget together. There will always be unknown variables (poor pooch’s foot), but you have an even better chance of reaching your goal as a team when you approach the process as a team :). xoxo

I budget per paycheck. I find that it’s easier and gives me a bit more wiggle room. I tend to write it out and I like Mint.com as well but somethings get grouped together wrong on it which frustrates me. But, I love your piecharts. 🙂

I love how organized you are – pie charts makes me smile! Since I get paid biweekly, I really struggle with making the money last til the next payday. I have everything planned down to the penny in my Google Doc but somehow I always end up spending everything before the next check hits!

Ooohhh I have serious pie chart envy. B makes fun of my Excel spreadsheet and I’m all, “ok well YOU try and organize two spending habits and 37 bills and saving for the wedding without one!”

Ever since we bought our house in April, our budget has gone completely haywire. Not in a mortgage/utilities way, actually, but just in a “we have a new house and need some decor and some furniture and we love house projects” kind of way.

So this month, we sat down with all our expenses (which is actually kind of tricky, as it’s full-on-winter here in Idaho, and we can only estimate our heating bill), put them in a spreadsheet, and by golly I’m going to stick to that thing like butter on toast. We’re saving all receipts so we can make comparisons, etc. Watch out budget. I have my eye on you.

Glad you’re sitting down to do the budgeting together, I think that’s important. 🙂

I just revamed my massive excel spreadsheet… and I have it split up per pay period as well. I have a different tab for each month, and each tab includes 2 sections- one for each pay period within that month (I get paid the 15th and the 31st)… and in each section is income, expenses, savings, and debt paid. I include the savings and debt payments in the expenses section as well, since that includes all of my outgoing payments- but the separate savings/debt sections help me to see the progress I’m making every month- which makes the payments sting a little less.

I also did one of those focus groups I mentioned to you, last week… and for 2 hours that brought in an extra $75 which was nice. I went for dinner then through some cash into my nephews birthday card… money that didn’t have to come out of my budget. 🙂

I love the IDEA of budgeting, but I hate sitting down and going over all the numbers each month. It is AGONIZING! Thankfully my husband takes it on most months by himself, but I think its great that you sat down and crunched the numbers together. It definitely helps to get you both on the same page, which ultimately gets you to your goal. We are actually due to put together our November one as well. Ugh!!!

And, before I forget, a big congrats on chipping away at your credit card debt!!!! It is definitely hard to put aside the money for that each month when you would rather be spending it on other things. You are so close though! Keep at it! You will be soooo happy come April!

And thanks for your kind words on my pumpkin neglect. I actually ran out to buy one just before the trick-or-treaters came last night. Total guilt purchase! I didn’t want to be the only un-festive house on the block! I probably won’t carve it at this point, but I might scoop out the seeds and toast them for a yummy snack!! 🙂

Ohhh you brought up the dreaded “B” word, so now I gotta rear my ugly head!

First, congrats on the progress you’ve made on getting your CC debt down. I know it can be hard, and mazel tov to you for sticking to the plan.

I’m a spreadsheet and Excel geek, and so seeing all that information just makes my heart flutter. While we have a generic budget I stick to, we should probably do a better job at tracking expenses and comparing the budget to the actual. that way, we know where we are struggling at (for me, Woot.com has had some great deals), and where we’re getting better (dining out was down this last month).

And all the fancy computer and web-based programs (Quicken, Microsoft Money, Mint.com) don’t compare to the old standby of a spreadsheet, some formulas, and some graphs!

Why you should study a professional trader’s...

What Are the Financial Problems College Students...

How to create your DREAM wedding while...