For richer or poorer, till debt do us part 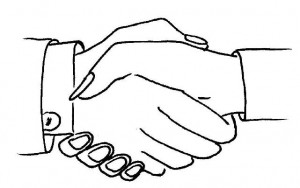 Reports claim that fighting over money is the number one cause of divorce in the United States.

The biggest arguments Eric and I have are definitely over money. I’m the saver, he’s the spender.

Apparently, it is common for opposites to attract and that’s why a lot of arguments occur over money—opposing views. We learned this at a “relationships and money” class we attended last week.

It was really eye-opening. It turns out Eric and I were an exact replica of the instructor and his wife, except in their case, I was the man–the responsible oldest child introvert who can handle money extremely well– and Eric was the wife, the youngest child extrovert who as soon as she gets hold of a credit card will rack up thousands of dollars in debt.

But what are you supposed to do? How can you reach your savings goals if your partner is constantly sabotaging them?

So it was decided off a suggestion from the instructor—I now hold all of Eric’s credit cards and his ATM, and he is on a strict cash-only basis.

Isn’t this kind of drastic, I thought. I mean, I’m supposed to be his wife not his mother. And shouldn’t he be able to hold onto a card without using it?

No. It is wrong to assume that because I can do it, Eric can do it. We are not built the same, we do not think the same, we don’t manage money the same way. But we both agree that I should manage the money completely, because as much of a spender as Eric is, he can recognize that our finances wouldn’t be as good as they are if it weren’t for me. Smart man.

And apparently this kind of thing–one person handling all the finances, and the other on a strict cash-only basis– works. Because what we’ve been doing has definitely not been working.

Remember that fun money account we started for Eric? It was grossly mismanaged. Like really bad. It caused a bit of a rift between us, but attending this money class helped us both learn. On top of Eric making sacrifices, I need to learn to loosen up a little bit. Gee, who would have ever thought that I needed to loosen up on our finances? *insert sarcasm here*

I no longer get angry that Eric can’t seem to handle a credit card—it’s part of his personality! And he doesn’t mind that he is on a cash-only basis, because we increased his “allowance” and he understands the importance of building up our savings account. I also am easing off the savings account. We are still on track to save a ton of money. What’s the big deal if we’re off a couple hundred dollars? Wouldn’t it be better that still enjoy ourselves and be off by a few hundred dollars than to be misers and incredibly unhappy with each other?

I’m hoping this new method will be the solution we need. I no longer have to worry about random charges appearing on our cards or hidden purchases that I didn’t know about. And Eric has the freedom to spend his cash as he chooses without checking with me. For big purchases, we discuss it together and look at our budget and see if it aligns with our goals.

I know this may not be a great solution for others, and it may seem too restrictive to some, but we’re really looking forward to trying it out this month. We’ve tried other options and they haven’t worked for us, so maybe this is the golden ticket.

How do you and your significant other handle expenses?

It takes an anniversary to get us dressed up…

Impact of the Rapid Development of Smartphones on...

Yep. We followed the same spender/saver pattern. It was really hard at first dealing with our differences. Especially since everything in a marriage is something new, money is just another thing on top of it all.

But after seven years we’re slowly coming to the middle, and I realize more and more that it takes both of our personalities to make it work. I encourage him to save more, and he has learned the merits of that. He encourages me to spend more – like an extra $20 to take the kids out on a paddle boat at the zoo when I wouldn’t have even considered it. I’m glad I have him to help make those memories for our kids – at least the ones that require money.

Hahaha, you crack me up.

So… I don’t have a significant other to share my finances with, but if I did… I think I would want things either completely separate (I’m all for the pre-nup) so that we are responsible for ourselves… or else, if I know that he is VERY responsible with money, I would be fine giving up the reigns of control and saying “tell me how much money to give you every month for bills and let me spend the rest of mine”. I’d have to have a lot of trust in that situation though, not easy for a girl who’s been burned to give up the control… but I bet it would feel really good to not have that on my shoulders. (Wow, one extreme to the other, eh?)

Cash mostly for him, and sometimes purchases on the cards (I check our accounts every couple of days so we stay up to date on those things).

I think communication is the main thing. It’s when there are surprises and secrets that issues arise.

I really love that my fiance is now starting to understand the power of saving and is starting to get a little more self control, and understanding of his spending habits.

Some people just aren’t good with credit cards. And that’s fine. Just don’t use them!

I feel like you are writing about my marriage and financial life. When we were first married it was very hard and a very similar sounding to your situation. We worked it out and kind of do the same thing too. I am the saver and in charge of the financial front. We talk about what we want to do with our money, but I am the executor. My husband was like Erik in the fact he couldn’t handle a credit card, but he is different now. He has his own fun money account and is very responsible, that wasn’t always the case. Many a fight we had about growing up, but I too realized I needed to loosen up.
Good luck to you guys, you will figure it out. You are on the right track.

I am sorry, I just reread my comment and realized I spelled your husbands name wrong. Sometime I think my brain just disappears when I am typing. Sorry again.

Great post! My (new as of this weekend!) fiancee and I are definitely like you and your husband — I’m a saver, he’s a spender. I figure we balance each other out and we’ll just have to figure out the right compromise.

My dad is an extreme spender and gambler. For years he hid this from my mom and then all of a sudden in blew up in their faces. The banks all threatened to close my parents’ accounts. My mother had to sign notarized forms where she became the sole person on all of the bank accounts. My dad cannot have any credit in his name and he can’t even have a checking account because of how many times he overdraft. This means that my dad has been on a cash only system for years. It can be very frustrating for my parents at times because they have two small children and expenses come up. For example, my mom will want my dad to go to the grocery store on the way home from somewhere, but he won’t have enough cash on hand so he either has to go to the bank or go and get my mom’s debit or credit card.

I think that if the solution works for you and you are both okay with it (i.e. you don’t feel like his mom and he doesn’t feel resentful) then I say go for it. Finances almost ruined my parents’ marriage too many times to count.

I’m totally the spender, and my wife is totally the saver (I almost typed “savor,” which, while I do think she is savory, is not the correct spelling). I was the oldest extrovert who never learned to save before I got to college, she was the 3rd youngest who came from quite humble circumstances.

While we’ve both gotten better (I’m a huge saver now, and she’s learning that it’s OK to spend a couple of dollars), some things never change. Computer/Technological junk is my weakness. She knows that. And we’ve had…discussions…but it’s all been a matter of perspective. If I indulge in a bit of a hobby, she doesn’t mind, as long as it’s within “reason.”

I am constantly impressed by how well you two are handling the money thing, and rifts that are caused sometimes by money. I think that is awesome, and you are building a strong base! Congrats on your anniversary too 🙂
As for me, when I was married, money wasn’t an issue…only because my ex refused to share bank accounts. need I say more? 😉

Good for you and your husband to try something that works for you! This method wouldn’t work for my partner and me – we’re a mixture of saver and spender – so we’ve come up with “visual cues” – creating graphs, count downs, etc, with our money goals – because we both respond to those sort of things.

It doesn’t matter what any one else does. As long as all those involved are happy and it works for you, then you’ve got a golden system!

How much does it cost to go...

Use Your Bitcoins Online