With Eric’s 4 a.m. wake-up time Monday thru Friday, we have a hard time sleeping in on weekends. I had Friday off from work and I found myself wide awake at 5:30 a.m. It sucks.

A week ago, we had friends over and Eric fell asleep mid-conversation! It was 9 p.m.

Well, anyway, this past weekend some friends invited us out for dinner. I think we’ve been out to dinner once in the past 3 months so we were really excited. Us going out on a Saturday night?!

Whoa, let’s not get too crazy.

So Eric and I got there first and sat at the bar, and we ordered adult beverages. We were so proud of ourselves.

We ended up having a great time at dinner and decided to keep the night going and headed over to an adult-type Chuck-E-Cheese, called Dave and Busters.

We played pool, played basketball, ski-ball, a trivia game. We were living it up!!

Look at us and how grown up we are!

We both had left our phones in the car, but we were for sure thinking it was at least 11 p.m. I mean we had gone to the bar, gone to dinner and we must have been playing games for at least a couple of hours, right? We both hit a wall and started yawning and we told our friends, “we think it’s time to go home.” So Eric and I started walking to the car, and we were telling each other how proud we were that we had stayed out so late on a Saturday night. Maybe we were turning over a new leaf?

And then we get in the car, turn it on and see this: 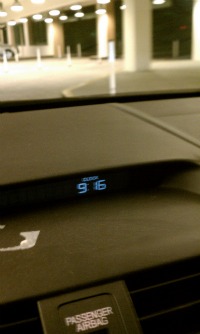 uh, did we forget to change the clocks for daylight savings?

It was honestly sad. We were exhausted. We felt like we had been out for hours. And yet, here we were, heading home on a Saturday night at 9:16 p.m. because we were ready to pass out.

I guess we’re just not as cool as we thought.

Do you guys ever have “old married couple” moments?

How I Got Whole Foods to Cook Dinner...

Oh, Hubby & I are 100% like this. We barely ever even make it out of the house, so congrats on that mean feat! Between the long hours that he works, and my reluctance to share him with anyone, as well as our distinct lack of money, it just makes more sense for us to have lots of quiet nights in.
As long as you enjoyed yourself, I don’t think it really matters what time you were out until 🙂

Your dog looks like a toy in that picture! Love it! And I’m majorly an old married woman. I stay in, I talk to the tv, I go to bed early, the works!*

That is the absolute cutest pose with the dog 🙂

Even though I stay up pretty late, I still want to be home in pajamas by 10pm! You’re totally not old yet… and it wasn’t THAT long ago you were out partying late nights!

Oh hell that is totally us too. We ordered tickets for something the other day and we are concerned about making dinner AND the show…that starts at 7. Pathetic.

Being an old married couple isnt always a bad thing….being content is happines, not oldness. lol

My Fiance and I are already like this and we are not married! We went to dinner with friends Saturday night and we got back to the car it was 9:20. I told my fiance, I cannot wait to go home and get in my PJs. I was asleep by 10:30.

This happens to me ALL THE TIME and as a single person it is not so great when all your friends wanna keep on going and you’re exhausted. I don’t know how they do it, because by 10 pm I need to be in bed with me jammies on, maybe watching an episode of “Parenthood” but nothing more than that.

You two aren’t an old married couple because you had fun while out!

We are definitely old! We rarely go out, and when we do, I’d rather go to sleep and get a good night’s rest than stay out late. I’m lame! 🙂

I feel like I’m the old one in my relationship. I used to be the one that wanted to go out all the time, and my husband didn’t. Now he wants to go out and I don’t. I’m becoming quite the old lady. 🙂

LOL! I love it! I sometimes grossly underestimate the time too and think it’s way later. M is a nightowl most of the time but will go to bed when I do and is starting to get far too accustomed to it, I love it 😉 Last week, for some reason, he was SO tired, he literally fell asleep on the couch at 8:30. I was shocked!

hahaha, too funny! but yes, we have those moments now! i can’t believe how hubs and i use to stay up to the wee hours of the night! where did all that energy go?! but yea, when it passes 11 pm at any time we need to head home … before 4 am was not a big deal. crazy!

First off, I love that photo. Love the dog in particularly. Must be some really peaceful days with that to look forward to! Second, I’m not married, but I feel like the child of my group of friends. I am in bed by 10pm while their sleeping hours are somewhat closer to 1am-4am. I don’t drink (and the times they take me out to drink, I tell them the alcohol drinks taste like medicine, and ask if I can have some juice instead). I’d rather spend time in with friends than out by myself. Oh yes, not sure if that’s feeling like a child or an older person. Decisions, decisions.

I think you guys did great for a weekend off, and what matters is that you enjoyed it, not that you went with the crowd’s definition of fun and stayed until you fell asleep in the backseat of your car.

I have those moments all the time thanks to my son! I can’t stay up past 11 PM, some times earlier, without feeling dead the next day. I was watching a movie with my boyfriend this past weekend, and I fell asleep 20 minutes after the movie started, and slept for most of it too. Pretty sad on my part.

It’s your turn to clean, honey