We Bought Our First Home

We Bought a House! 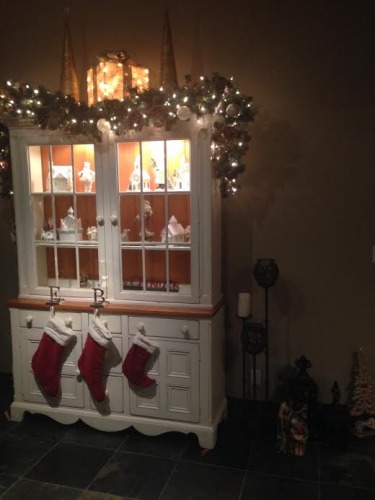 We moved in Friday, but decorating for Christmas was my first priority…

It has been a whirlwind and stressful process and I think at times we were both ready to kill each other, but we survived buying our first home.

We could not be more thrilled!

I am going to present a series of posts on buying our first home and detail how Eric and I went from being $45,000 in debt to first-time homebuyers in less than five years.

How We Bought Our First Home

After a particularly rough week on both of us in October, Eric wanted us to go look at houses to lift our spirits. You know, just to window shop…and so the story begins.

The first house was a four-bedroom, two-bath, listed for $583,000, and it was a major fixer-upper. Everything would need to be updated—it looked like they hadn’t updated anything since it was built in the late 1960s.

The second house was a three-bedroom, two-bath, listed for $629,000. It had recently been updated, brand-new kitchen with white cabinets, that brown granite you see in everyone’s bathroom, etc. In other words, it was a nice house, but definitely not our style. Plus, while it was a three-bedroom, two-bath, the layout was very off. The living room was super small, feeling even more cramped than our current living space.

The third house was a two-bedroom, two-bath, and it was listed for $559,000 and was a For Sale By Owner (FSBO). I initially didn’t even want to see it because I knew that we would need a three-bedroom to grow into. But when we saw this house, I fell in love with it. There was so much light, plenty of space, an entertainers’ backyard, and even more so, the 5,500+sq.ft. lot allowed for plenty of room to expand in the future if we wanted (say for that master suite…).

So then the seed was planted.

How We Decided to Make an Offer

We loved the house, we loved the location, and while I didn’t love that it was a two-bedroom, we could work around that by adding a master suite in the future. Comps in the area for three-bedroom houses were selling for low to mid $600s. We could definitely add a master suite for around $40-50K, which would vastly increase the value of the home.

What’s more is that I had always set our sights on this specific neighborhood but always assumed it was out of our price range. I can’t say enough great things about this neighborhood—it is so Leave it to Beaver. There is plenty of pride of ownership, the houses are unique so they’re not your stereotypical beige that Orange County is so well-known for, and there is such a great sense of community with a central park in the middle of the neighborhood and holiday parades within the neighborhood.

In fact, we’ve already received our first community newsletter, and more than four neighbors have stopped by to introduce themselves! We are tickled pink by how lovely the neighborhood and the neighbors are. We are super excited to attend our neighborhood Winter Social this Friday and participate in the holiday lights contest!! EEEEE!!!

I just cannot say enough good things about this community and my heart just swells as I imagine our kids growing up here (when we finally decide to get around to that…life has been busy).

Gold Or Traditional IRA | Which Is Better?

4 Ways To Cultivate Gratitude for What You Already Have

When It Rains, It Pours

How Our Finances Have Changed Since Buying Our...

How Our New Mortgage Will Affect Our Budget

How Much It Cost to Buy Our First...

How Our Marriage Survived Escrow

The Escrow Process of Buying Our First Home

How We Made an Offer on Our First...

Mazel tov! I know y’all have been kind of sort of wanting to take the leap for a while, and it sounds like things just fell into place! I hope you have a fantastic first Christmas in your new home.

I knew the home story would be here!! Why didn’t I come sooner?? So excited for you. Can’t wait to read the rest!

Congratulations, you two! I know how stressful home-buying can be. Glad to see y’all made it through!

This is amazing!!!! Huge congrats to you guys 🙂 I hope you enjoy it and I can’t wait to read more about it!

That def seems like an amazing neighbourhood community…. I’ve lived in the same house for 12 years now and don’t even know what my neighbours look like!

Congratulations on purchasing your house! Can’t wait to hear more about it 🙂

Just seeing this! Yay! Very excited for you, and look forward to reading more.

Congratulations, that is so exciting! Can’t wait to hear all the details! I hope you’ll post more photos too :). Loving your Christmas decor!

Congratulations! It’s so exciting that in such a short period of time you from being in debt to being able to purchase a home in your dream neighborhood. I can’t wait to hear more 🙂

We are absolutely thrilled and in shock ourselves that we made it happen.

Congratulations! I know you guys have been going back and forth on that for a while! What a fun thing to happen, especially right around the holidays! Can’t wait to hear more details and see pictures!

Thank you! We hope to post more photos soon!

Congratulations! I can’t wait to hear all the $$ details as we want to buy in southern California in a few (many?) years. I can hardly believe how far you two have come just since I’ve been reading your blog. It is truly amazing.

I’m still wrapping my head around the finances as well.. we will definitely be sharing in a future post!

Congrats on the house purchase! I was wondering with your musings on smaller down payments a few months back if you were inching toward a possible purchase. I hope your new neighborhood and house is everything you hoped and dreamed of. =)

So far, we love it!! We are very exhausted though and overwhelmed with how much there is to do!

Gah, sooooo stinking excited for you friend!!!! I can’t wait to see it! I hope I have time to stop by on Monday!!

I hope you have time to stop by too!

That is so delightful that your neighbours are awesome!! Congrats on the purchase and best of luck with the settling in.

Thank you so much! We’re thrilled

I am beyond thrilled for you guys!!!! I’m still at the furtive glancing stage of buying a house but can’t wait until January 2016 when I’m giving myself permission to actually take the plunge. I can’t wait to hear everything you guys went through financially and the meat and potatoes of being a buyer that they don’t show on HGTV!

I have been fascinated with reading others’ home buying experiences as well, so I’m excited to chronicle our journey.

Congrats! That’s so exciting and even more so because you have changed your whole financial life in just a few years. Enjoy the house!

Thank you! We hope to have many, many years in our new place to enjoy.

So exciting!! My brother-in-law just bought a house in Orange (the one who lived super close to you in Costa Mesa) – next time we visit them, maybe we can swing by to congratulate you on your new place too! 🙂

I would LOOOVE for you guys to stop by and visit! I still remember the first time we met, and you didn’t even know that Eric and I were going to be getting married, haha.

Congratulations. Another stage down on your financial journey. Christmas decorations are already looking good and I’m looking forward to seeing more photos!!

I can’t wait to share more photos! WE seriously just haven’t had the time–I really want to take one of us in front of our new place, but it’s been rainy, might just have to do!

So exciting. Location, location, location!! And you can’t get everything. I’ve watched enough house hunters to know that. You’ve been window shopping for years so I’m glad that you were finally able to take the plunge. I didn’t think you were gonna rest until you did!!!

That is so true!! There is no house that is absolutely perfect. It can be as perfect as possible, but there are still a bunch of minor things that you have to do to make it yours…

so exciting! Glad to hear you me it through and I’m staying tuned for all the details 🙂

Congrats once again! That’s awesome and I hope you will share some pictures!

I plan to take more this weekend when the sun’s out!

WOOHOOO! Congrats! Your neighbors sound nice too so that’s another plus 🙂

The Escrow Process of Buying Our First...

How Our Finances Have Changed Since Buying...

How We Made an Offer on Our...