I know you all have missed my color-coded pie charts, so here we go. This is what our new monthly budget looks like. This is the very first month it is going into effect, so n a couple of weeks I’ll be able to see how we did. 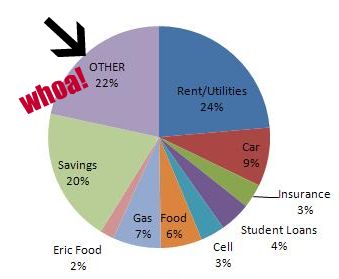 When compared to our budget before, you’ll notice some big differences, such as the elimination of credit card payments and the jumbo contribution to savings–we’re actually going to be able to double our contributions to savings and I’m hoping we’ll be to contribute even more, but I don’t want to push it just yet. We just got rid of credit cards, I want to have a little bit of breathing room before we start feeling like we have to live like paupers again.

The other big difference in our budget this month is the OTHER category.

Traditionally, we’ve used the OTHER category for all that “other” stuff, like dining out, home projects, clothes, Bentley’s food and grooming, etc. We almost always went over budget in our OTHER category, but at least having a budget helped us minimize the spending. And while the percentage is about the same as before, the new income has added a notable amount of money to this category–and I’m just not comfortable having all this money floating around.

Well, the issue is more that when we don’t actually budget every penny, the “extra” money seems to float into the abyss on Starbucks, fast food, mani-pedis, ice cream…I mean, pretty much any impulse purchase that catches our eye. I think we’ve been doing a lot of wasteful spending lately and it’s time to nip it in the bud—while still allowing ourselves chances to have fun.

Which is why I decided to break down the OTHER category and budget it so that we can eliminate wasteful spending. 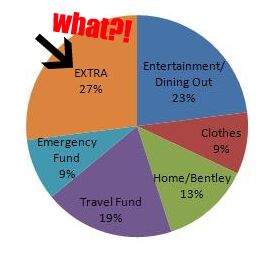 While we still have unaccounted for money (27%!), at least it’s smaller than before. I’ve also added some of this money to go toward two new savings accounts–a Travel fund for that much-anticipated honeymoon trip in August, and a $1,000 emergency fund for …emergencies. These will be in addition to our DON’T TOUCH jumbo savings account.

How much money do you guys usually have “leftover” at the end of the month? What percentage do you budget for the “OTHER” category? What do you think is a comfortable amount for an OTHER category?

How to Budget in Six Easy Steps

7 Bachelor Party Destinations That Are Not Vegas

Why you should study a professional trader’s portfolio

Wondering If Your Current Relationship Will Last? Lookout...

Never Pay for a Wedding Ring on Credit...

4 Things to Know About Commercial Appraisals

Tips for Dealing with Wedding Debt

Our “Other” category is less than 2% of our budget. Ouch 🙂 We don’t have much left at the end of the month, if we do have any money left I try to add it to another category that didn’t get fully funded or savings.

Where did you make your pie chart? I made one in Excel, but can’t get saved to my blog. It won’t copy.

you are uber organized about your debt and debt payments…way to go! i am inspired!

Congratulations on being debt free! I too enjoy the pie chart.

I too believe in the zero balance budget, meaning every dollar is spent in some category.

Our “leftover money” is used to lower our mortgage.

The one thing that I see that is missing is giving. How about tithing?

Love your attention to detail, fiscal responsibility and the goal of a honeymoon in August! xoxo

Wow, look at you being all organized!

Just a suggestion, but why don’t you take some of that “other” money and increase your student loan payments? Not sure how much you have in SL debt but if you get that paid off, it’s one less bill coming out of your budget afterwards… then you have even MORE “other” money to budget, haha.

When I was working I was putting as much as possible into savings and spent a good deal on rent, food and metro. (That’s the way it is in the city.) I tended to spend an extra on clothes, going out and presents for my boyfriend. It turned out that I could have saved even more if I had been a little more careful. Now I’m in school with my mom giving me about $300 a month for gas, food and extras. My goal is to be frugal and put $50 of that money in my savings account every month. That way there is always something in there even if it’s not much.

How do you make the pie chart?! maybe i missed it if you already said it but i think that would be perfect for the hubby and i :0)

I totally have missed your color-coded charts, so thanks for bringing them back!

I am so impressed with the huge savings and other category (part of which is going to saving for specific goals). I only hope that we can get to that point! The main problem we have is that our mortgage is almost 40% of our take-home pay… whoops! Congrats on being debt-free and I can’t wait to hear what you’re planning for the honeymoon!

Awesome that you are focusing on this. We are doing the same thing. It is great to start off the year this way. Definitely focus on saving as much as you can!

The zero based budget. Honestly, give it a go!

We over compensate for bills (thank goodness, we just received our biggest utility bill EVER) and put a lot into savings so we usually do not have much at the end of the pay period. It actually encourages us to be smart and frugal about money.

So my advice? Move that 27% on over to savings! You can always get some out if you REALLY have to…

I agree with Mysti, if you guys are that good with money and you literally have nothing to use if for from her list, then I say, take an awesome vacay to Miami and take me out to dinner 😉

Hey, I don’t blame you for giving yourself some breathing room before you go gung-ho on savings! I keep thinking about my first month without debt… I’ll have $1,200 extra to play with. We could go on vacation! I could go shopping! We could eat out for every meal! Ha, okay, I don’t want to do that last one because we’d get uber fat!

I say it’s fine to give yourself some time to chillax between now and the student loans. 🙂

It’s definitely important to track your “fun” spending, at least so you know where it’s going. Good luck!

Here are my thoughts, in no particular order:

1) why not tackle your student loan?
2) are you contributing enough for retirement?
3) do you have a maintenance fund for your car?
4) Are you saving for gifts and holiday expenses?

and last but not least…if you have 1 through 4 covered…..you can

Wow, that is AWESOME! Go you guys!! I definitely need to save, save, save, this year, now that I think I finally can. It’s a good feeling, isn’t i t? What do you use for budgeting again?

The Calm Before the Storm: 5 Preparations...