The Mr. and Mrs.Things My Husband Does

This post is about bacon fat. And how it started a war. Between me and my husband. You’ve been warned.

There are many things Eric and I share, but coffee mugs are not one of them. You see, I like all my mugs to match. Eric likes all his mugs to not match. Something about character, he says. 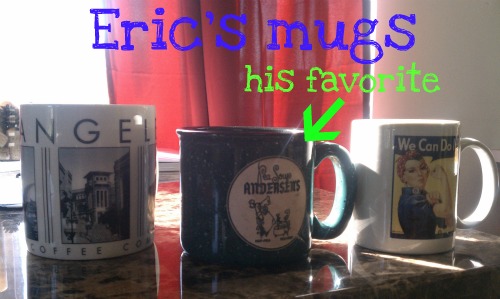 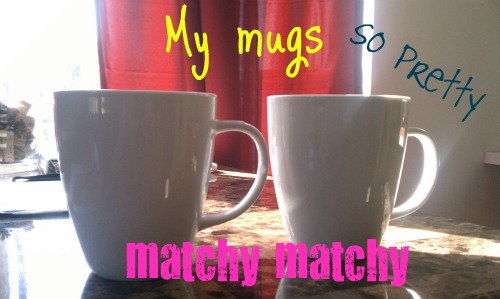 <Eric note> Erika has about four of the same type and style of mug.  I have ONE! JUST ONE MUG that I use everyday.  It is a green Pea Soup Anderson’s mug.  That is why I always use one of her four mugs for the bacon fat. <end note>

Back to me now (Erika), while Eric is right that I have four mugs, and he only has one that he uses daily, he also has other mugs that neither of us really use but that he refuses to get rid of. Why can’t he use one of those mugs, huh?

<Eric note> I have two other mugs! And I don’t even use them,  they are GUEST mugs! <end note>

And again, back to me, if they are guest mugs, why couldn’t he use one of those?

So he pours it into my coffee mug…where it solidifies and then I have to dump it out and wash it and it’s all greasy and takes forever to get clean. Don’t ask me why I always end up washing it and not Eric–it just happens that way. 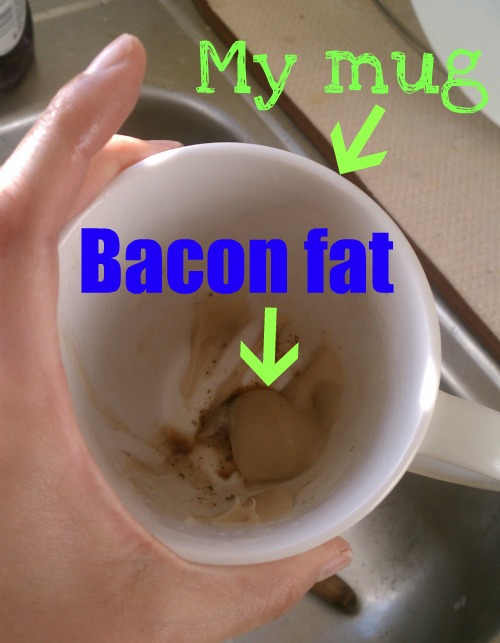 And you know what he did?

He laughed at me. That condescending little laugh that says “oh yeah?”

So I did what any normal irate wife would do–I scooped out the bacon fat, grabbed his favorite mug, and slithered it all around. 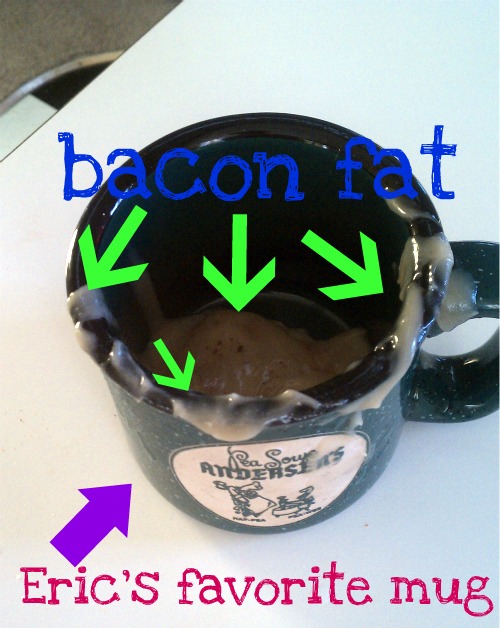 Let me tell you, he wasn’t laughing anymore.

He then took it too far. He grabbed the bacon fat and smashed it into my face.

And this is how we spend a Friday afternoon. How was your weekend? What kinds of ridiculous fights do you get into with your significant other?

Things My Boyfriend Does

How I Got Whole Foods to Cook Dinner...

I commend you both for making bacon fat sexy, though. Lol.

I am torn between laughing and throwing up. This post makes me glad to be single for just a small minute.

Here’s a solution… I do the same thing with my bacon fat that my mom does.

Buy a small glass pyrex bowl – the 1 cup size (about $1 at your local kitchen store) and use that, but keep the bacon fat in the fridge with a little saran wrap over the top and add to it at time goes on. You’d be amazed at how handy spare bacon fat can be! If you don’t want to save it, though, after it solidifes you can pop it out with a butter knife and throw it all away!

Oh wow. This is hilarious but if it happened to me I’d be pissed! Well, not necessarily with the bacon fat in the mug but the smearing it all over.

OMG! My husband puts fat into mugs too!!!! Drives me crazy!!!!! I’m like “use an empty can from the recylcing, or a bowl that never gets used… something! But no, always a mug!!!!! and it’s gross and sits around for days before someone throws it out and now I have to go yak from thinking about that. 🙂
so glad I’m not alone though!!!

OK….so did this war end with some hot monkey love, or what?

1) What about using an old coffee can, and just keep it in the fridge? When it is full…just pitch it.

2) If Eric insists on using a mug, have a designated BACON mug.

3) Go vegetarian. (I am not…but just throwing it out there).

OMG! I can TOTALLY see how that fight went down, I can hear you both talking! so funny! Here’s my solution: microwave the bacon on a plate, it comes out super crispy still and less messy (put a papertowel over the bacon in the microwave) and then you can just wipe a plate instead into the trash 😉

Hahaha. This post is too funny. You definitely had me laughing out loud at the idea of you two chasing each other around the house with bacon fat!

Just a couple of notes that will (hopefully!) bring some peace to the bacon war.

1) If you run really hot water while you’re doing it, you CAN pour bacon fat down the drain. It’s really OK. Especially so if you chase it with some vinegar and baking soda.

2) If you want to keep using your mugs for this (I’ve never even heard of this by the way. Everyone I know uses jars!), soak the mug in some water/vinegar/baking soda for a couple of hours. It’ll get the grease right out.

You had me until the bacon fat left the receptacle. Worst war ever.

Also, tell him to use the “guest mugs”. I side with you!