…because I clip coupons.

The other day, some co-workers of mine were having a conversation about a former employee who would always take coupons to restaurants. The tone of the conversation was one of mockery almost. And in my mind, I was thinking “what’s so wrong with wanting to save a little money?” But there is a line between being frugal and being cheap–and no, they are not the same thing. I would never want to come across as cheap and so I see the inappropriateness of someone who (as they stated) hated going out to eat unless she had a coupon.

I see myself as definitely more of a frugal person. I actually enjoy clipping coupons, and bargain shopping, and by saving money on my grocery budget, it allows me to use those savings toward other things, like a certain vacation.

Just because someone clips coupons doesn’t make them a cheap person, but rather money conscious. And in this kind of an economy, that’s a good thing. I will admit I feel some sort of embarrassment when I hit the check-out counter and always say a silent prayer so that no one will get behind me in line, but ultimately, the embarrassment is worth it to save more than 60% on each shopping trip.

I always seem to shy away from speaking up about controversial topics– such as religion, politics, and now couponing–in the workplace because I don’t think it’s appropriate. However, my co-workers don’t seem to have an issue with speaking their minds about any of these subjects. Maybe I need to stand up for myself and my opinions more? Or maybe they’re just in the wrong for being so vocal and I should keep to myself? 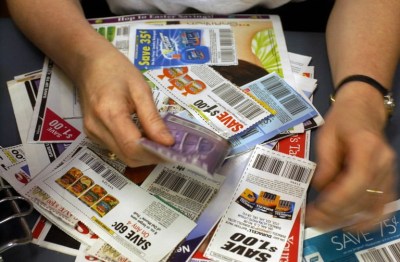 I’ve just come across your blog, and I’m so with you on a lot of those things! I’m also a (fairly) newlywed and we are trying to save up for a vacation. I’m finding it hard to not be embarrassed to tell people ‘we can’t afford to…’ for dinners etc when we used to be able to, even though we have a perfectly fine reason!

I also have issues with people in my office who talk very openly (and snidely) about certain topics (particularly religion) – and I’m unsure what to say when I don’t agree since I wouldn’t have brought it up in the first place!

Sorry for that mini essay haha.

should I feel bad that I’ve sadi that I HATE going out to eat without a coupon?? It’s true. With all the sites that offer half price coupons or deals, how can you not hate paying full price!? I have to admit that sometimes I do get embarrassed bc me and my husband are relatively young (24) and waiters/waitresses sometimes assume that by having a coupon, or being young, you’ll be a bad tipper. But we tip very generouslly. I’ve started using some coupons at the grocery store but haven’t seem to found any good online coupon places that make it worth it… not to mention, my grocery store doesn’t double coupon prices or offer any incentive for using them…. anywho..

I would probably stay away from religion and politics in the office, but I think you could share your reasons for couponing without being shunned. Or at least, I hope… xoxo

I don’t understand how people can feel this way. It’s like…free money! Every week! In your newspaper!
I always use coupons. I love clipping them and organizing them and I love seeing how much I save each week. There are some things I just won’t buy without a coupon (toilet paper, toothpaste, body wash).

About three months ago I started clipping coupons and I love it. I am a new mom, and the most savings I see is on diapers and other baby items. I think I might be addicted to savings. However, just like you, I do not see myself as cheap… and I don’t buy something just because I have a coupon for it. I use coupons for the items that I would normally buy, anyway.

By the way, don’t you think that stigma that was once attached to coupons is slowly but surely going away? More and more people are comfortable using coupons at grocery stores… even most cashiers greet you buy saying “do you have any coupons today?”. I think that’s so awesome! 🙂

there is a big difference between cheap and frugal.. being frugal is good!!! I need to start getting into clipping coupons, I just don’t really know how to start… You seem to be an expert already!! 🙂 Being cheap is more like you refuse to buy a $1.99 bottle of shampoo and go weeks with nasty hair just because you don’t see the point in spending money on things like that. And you have lovely hair, so you are definitely not cheap. 🙂

I’m still kind of new to coupons, and I’m still kind of embarrassed when I use them. I never use a lot when I go to the store (maybe 5 or 6 coupons at a time), but people always seem to get so mad when they are behind me in line.

Lol. I think people that don’t use coupons that are readily available are silly. Why would you pay more than you have to for something?

I think you are absolutely right. There’s no harm in clipping coupons. I’d agree that it would be a little extreme if you didn’t go out or did stuff because you didn’t have a coupon. But that’s not who you are. You value your money and that’s a precious skill to have nowadays!

Um. My coworkers know I love couponing so much that they bring in their sunday inserts to give me! Plus, I have them hooked on the campus coupon book and we all enjoy going out to lunch together and saving money. I’ve pretty much given them the coupon bug!

I used to be embarassed about coupons. In fact, in HS I had a $1 off coupon on the brand of deorderant I used in my car. Well, my then manfriend and I used to drive around for hours just talking and he was digging around my console and found it. He started laughing about saving a $1. And then I stopped trying to use them. But now- I use them ALL the time. I’m not embarassed. I know a lot of people who do and there’s even a basket in our breakroom at work full of coupons. Maybe it’s just a midwestern thing that we have that, but no one around me is shy of using coupons. Heck, I saved $15 on my $50 grocery bill last week and walked out with a ton of food for $35! 🙂

LIke you said, I think there is a big difference between clipping coupons to save money, versus someone who won’t do anything without a coupon. Next time, give your opinions and maybe let your co-workers see that couponing doesn’t have to be negative. Although, I am always for avoiding the drama…=)

Hmmm…I don’t believe anyone is too cool for coupons. Hold your head high, girl. lol