What is it about Girls’ Night that makes me feel so much better? 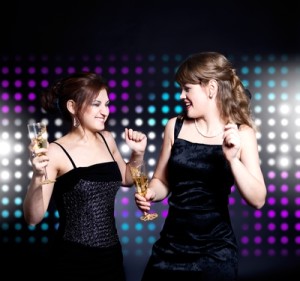 A few girlfriends and I had a Girls’ Night on Tuesday with my friends and I didn’t get home til 11 pm. On a weeknight!

And I had such a good time.

I was pretty stressed this past week. I’ve been nonstop busy at work, I have a 15-page paper due for my class, and I’ve had no desire to do anything really.

So when someone suggested Girls Night, a part of me just felt like it was one more thing I had to do.

However, I forced myself to go. And I’m so glad I did.

What is it about talking to other women about nothing and everything in general that is so stress-relieving???

We seriously talked so much and the conversation just kept going. Most importantly, when we started talking about our lives and personal experiences, I realized how normal I am–something that I don’t feel very often. For example, I realized:

The best part too about Girls’ Night is that usually when I get home after a few hours of nonstop talk with my friends, I’m in such a better mood.

Are you a fan of Girls’ Night?

Also, check out some of my guest posts:

Paying off debt when you’re broke

Three ways we got out of credit card debt

International Day of the Girl and How You Can Help

Nice blog here! Also your website loads up fast! What host are
you using? Can I get your affiliate link to your host?
I wish my website loaded up as quickly as yours lol

Love it! Every Tuesday night I go to my friend’s house down the street for an hour or two. It’s so nice to chat and catch up!!

Absolutely obsessed with GNO. It’s such a mental break from your chaotic world

I love a girls night out, but I think in our older age we settle nicely with a girl’s potluck dinner. ha ha! I think girls can be a great support system for one another…when we’re not being catty. 🙂

Love girls night. I always have the best time and we always say we need to do it more often. It’s a kind of outlet that you can’t get hanging out with your husband. A much needed one! Glad you went and had fun.

I love girls’ nights out. I rarely do them anymore which is why j probably enjoy them so much now.

I LOVE girls’ night. My friends and I are having girls’ night tonight. I am feeling really stressed about some projects I have on my plate right now…but like you, I’m gonna go anyway. I know it’ll help me feel awesome. I think I just have to think of better ways to manage everything.

I love girls’ night out. I haven’t had one with wine getting involved in awhile since most of my friends are pregnant.

I love girls’ nights! We’re having one this Saturday. 🙂

I’m the same way. I’m usually reluctant to go out but once I do I have a great time!

The Death of Google Reader