Do You Believe in Psychics?: My Experience with Psychic Source 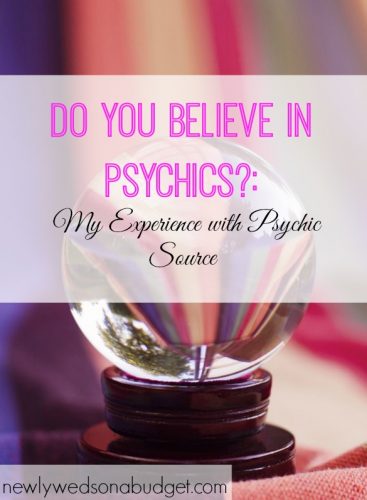 My first experience with a psychic was getting my palm read at a local fair. Everything the fortune teller told me was spot on, and I left thinking “she knew me so well!”

The next year, I went to the same fortune teller and heard the exact same spiel. To say I was disappointed is an understatement.

I kind of gave up beliefs on psychics after that but would occasionally get sucked back in by shows like “Long Island Medium” and through co-workers who were into tarot card reading.

When I was contacted by Psychic Source about doing a free reading, I was definitely interested.

I set up my appointment, called in, and waiting for my reading to begin. Deanna described herself as a Tarot Read/Astroler/Medium/Psychic. She told me that my reading was centered on potential outcomes that are based on things occurring at that moment.

She started out with a basic chart reading and said something about my moon being in Capricorn, and that indicating that I needed stability.

I don’t know much about astrology except for what my sign is but I went with it.

The Good in my Psychic Reading Experience

She said that she didn’t see me getting the position but that she saw me definitely getting another position and that this would happen in April after a lot of reorganizations.

Well she pretty much nailed this, because I didn’t end up getting the position but I did get a promotion.

Also, there is some reorganization going on because we did hire a new manager, and another co-worker recently quit which has opened up another spot in our department.

Predicting the job outcome though was pretty much her only win. I’m not saying that some of the things she said aren’t going to come true, but so far they just left me scratching my head.

For example, she said that in April I would go through a very high-level training at work that would not only teach me about behaving better in business, but would help me learn more about myself.

Well it’s past mid-April, and I have no trainings scheduled, but there’s still time..

Another thing she said was that there is something with water that needs to be fixed and that it would be our biggest expense this year. She said something like a boat or a pool, but we don’t have either.

We did have a Jacuzzi in our backyard that we ended up getting rid of but that was only about $50 for what it cost to take it to the dump.

I’m really hoping nothing major breaks with our water line.

There were also a few things I asked her that I already knew the answers to but that she would give me completely different responses to. So now I’m wondering if maybe my future will change or if she just got it wrong?

To Believe or Not to Believe?

I don’t think my reading would have turned any skeptic into a believer, but as someone who enjoys palm reading, tarot card reading, etc, I always take these things with a grain of salt.

I do think there is some truth in psychics but I also believe there is a lot of room for interpretation and some psychics are better interpreters than others.

Do you believe in psychics?

Continuing our Journey with #BabyMakingDays

The information shared in the blog is worthful. As i m interested in psychic reading this blog will help me to become a good psychic reader. Keep sharing the fabulous work so that we can sort our way out.

The information shared in this blog is very beneficial. As i m interested in psychic reading this blog will help me to become a good psychic reader. Keep sharing the fabulous work.

[…] these four causes of house fires will minimize your risk of experiencing one in your home. Always keep at least one fire extinguisher handy and always in the same place so […]

Super interesting to read! I think your psychic experience went pretty well for the most part! I definitely think that there are some with psychic abilities, I think it’s just in finding the proper one! Thanks for sharing!

It’s really cool that your psychic was so spot on about the promotion. It’s crazy how much your experience really depends on which psychic you go to. This was a really interesting post. Thank you so much for sharing!

Like you say, some psychics are more reputable than others. I definitely believe that the right psychic can give you a real, genuine reading. With so much room for interpretation, it is important though to find the right psychic, and take things with a grain of salt.

I have definitely gotten into shows like Long Island Medium. There’s something about that otherworldly contact that is so interesting to me. However, I haven’t found a good local psychic yet, and have had experiences similar to yours where some things are good and some aren’t.

I’m not sure if I believe one way or the other. It’s really hard to believe but at the same time I don’t rule it out. I’ve seen stories that make me believe that some people really do have those powers but there are so many fakes that you really don’t know what to think. I have never had a reading and it’s not something I would pay more than $10 bucks for if I happened to come across it-just for kicks.

My friend went to a psychic one time and they revealed a lot of things that I was shocked by…so I suppose some of them can be on point but they seriously give me the heebee jeebees!

I think that’s just it, I’d take it with a grain of salt and it’s probably not something I’d spend money on unless I was in desperate need for someone to give me “answers” (even if they weren’t true). That being said, I do believe there are true psychics out there. There just seem to be too many cases where they’ve helped the police or something of that nature not to believe just a little.

I believe in psychics like in horoscope. But, I don’t get affected much by these and make it just a guide. I notice that there are patterns that psychics use based on what we tell them. It really depends on us if we believe it or not. Overall, it seems reasonable that we should be more focus on what is at hand.