Things My Husband Does

I think I’m going to start a new little series on this blog and call it Things My Husband Does.

Before we got married, Eric would always say how he was pretty clean but his mom was the one who was a neat freak and just thought he was messy. But Eric didn’t think he was messy, and every time he had dinner at my place, he always cleaned the dishes right after. I was in absolute heaven.

And then we got married. And I realized Eric’s mom wasn’t a neat freak at all, she was normal. Marrying the youngest of two boys, I soon realized he had also been spoiled. Doesn’t know how to properly load the dishes into the dishwasher, thinks the floor is a better place for his clothes than the hamper, and cannot for the life of him place his dirty dishes in the sink–everywhere else is perfectly okay, such as the coffee table, the dinner table or even the counter right next to the sink, but not actually in the sink.

SO–rather than become a nagging housewife a few months into our marriage (although I admit sometimes it’s hard not to nag) I came up with a funny cute little solution. So far it’s seemed to work, and it’s become almost a game.

I present to you “The Post-It.” 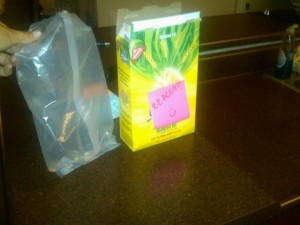 After way too many incidents of “but I forgot to put my dishes in the sink!” I wrote on a post-it “REALLY?” and added a cute little smiley-face to try and keep it light-hearted. I now stick this post-it (we re-use the same one) on the fridge, and anytime there’s something that just makes me go “Really?” I stick it on whatever the offending item happens to be at the moment so that he can see it later when he gets home.

Example number one is above. A completely EMPTY bag of Wheat-thins that had been left in the cabinet. Like, REALLY? You can’t just throw away the box??? Are you planning on saving it? Why would you leave an empty box in the cabinet?

Perhaps next week, Eric will do an edition of “Things My Wife Does” and then I’ll be screwed because I know I do–and say– some REALLY stupid stuff. But we laugh together, we can certainly laugh at each other as well.

marriageNewlywedsthings my husband does
13 comments
0
FacebookTwitterPinterestEmail

The Biggest Moment of Our Lives

Interracial Marriage: A White and a Mexican walk...

It’s okay to be a man

What I miss about being single

When things turn out the way you want...

Things My Husband Does: the Martha Stewart edition

A toast to my husband

Lol, I love the post-it idea! I’ve had similiar issues with my BF who is the youngest of 4.

I’m going to try it this week 🙂

Just found your blog- it’s great! I love that you use the post-it. My husband uses post-it cut into an arrow. He sticks it to whatever scrap of wrapper I leve out (like the plastic ring from the milk jug, or the plastic seal from the inside of the orange juice bottle).

Should I admit that it’s helped??

We have been married almost 13 years. I still can’t get him to push his chair in, close a drawer completely, or pick up his socks off the floor of the living room

I’m laughing thinking about your “Honey…we need to talk.” story

My mother gave me this advice when I moved in with my husband (we’ve only been married for 3 months but have lived together for 6 years); I was 19 and constantly complaining about how he wouldn’t clean up. It was along the lines of the following:

It takes 5 seconds to shut the cupboard door but 10 minutes to tell him to do it, then nag him to do it, then stress the importance of it being done, and then later complain to your mother about it. So just turn of the lights, shut the door, put the trash in the garbage, laundry in hamper, whatever without complaining about it. When you catch him in the act ask him not to do it. He’ll look at the garbage on the counter and throw it away immediately because there is no excuse to leave it there.

This advice worked for us, six years later I can’t remember the last time I had to ask him to do anything along those lines.

Might have to take a stab at this. We’re still in the “Really?!” stage… 3 years later. Ha!

HAHA – J does the same thing ALL the time. I’m so going to try the post-it trick. REALLY? 🙂

Such a dude thing! My friends call me often with similar guy stories. We always end up cracking up about how dudes always pull their dude moves. Keep the posts (and post-its) coming! xoxo

That is so awesome! I kinda wish I could get away with something like that with my BF, but he’d probably never even see the post it note, haha!

I LOVE the idea of the “Really?” post-it. My husband was beyond spoiled when we moved in together! He didn’t turn off lights after leaving rooms, he got toothpaste all over the mirror (still does) when he brushes his teeth, he leaves empty boxes in the cupboard and refrigerator. Oh my gosh! But it’s a work in progress! I might have to steal your idea though!