Now that I have my brand new (painted) red coffee table, I want to find pillows to put on our couch to make the color pop.

I hated throw pillows. Like really, I swore to my mother I was never EVER going to own a throw pillow because they were so stupid and they just took up space and if you put them on your bed, they served absolutely no purpose and you had to take them off and put them on every day!

Honestly. I hated them. And now…I am dreaming about throw pillows.

I made the awful gut-wrenching mistake of stopping at Pier 1, which just so happens to be next to TJ Maxx. And found these beauties… 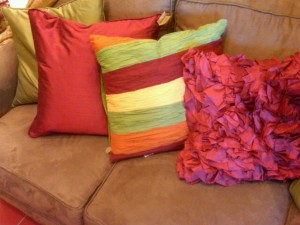 I love them so much! 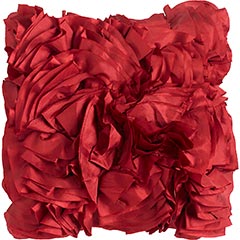 I MUST have this pillow! I absolutely LOVE it! The Ruffles…I just can’t get enough! 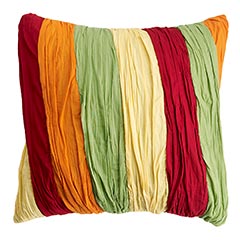 I love the colors, perfect for fall or spring! 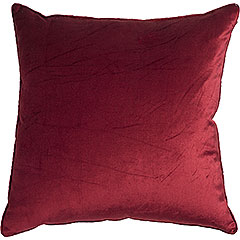 This would be my “balance” pillow to balance out the styles from the other two. 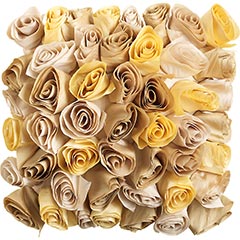 This would be my “springtime/summer” pillow and it’s currently on sale!! (I would take away the garnet pillow and decorate with this one instead during the warmer months).

In total, the pillows would cost $100–that’s five weeks’ worth of allowance! Not including tax (7.75%) or that extra green pillow I saw in the store which I can’t find on the website. I don’t care what I have to do…I am going to get these pillows. And sooner rather than later. Maybe not with my next paycheck…but the paycheck after that!

There are certain things worth sacrificing for…and in this case, it’s throw pillows!Have I gone completely crazy that I’m willing to spend more than $100 on pillows?

You know how I said I either shop or eat? Well, I left Pier 1 Imports with nothing…so I went to Golden Spoon instead and spent $2.50 on a mini fro-yo. Best $2.50 I’ve ever spent.

Great Finance Blogs for Newlyweds on a Budget

How To Finance Your Wedding With No Savings...

Making some money in creative ways (without becoming a stripper) » Newlyweds on a Budget September 21, 2010 - 5:34 am

[…] Garage Sale. Sometimes in order to get new things you have to get rid of old things–and what better way than to sell them? My mother-in-law is having a garage sale this weekend and offered to let us sell some of our own items. I’m taking mostly clothes and some wall paintings. My goal is to make $50 (I don’t know what’s normal for a garage sale since I’ve never done one before!) And I plan on using all $50 for my pillows! […]

I ditto what Rebecca said… I now need these pillows, and there’s nothing wrong with my pillows!

I think I am going to redecorate my bedroom soon as I need to buy a new bed (headboard, etc.), and I’m going to go all out with pillows!

Just make it work in your budget!!! Cut back somewhere else so you can buy these guilt-free!! 🙂 Because I think you NEED them…and now I’m starting to think that I NEED them too…..uh oh….

Here’s How to Look Runway Ready for...