It’s been more than a month since Eric quit his job to go to school full-time for the firefighter academy and we’ve been living off my income.

A year ago, when this situation first become a possibility, I stood firm and said “No way. How the heck are we going to live off of just MY income?” I knew exactly how much money it cost for me to live on my own, and my income accounted for just ME. How was I supposed to support another individual on the same income?

After college, I lived with my parents until I was 25. I started out working 4 part-time jobs just to pay my student loans, my car loans, my cell phone bill, car insurance, and rent for my parents (a whopping $300, cruel parents, I know). With every job I got, I made more and more money, but I knew I needed a certain amount before I could officially move out on my own. And that didn’t happen until 2009, and I was 25. Six months later, Eric and I got married.

With my new job last year, I got a small bump in pay in my salary ($1,600 more annually than I was making at my last job, if you really want to know), so to be honest, my salary now is still only what I was comfortable for living on my own–not supporting a husband and a dog furry child.

Money is tight, to put it bluntly. It is not comfortable living this way. We do have reserves in our savings account, but as much as possible, I try not to depend on them. Last month alone, we had to take out almost $3,000 to pay for registration, uniforms, boots, supplies, books, the most expensive doctor’s physical known to mankind,  and everything else in between. The less amount we can take from savings the better.

I get paid twice a month, on the 8th and the 23rd. The first paycheck covers all our bills and extras and the second paycheck covers our rent (and that’s pretty much it). However, a third of my paycheck is still being distributed to our savings account since that’s how I set it up with HR and don’t really see a need to change it. So although we only automatically receive 66% of my paycheck every pay cycle, I also grab the other 33% if necessary out of savings. And it’s usually necessary.

Between the 23rd of August and Sept 8, we were essentially living off of our credit cards. We had to pay for Eric’s trip for his fire chief’s interview (gas, hotel, food), Bentley had to go to the vet ($100), we went out with friends more than we should have, and several hundred dollars later, here we were.

I also had Spending Envy.

In August, we spent several thousand dollars on Eric, Eric, Eric. What about Erika, Erika, Erika? How come I don’t get to spend any money on ME? I realize that it’s really childish of me to be jealous of my husband, whom is attending the fire academy to further his career, but, but, but….

Does anyone else ever have this problem? I know there are a ton of people out there whom have had to support their spouses through going to school full-time and such. How do you not get jealous? And how do you control your spending when one spouse receives an extremely disproportionate amount of the income?

There must be some secret people are not telling me. Or maybe that “selfless” gene just sort of skipped over me. It’s been known around my family that I definitely lack in the compassion department…

I lived by the motto “Work hard, play harder.” Now it seems to be “work hard, don’t even think about playing.” It sucks. I know it’s only for four months, but I still need to keep my sanity these four months. 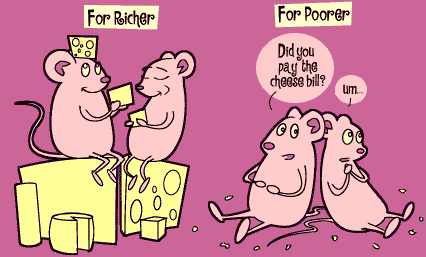 Walgreens and my family’s wellness

How to prepare to be a one-income family

I think it’s normal to feel like you want to enjoy some of the fruits of your labor. You’ve been working very hard at a job that you love and the money has to go into the family pot, rather than you’re own fun money. Maybe there’s an inexpensive treat that might make your day (or month)? xoxo

I can totally relate to this. We were paying for my husband’s school a couple of years ago, and we would pay thousands of dollars . Granted, he worked too, but it seemed that all our extra money went to him. I think that’s probably a little bit of just plain human nature. As a previous commenter said, just think of this as a season in your lives. One day, you’ll look back on it and laugh at how little money you had. Until then, enjoy the free things 😉

I’m having spending envy too these days…
We have a couple friend who just bought a house and have been furnishing it like CRAZY. Seriously I think they’ve spent at least $15,000 on furniture and decorations. Granted, it’s a big house and they’re getting married in October, but even so.
I wish we could do that but it’s just not feasible! Still I get jealous.
Anyway, my main point of this comment is to say that we’re considering going down to one income as well, because I’m strongly considering going back to school. This would happen either early next year or around June or July, so we have some time to plan. It’s made me REALLY think about what I want to buy, or when we want to eat out, however. I was wondering if you could do a blog post (or if you already have, then that’s great too!) about how you prepared to go down to one income because, to be perfectly honest, I’m terrified even if this is what I want to do.

Omigod. Tell me about it. My fiance makes less than me, but makes up the majority of our spending – motorbike and car expenses, spending money, gym, expensive clothes (he doesn’t have much but because he’s big and won’t cheap out on things like shoes, for example, that gets pricey). Bah.

I love the picture!!
Mr. is going into school and so for everything thing he has bought I have gotten something too. I’m at two pairs of shoes, two new dresses, and a bunch of new workout clothes. I am curious as to how you’ve been keeping your sanity with him in school for full time. It’s so hard living off of one income

I definitely get envious of my married friends (which is almost all of them) who seem to have so much more money than me. Their husbands are all working jobs that make decent money and so do they, so with two good incomes they “appear” to be rolling in the dough! I realize this may not be the case, but when all I have to rely on is me and I don’t have any money, I get jealous.

Oh I feel it too!

This is exactly why each of us has an allowance. If it is for school/work (my textbooks, new suit, travel to an interview) it comes out of our shared money (we actually have an account for that in our savings) but anything frivolous (pedicure, dress, girls night, trip to the beach etc) comes out of my weekly allowance. This way I can get as much envy as I want – if I don’t have the money, I can’t spend it!

I’ve had spending envy. I’m so glad someone else has felt this too! Except it wasn’t school stuff for my hubby.. he has a “tradition” of going on several big expensive guy trips during the year.. a long weekend of golfing that runs about $400, a week in Arizona to play baseball that runs about $800 and a long weekend on the coast in the fall that runs about $200. We’ve had huge fights over this because i’m like “I don’t get to do girls trips, why do you get to do boys trips?” and he always says “I’m not holding you back! go on girls trips!” but if we BOTH went on long expensive trips, we’d really be broke. So for some reason, he gets to go (since he’s been going since college and before I met him) and I get to do… nothing. So not fair! We are still trying to work out how to make this whole situation more fair. So I feel ya.

I’m in the same boat as The Coach’s Wife! My husband goes on 2 golf trips a year: one to the Adirondacks and one to the Carolinas. It is SOO MUCH MONEY! He says the same thing that if I want to go on a trip, I can but I know it will be too expensive and I cant justify spending that much money and vacation time without him being there too.

I do have spending envy. Sometimes its not with my husband, but with other couples in our same life-stage. I see people going to dinner, shopping, taking trips and I get down on my lack of ability to spend. I also feel super inadequate because I was unemployed for our whole engagment and although I have a job now, I make less than 1/2 of what he makes. It makes me feel like I dont have as much of a right to our money, but that’s how we see it: OUR money. I’m so glad he sees it that way too and we spend/save/splurge/suffer 🙂 together.

I haven’t experienced this exact situation, but all I can say is that I’m so thankful I’m not the bread winner. When the fiance and I tie the knot, his income could basically support us and mine is gravy, because, like you, mine is good for, well, ME and that’s about it.

On the flip side, I suppose I would feel those jealous feelings if he ever brought up the idea of wanting to go back to school. If he ever quit or lost his job, I would freak the eff out. And that’s not really fair to him.

I guess this is why people tell me marriage is all about compromise?

Just think when Eric gets back to working, you’ll feel rich after this season of pinching pennies 🙂

I get that way too sometimes. Not with M so much as say, my sister, or a friend, or whatever. If they get, I want! LOL! But ya know, you are doing so good balancing it all and being responsible and looking ahead at your future. I really commend that!

It’s so hard!!! When we were living on NOTHING so we could put all of our money toward our move, it got really frustrating. The only thing that helped me is remember that it was just for a season – it wouldn’t be like that forever. There have been times in our marriage where it felt like a lot of money was used for me (new work clothes, etc) and then a lot for Porter – somehow it all seems to balance out, but it’s frustrating when you’re in the middle of it!! 🙂

When can we get together?! 🙂

My husband’s and my money are totally seperate in every way, so we buy what we want when we want and manage our own money and our half of the bills. (I’m lucky he’s responsible! Just not that clean…) I think if I was in your situation where I wanted some new things – I’d do all my shopping at Ross. You can get a little something and it doesn’t cost a fortune. Or swap purses with a friend for awhile so you feel like you have something new.
What about having a garage/yard sale to make some extra money on stuff you don’t want anymore? Just thinking out loud here. 🙂