Who should pay on the first date? 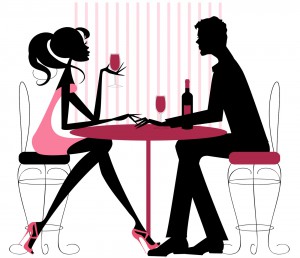 A friend of mine (let’s call her Jane) went on a blind date. The young man, once he received Jane’s phone number from a relative, called Jane up and invited her out to dinner.

They met up for dinner. He ordered for Jane. When the bill came, Jane did the obligatory “reach for the wallet” to which the Date said “Split it?”

They split the bill.

Jane said the date did not go well.

As women, who eschew traditional gender roles, should we no longer expect a man to foot for the bill? Even on the first date?

Or is paying on the first date, not so much a sign of traditional gender roles, but an olive branch of chivalry? A gesture of good will? An invitation of “I like you, and I’d like to see you again, so I’m willing to make a financial commitment to make that happen” ?

Is it an oxymoron for women to expect to be treated as equals but still want to be wooed? Can we not have the best of both worlds?

For example, as much as I hark about wanting an equal marriage where my partner and I have equal responsibilities–the reality is that it is most likely never going to happen. Relationships are almost never 50-50.

So shouldn’t it be okay to be a feminist but still want to be wined and dined–at least on the first date? Would it not be the same if a woman made a home-cooked meal for a man? She does it out of the goodness of her heart, and not because of traditional gender roles.

Is it okay for us to want to be seen as equals but still want to be treated as ladies?

Who should pay on the first date?

Things We Prefer to Not Live Without

Next please!
A MAN should ALWAYS pay on the first date. Hell, I think a man should pay unless the couple is actually in a committed relationship. Then it is okay to start splitting, alternating, etc.

I think the man should pay for sure the first few dates, but I am southern. Also, if he asked her out and ordered, he should definitely pay.

As for 50/50 in a relationship – you are right it usually isn’t and for people to expect it to be and keep track and try to make sure that it is are only going to be stressed out and unhappy. It doesn’t make for a good relationship! Things ebb and flow in any relationship in every area. Lately my dh has been doing all the dishes – but for 16 years I did them all. Sometimes I do more of something, sometimes he does. It all evens out in the end and as long as we genuinely want to help each other out the relationship goes very smoothly.

Tricky tricky. If she reached for her wallet, I can see why he asked to split it. Sure, she might have just been doing it to be polite, but some people have strong feelings about paying for themselves (even on a date). He might not have wanted to get into a “no, I’ll pay!” style struggle and was following her cues.

If he asked her out and ordered her meal at the restaurant, then I say he should pick up the check. Then again, I would never allow someone to order my food for me, as I’m not a child. I like the idea of a bit of chivalry on the first date. In cases where money is tight, there are lower cost options like a cupcake and coffee. What’s important is that you talk & get to know each other.

Years ago, a guy friend/potentially more called me up and asked to meet for dinner. We grew up in the same town, and sparks had flown in the past, but then he went away to school on the other side of the country. Finally, we lived in the same city. He wasn’t all that familiar with the area I lived in, so I offered up a few suggestions of places to eat, and he chose the restaurant. He ordered an appetizer (I didn’t) and a rather pricy entree – but at the end of the meal, he had some flimsy excuse, and I ended up picking up the check.

That’s a big red flag for me. At the very least, I would’ve expected that he paid his own way. I wasn’t impressed, and lost interest. The only time I ever saw him after that was bumping into him on the street by chance.

I think the asker, male or female, pays for the first date. Dates can be coffee, they don’t have to be expensive.

Also, if a guy had ever ordered for me (seriously old fashioned) I would have expected him to pick up the check. If you’re going to pick what she eats and allow her to split the check that’s the equivalent to a girl picking the groceries and cooking for you, and then her asking you to reimburse her for your half of the food. Rude.

The guy should pay for the first date but then the girl should spring for coffee and dessert later. I think its also ok if whoever asks for the date should pay as that is only fair as well.

lSecond date. Guy orders appetizers and orders two pizzas that we share.. Bill comes I offer to pay. He doesn’t fight it.(not even a bit) Okay…cool he paid date one.

Obviously I’m in the minority here but I would fully expect the guy to pay for the first date, the second date, the third date….probably until about six months in. My dad told me that if a man can’t at least pay for dating that he probably wasn’t capable of supporting me or a family long term. I never offered to ever pay for dates. I always dated generous men who happily picked up the bill. They usually had more money and they always paid.

I think its very weird he ordered for her too.

“He ordered for Jane.” If I were Jane that’d be the end of any possible relationship right there.

If the date is good, and the guy asked me out, I’d let him pay while sincerely offering to pay my share. But then when I asked him out on date 2, I’d let him know that I was good to take care of the check.

If the date sucks, I would 100% insist on paying my share (I’ve actually done this many moons ago), so that there’s no “expectation” on their part. And then I get pretty clear that it won’t be happening again no matter who pays.

I say whoever does the asking, does the paying, at least for the first couple of dates. Then take turns. Splitting the check seems too finicky to me.

That said, if a guy asked me out on a first date, I’d always offer to pay my share (obligatory wallet grab, haha), and I wouldn’t be put off if he took me up on it. That said, it’s only happened a couple of times, and only ever on dates that never resulted in a second date. So maybe you’re right that it’s more of a gesture of good will than anything else?

In similar fairness, I’m more insistent on paying my share if I am fairly sure I won’t be accepting any future invitations.

I think whoever asks should pay. He asked her, he should pay. She asks him, she should pay. After that first date (or second – if he asked me & paid, I’d want to reciprocate), then they should split it.

I also saw the “He ordered for her” Ceci caught- typo? or just weird. if someone tried to order for me (unless i went to the bathroom and specifically told them what I wanted) I’d high-tail it right out of there.

As a guy, I would never take a blind date out for dinner unless I knew her. I would go for coffee, dessert or some other short date to see if there was interest first. Sharing the cost is something much later.

Wait, he ordered for her? I think that’s weirder than splitting the check.

I do think it is a double standard for women to want to be treated equally in the workplace and then expect old-fashioned dating values. Not that you have to refuse the offer it it’s made (a kind gesture is still a kind gesture).

I would offer to split the check and mean it, but I would be appreciative if my date offered to pay. I think of it like going out with my girlfriends. Sometimes we treat each other, but nobody would straight up expect someone else to pay for them.

I think whoever asks, pays! I think most guys are pretty traditional and want to pay for the date too. I also think it’s weird that he ordered for her and then expected her to split.

Funny you wrote about this. I have a draft waiting to be posted on the same topic, because a friend recently brought up the same exact issue. My take it this… Women and men should split the first bill. Think about how many dates a man goes on that end after the first date. Why should he have to pay for a woman he may never see again? In this day and age a lot of women make comparable salaries to their male counterparts and some make even more. I think women are unfair in this regard. They don’t expect to clean the house and cook all the meals, so why hold onto this outdated model?

As an old timer (my last singles dating experience was in the 1970s), I may view it a bit different.

The rule of thumb then was that the asker (male or female) paid on the first date and the question of splitting was usually resolved on any resulting future date. That doesn’t mean that the question didn’t come up earlier: it did at times. Then it was usually based on relative ability to pay. (For example an executive and a grad student was usually paid for by the executive independent of gender.)

So my answer is: asker pays unless prior arrangements or financial ability dictates otherwise.

I think if the man invites her out, he should pay. At least the first date. After that, split the checks.

Tricky. I don’t think women should reach for the wallet if they don’t intend to pay or don’t want to. I think she was expecting him to pay and was turned off when he didn’t which is unfair to the guy. Paying for the first date is more of a chivalry thing, imo, similar to opening the door and holding out her seat.

If the date was bad I prefer to split the bill so I don’t feel like I owe the guy anything (like a second date). Of all the guys I dated who turned out to be keepers, they paid for the first date. As a female, I am not crazy old fashioned but when it comes to the first date I prefer the guy to pay. I also choose cheaper first dates such as meeting for a drink. Worst case is it is a disaster date, the final cost is a drink $5-$7, and I’ve only lost an hour of my time. I did go to dinner once with a guy who right before the bill came said he had no cash but if I paid he could go to an ATM afterwards and pay me back (like I wanted to follow him to a bank?!?!). In my mind I was thinking (you can use your debit card) but I paid anyway and never saw him again.
digging-my-way-out