FinancesLove and moneyThe Mr. and Mrs. 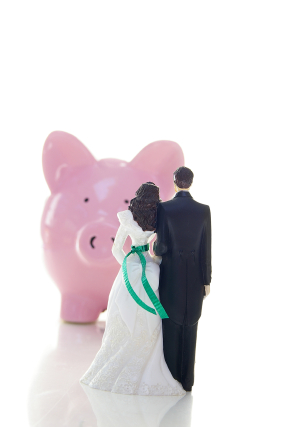 Eric and I had a disagreement about money this weekend. We don’t usually disagree often, but when we do, you can bet that 90% of the time it’s about money.

This time it was something we’ve discussed many times before: how much money Eric spends on food while at work.

Working 24-hour shifts, Eric is responsible for paying for his own dinner at the fire station. The guys that work the same shift, all pool their money together, and with that money, they purchase groceries for the evening. At his new station, Eric only has to pay for his portion of the dinner groceries (as opposed to breakfast and lunch).

He eats breakfast at home, and is on his own for lunch, meaning he can either bring something from home (like I do every day), or buy something. He can also bring snacks from home.

However, the last five 24-hour shifts Eric worked (which is considered a full work rotation), he spent a total of $144, or almost $30 a day.

Then the excuses started:

Between me being angry and frustrated and Eric getting mad that I was making him account for his expenses, we were getting nowhere.

We took about 10 minutes apart to cool our heads and then I tried a different approach.

I get mad when I think you’re being wasteful with money–and when you’re spending $30 a day on random coffee purchases and snacks that you can’t even account for, that means you’re being a little trigger happy with our finances.

I would really appreciate it if you could make a more concerted effort to be more mindful of what you’re spending money on.

When I was able to explain myself in a calm and collected manner, Eric was better able to understand where I was coming from in regards to our finances and he completely got it.

I felt like money was being thrown down the drain on these small purchases that Eric kept making that quickly add up ($5 coffee here, $6 fast food lunch there, $8 snack attack here…). We both agreed on a reasonable budget that Eric could stick to, that would allow him to make small purchases but that would also encourage him to stick to a budget.

It wasn’t always this easy for us to resolve disagreements about finances, but I’m really glad that we’ve been able to get to this place.

How do you and your spouse resolve conflicts when it comes to finances?

A reminder that I’m old…but young

I REALLY Love My Dog: Orange County Race for the Rescues

Scams in 2020 You Should Know About

5 Subscription Services You Should Try

How Couples Can Save Money At Christmas Time

How to Figure Out Your Newlyweds Net Worth

5 Side Hustles For Couples

5 Signs You Need a Financial Advisor on...

Can You Trust The Twine App With Your...

Borrowing Money From Your Spouse? Good or Bad

The Spender is Negating All the Gains of the Saver in this Relationship | Tiny Apartment Design September 16, 2014 - 11:00 am

My husband (as of 11/3/13 actually) is a fireman and one of our biggest disagreements is the trips for snacks, etc. while on duty. Especially buying for other people and then the question of where the cash goes. Not to mention, at my Hubby’s fire station they sometimes cook but then sometimes don’t so my constant question is why he can’t take sometime I’ve cooked and frozen and heat it up for himself and save money on those dinners as well? Any advice on that subject?

5 dollar coffee, 8 dollar snacks, holly cow, what kind of coffee and snacks is he getting. I totally agree with what you are saying (the writer) why spend 30 dollars a day when it can be waaay less, It ends up in the toilet anyway hahaha

A lot of our conflict resolution at home boils down to clear calm communication and compromises through out. Screaming at each other rarely gets us anywhere. Argue your point calmy, logically while pointing out the benefits to you as a couple and usually it just works!

That’s great that you have come to a point where you can actually work these disagreements out amicably. That is all part of marriage and if you never figure out how to get through these things you are doomed! That is a lot of money to be flitted away on food and really just couldn’t let it go. There is always a reasonable compromise that can work out. The way we do our money we have separate and joint. It works because I zip my lip about what he does with his own money as long as the joint accounts are properly funded and the joint money is not “misappropriated.” Before he switched jobs he was eating out almost every day and that comes from his money. Now he brings lunch from home which comes out of the joint money since it’s groceries. We are using more of our grocery budget now which is fine.

When we first got married we had so many disagreements over this. I eventually had to figure I had to remain calm when I told him, because if I got defensive it would turn into an argument. It’s taken almost three years, but it’s getting better. Mostly because he has a cash allowance where I can’t see what he spends money on.

Well, you do need to be tactful when it comes to this, that’s clear. He’s defensive about it, but, once he’s doing he math, he should see that a lot of money is being spent. That’s why tracking your expenses sheds sooo much light on ‘where the money goes’ 😉

All work food and drinks are taken in from home and there is also a limited budget total for the month that can be spent for “on the fly” purchases. The wife and I usually talk about the finances before spending so the other has some input as to why and how much? Communication, compromising and a common goal is probably key for us.

That’s great that you were able to convey your feelings to him in a constructive way. Sometimes it can be hard! My boyfriend mostly pokes fun at my saving mentality. What I see as a big deal, he doesn’t. Other than that, he does tend to eat out more at work, but he tries to use the tip money he gets, so it doesn’t really impact his finances. We have so much to take from home, I’d be a little disappointed if he were spending $15ish on food every day.

We have an allowance for lunch, snacks, gas etc. That allowance is replenished every two weeks so we each have to make it work until the next allowance. If it were not for that we would be loosing track also.

Good for you two for being able to talk an a calm and rational matter. Most couples fail at this. Money can be a very polarizing subject.

I actually just posted about a money disagreement that he had and that I let him win. 🙂 http://www.budgetblonde.com/2013/11/hubs-wins-money-discussion.html I enjoy reading about how other couples handle things because it helps me too!

We used to have little fights like these, but ever since we both got phones with mint on them there are virtually no fights over little stuff like this. There are separate budgets for coffee shops, fast food, and the cafeteria at work. He knows how much he can spend and it totally eliminated the fighting.

I hate when I get all angry and upset and what comes out is not what is rationally in my brain. So good to step apart and come back and really explain it when you were calmer. I agree with you totally, it is wasteful spending vs. the other purchase examples. I always wonder how so many eat out every single day, in part the $, and in part, the calories! Not even worth it half the time. separate topic LOL. good post friend!