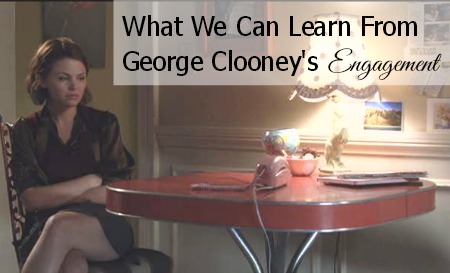 So the world’s most eligible bachelor got engaged and thousands of broken-hearted single girls everywhere screamed a silent “WTF?”

I don’t think there’s ever been a case more prevalent to prove that he’s really just not that into you.

How silly of us. All this time, and we thought it was just a clever cliché.

Lots of hot girls loved being graced with the title of “George Clooney’s arm candy,” but since he has adamantly insisted that he would never marry, no one was really ever surprised when the relationships would fizzle.

I almost smirked when Elisabetta Canalis got all furious when she was dumped…like come on, honey, did you really think you would be the one to change his mind?

And yet, women tried. Over and over again.

When men say “I don’t believe in marriage,” it’s as if we take it on as our personal mission to declare: “Wanna bet?”

I watch a ton of trashy TV. Seriously, a ton. I have no shame in my game.

But the one show I could never bring myself to watch was The Bachelor.

Women fighting over the superficial affection of a man who obviously wasn’t hot enough or secure enough to find a girl on his own in the real world?

I never wanted to be one of those girls that fights for the affection of a man.

After a 4+-year relationship ended in my early 20’s, I was a dating queen. It’s nice to be doted on, right?

But there was one guy—the Rebound—whom I fell hard for. It was only after a few weeks that I realized I was way more into him than he was into me—and I just couldn’t have that. So I quickly shut it down.

My friends, of course, made fun of me. They always told me that I couldn’t expect for guys to be serious after just a few months. But I stood my ground.

A few months is plenty of time to decide if you like someone enough to see where it goes.

If I was dating a guy, I wanted him to be crazy about me, not lukewarm. I didn’t want to be an option, because I knew I was worthy of being a priority.

I knew I had made the right decision in letting the Rebound go when he came crawling back a few weeks later.

It turns out that when I told him I didn’t want him, it just made him want me more.

Crazy how that works, huh? Like, when has anyone ever wanted something they couldn’t have?

Anyway, that ended up fizzling and I went on to date a string of guys that really liked me and that I sort of liked. Some of those relationships were sort of to pass the time. They were nice guys, and I definitely felt like they were someone I should be with because they were nice.

In fact, it wasn’t until I met Eric that I felt like I had finally met my match. He was the one that made me turn into Ginnifer Goodwin staring at my cell, taking it into the shower with me, because I would lose my shhhhh if  I missed a call from him.

And then when he would finally text, I would start my timer and make myself wait five whole minutes before I replied.

Oh yeah, I was cool.

After about two weeks of this nonsense and realizing that I was turning into that girl and getting scarily close to just becoming George Clooney’s arm candy, I finally told him that if he ever wanted to hang out with me again, he better give me more than 48 hours advance notice.

That night, he showed up at my place with chocolate and cheese (be still, my foodie heart), and a week later, I told my mom I was going to marry him. And sure enough, we were engaged a month later.

What am I getting at?

Unless you want to be arm candy, then that’s okay too. But if you don’t, if you want the commitment, and the respect, then don’t settle for being arm candy.

When a man says he doesn’t believe in marriage, believe him.

I’m no expert in relationships—not even close. But it breaks my girl-power heart to see so many women throw themselves at men, try to change them, and relegate themselves to becoming options rather than priorities.

I don’t know much about George’s new girl, except that she seems incredibly smart and successful and seems to have her own life independent of Clooney’s. It makes me wonder if that had something to do with it…

Where to Stay in Cabo

Why I’m Looking Forward to Turning 30

I love this description of The Bachelor! I don’t see how those girls can stand to look themselves in the mirror.

Great post! I was the “georgette clooney”. I just never wanted to get married. I went about doing my thing, work,travel. I only let myself down once with an ex. He couldn’t handle a successful woman. It took a while to let go, then of course he proposed! No, thank you. I would have been miserable. Everyone was shocked when I got married at 42, he’s a keeper. I knew it shortly after we met. My family was shocked since l had been adamant about no marriage and no kids, but they love him. Never changed my mind about kids though.

I agree! My big takeaway was that the woman that hooked him was one that didn’t need him. She’s got her own life and her own things. She wasn’t just playing hard to get, she was hard to get! My husband and I have been together so long (we met when we were 16!) that there’s no playing hard to get here, but I could definitely do to get more of my own things. It’s something I’m working on.

We, women should be independent enough and learn to love ourselves first. I would be turning 29 this month and I know that I’m fully matured enough when it comes to relationship, I know my priorities and I know where I should stand.

Every woman needs to learn to be independent and take care of their own crap first. Too many girls see their identity in their significant other’s only. I’m not a slave, I’m a partner in this relationship, so either get used to it or get lost.

Thanks for publishing! Love it!

I’ve missed these kind of posts from you. This is how our friendship began, remember?

Love this, and I also love your tales of dating. I was with my ex for two years, and things were kind of losing steam. We broke it off, but then I realized I regretted it. Worst decision ever. I spent the summer at his beck and call, trying to get him back. I met my current boyfriend at the end of that summer, I forgot all about the ex, and haven’t looked back. It really is a waste to throw yourself at guys and try to change their mind. If they don’t know what they want, that’s their problem, and we shouldn’t wait around for it. Glad I learned that lesson young.

A-friggen-men sister! That lesson is only something I learned as I got older. There is a line from one of my favorite movies that I love to use. It’s from Singles and Bill Pullman tells Bridget Fonda: “are you his Miss. Right or his Miss. Maybe?” I remember being younger and a guy I was seeing said to me “I just don’t want to hurt you.” OMG. And I stupidly kept trying to win his heart. If I guy said that to me now I’d be like, “well, that means you ARE going to hurt me and you saying this gives you some kind of free pass, so see ya later!” I do hope I find my match someday though!

Why White Elephant Parties are the Dumbest...

On Netflix, Justin Bieber and links

How do you really feel about sell...