Investing for Your Kids: Strategies for New Parents 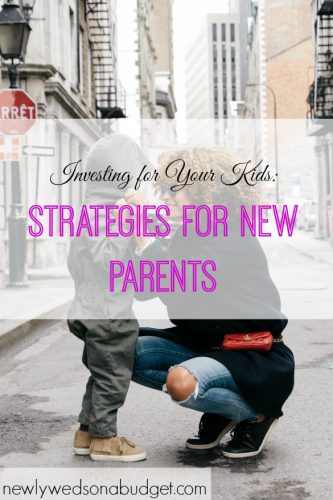 Millennials are having babies. About 20,000,000 of them have already done so. And there are plenty more where they came from. If you are reading this, you have likely already had a kid or two of your own. Or you are probably thinking about taking the plunge. In either case, there are some important financial considerations to make. One of these is investment. All new parents should have investments for themselves, to help cover the challenges and income-deprived years of retirement. But that’s not the kind of investment we’re talking about here. Many new parents are starting to invest on behalf of their young children.

This strategy has many advantages for the child in question. The money that accrues over the next 18-or-so years could one day pay for a college education, for a house, for a wedding, or any other number of important life events. Or your child may just decide to leave the money in his or her account when he or she comes of age. With twenty or more extra years to enjoy the benefits of compound interest and a (hopefully) growing economy, this is an incredible way to help you child to get ahead financially, all without having to put in a ton of money all at once. This is just an outline of one model for investing for children. There are plenty of others.

For instance, there is Forex trading. Forex is the opposite of long-term investments, usually built upon index mutual funds or their equivalent ETFs. Forex trades can resolve in hours, days, or weeks. Furthermore, it’s a system that will earn the user more money according to how much skill is learned and applied to each trade. For those who are unfamiliar, Forex trading is all about currency values. Most brokers divide currencies up into pairs. The real world value of each currency is noted in the exchange rate between the two currencies.

It’s up to the investor to correctly anticipate how these values will change over time. In a given investment example, an investor might anticipate that currency A would grow in value relative to currency B, over a period of 6 hours. The investor might think that this would be the base because that morning, Currency A’s treasury department announced that it would be lowering national interest rates. The investor put in a lot of money, and at the end of 6 hours the value of currency A had indeed grown, even more than the total anticipated. The dividends released were in proportion to the amount by which the value exceeded the anticipated final value.

Losses are incurred the same way, meaning that this is a high-risk endeavor. But because Forex relies on the skill and insight of its investors, it’s a controlled risk more so than low-risk index mutual funds, which rely on a mindless market. While Forex wouldn’t be recommended for people unwilling to take the time to learn (using one of most brokers’ free tutorial accounts), it’s a reliable alternative to long term investing, for new parents around the country.

Learn to Sew and Always Look Great on a Budget!

Honeymoons on a Budget – Romance and Bank Balances!

[…] Investing for Your Kids: Strategies for New Parents […]

I see you don’t monetize your blog, don’t waste your traffic, you can earn extra cash every month.
You can use the best adsense alternative for any type of
website (they approve all websites), for more
info simply search in gooogle: boorfe’s tips monetize your website

I see you don’t monetize your website, don’t waste your traffic, you can earn additional bucks every month.
You can use the best adsense alternative for any type of website (they approve all websites), for more details simply search in gooogle:
boorfe’s tips monetize your website

If you want to take much from this post then you have to apply such strategies to your won web site.

It’s a shame you don’t have a donate button! I’d most certainly donate to this excellent blog!
I suppose for now i’ll settle for bookmarking and adding
your RSS feed to my Google account. I look forward to
brand new updates and will talk about this blog with my
Facebook group. Chat soon!

Great post. I was checking continuously this blog and I am inspired!
Extremely useful info particularly the ultimate phase 🙂 I handle such information a lot.
I used to be looking for this certain info for a very long time.
Thank you and good luck.

[…] Investing for Your Kids: Strategies for New Parents […]

If you are going for best contents like I do, just go to see this
web site every day because it gives feature contents, thanks

Remarkable things here. I’m very happy to look your post.
Thank you a lot and I am looking forward to touch you.
Will you please drop me a e-mail?

Have you ever thought about adding a little bit more
than just your articles? I mean, what you say is fundamental and everything.
But think about if you added some great visuals or video clips to give
your posts more, “pop”! Your content is excellent but with images
and videos, this site could definitely be one of the most beneficial in its field.

Can I simply just say what a relief to find a person that really
understands what they are discussing online. You certainly realize how
to bring a problem to light and make it important. A lot more
people have to read this and understand this
side of the story. I was surprised you aren’t more popular given that you surely possess the gift.

I am regular reader, how are you everybody? This article posted at this site is actually nice.

Hey, I think your site might be having browser compatibility issues.
When I look at your website in Chrome, it looks fine but when opening in Internet Explorer, it has some
overlapping. I just wanted to give you a quick heads up!
Other then that, amazing blog!

Oh my goodness! Incredible article dude! Thanks, However I
am having problems with your RSS. I don’t understand the reason why I can’t join it.
Is there anyone else getting the same RSS problems?
Anyone who knows the solution will you kindly respond?
Thanks!!

Appreciating the hard work you put into your site and detailed information you offer.

It’s great to come across a blog every once in a while
that isn’t the same outdated rehashed information. Great read!
I’ve saved your site and I’m adding your RSS feeds to my Google account.

What’s up, after reading this amazing paragraph i
am as well delighted to share my experience here with colleagues.

After looking into a handful of the blog articles on your site, I honestly like your way of
writing a blog. I bookmarked it to my bookmark webpage list and
will be checking back soon. Take a look at my website as well
and let me know how you feel.

Nice answer back in return of this issue with solid arguments and describing
all concerning that.

If you’re a fan of 3D films, but you’d like the experience to be a bit
more personal, this just might be the device to watch in 2013.

As part of the endeavours made in order to deal with Human-resources difficulties, it.
Its main audience will probably be gamers going forward, but that
doesn’t mean there aren’t other uses for the device.

I think Forex is a strange investment to choose for a kid. Trading FX is like having a full-time job.

The key advantage you have when investing for a new-born is that you can leave the money alone for 18 years. So a diversified portfolio of low-cost ETFs would be more appropriate.

How much did they pay you for this garbage post? Do you invest in foreign currency? I didn’t think so.

There are lots of investment instruments these days, for example property such as house, apartment even jewelry investment. Each of us decided suit to our finacial situation and passion.