Surviving Life with a Newborn 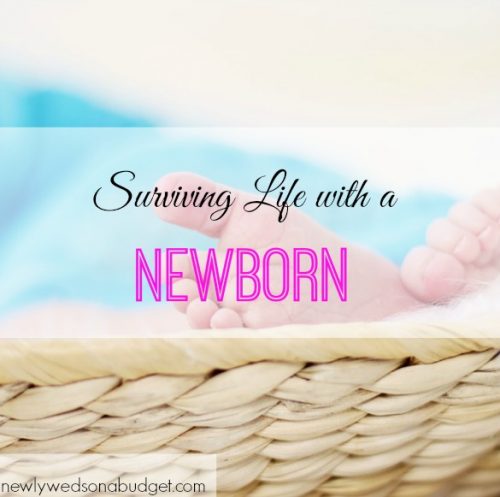 I’ve been meaning to write. I really have.

Every night, I go to bed with the best intentions for the next day. I go over my to-do list in my head, and I think “Tomorrow will be better. I will get more done tomorrow.”

And then I wake up in the morning–although, can you call it “waking up” if you’ve been up half the night–and realize that no, today will not be the day I get things done.

Our little boy will be four weeks old in a few days, and I am barely starting to see glimmers of light.

I have been so utterly exhausted. I feel like this newborn stage is something people just don’t talk about. I mean you hear all the time that people with newborns don’t get sleep, but newborns sleep like 18 hours a day, so how could it really be possible that you wouldn’t ever sleep?

To be honest, I don’t really know. Baby E will sleep sometimes half an hour, sometimes 3 hours, but then decides he doesn’t want to sleep at night. The first week or two, I would be up til 3, 4, 5 in the morning. One night, I was up so long I got to see the sun rise.

And in between those cat naps he takes, I feed him. Breastfeeding has been so ridiculously hard, and it wasn’t until the third week that it started to get better. I can see why people would give it up–there were definitely times I eyed that formula.

Around week 3, we started getting some “good” nights. Meaning, he would sleep for 3-4 hour stretches at a time. I remember the first time I got a four-hour stretch of sleep, I seriously felt like a bear coming out of hibernation-it felt so good!! But then the next night, he would be up from 2-5:30.

I finally started talking to other moms, and they tell me that it is all normal. That eventually it will get better. And in a way, it has.

I started pumping a few days ago, and it has allowed me to have Eric give baby E one of the middle-of-the-night feedings. This means that for the past two nights, I have gotten the most sleep in the past month. He actually goes back to sleep after eating, which is like a miracle.

Two nights of sleep? This means that I finally had enough energy this morning to write a post. (In full disclosure, I am pumping while writing this because I’m all about multi-tasking these days).

Let’s see, what else? Oh the mom guilt. My kid is not even a month old–how can I possible feel mom guilt already? But the truth is, I feel guilty every moment I’m not with my baby. Right now, he won’t sleep unless we hold him to sleep, but all the baby sleep books tell me I should NOT be holding him to sleep. But I WANT to hold him to sleep–he’s so little. But does this mean that it will take longer for him to learn to sleep on his own?

I feel guilt during the nights when I pray for him to be older so I can sleep more. Then during the day, I remember to enjoy these snuggly moments because he won’t be this little forever.

I already feel guilt that I’ll have to leave him to go back to work in February. How will I do it? Yesterday, I sneaked out during a nap to go get a much needed pedicure, and I felt guilt that I wasn’t watching him sleep. I feel guilt that all throughout my pregnancy (and even before) I had said I wanted a girl, because now I realize how much I love our little boy and I know that I would be perfectly happy having a house full of boys.

Have You Ever Taken a CLOSE Look at Your Finances?

How to Invest for Extra Money in Your Spare Time

I realize this post is several months and old and I hope Baby is sleeping longer periods. But as a mom of older adults (23 and 17) and about to become a Grandma, I insist all you ladies stop with the Mom guilt. Time with the kids is precious, but so is your sanity and health. So make 2016 the year of NO MORE MOM GUILT!
People are full of well meaning and great advice. Take it, think about, and use whast works for you and your family, disregard the rest. When responding to all advice, – “That sounds like a great tip, I will see where I can apply for my family” works best. The person feels good, and no commitment or guilt!

For new moms, when people come visit, if you have a chore you really want to get done, ask them if they will hold, feed,play with or watch the kids and talk to you while you tackle it. Or ask for their help – Good Girlfriends will jump right in and help you by either that or helping with the chore. Ask them if they mind if you just sit here and fold clothes while you catch – they may help. I just sort out my husband’s and my undergarments.
If you have other moms near you, trade an hour a day – you watch theirs for an hour while they get something done, and they watch yours for an hour while you get something done.
Good Luck – remember – the days are long but the years are short!

It will get better. They don’t sleep through the night for a while, but you’ll learn to get by on coffee! My youngest is 7 months. Be kind to yourself and stop with the guilt! Everyone tells moms we must spend every second with our babies, but that’s good for NO ONE (including Dads who would like some bonding time, too; your mere presence makes for less effective bonding). Take a nap, take a walk; both help with the exhaustion. As does an IV drip of coffee!!

Yay! Congrats on having a newborn. When I became a dad, it seemed like everything should change like how I manage, budget, and spend money because my priority now changed dramatically. I had to save for my kid’s expenses and for his future. I’m glad that it happened and I realized this because right now, not only have I saved for his future, but also I have managed to meet my financial goals and my expected retirement aims.

Congrats! Enjoy! It definitely gets easier. It seemed life-changing to me when my little one smiled. It was like Yes! I’m doing what you’re wanting! We can communicate! You’re doing great, and if you feel like you aren’t, then you’re learning something. Keep on keepin’ on! I wasn’t sure how going back to work would be but I learned I was my best-self when working. I really value my time with the babe since I’m gone to work for the daytime.

First of all, huge congrats my friend!! he is beautiful!!! And I cannot even imagine what you are going through, you moms are my heroes!!!! xoxo

omg the exhaustion. OMG. My son will be 3 weeks on Friday, and we are in the EXACT same boat. Sleep is maybe a 3 hour chunk on a good night, and lots of day naps but he loves to sleep on us, and the first week I just sat in bed and held him and cried because he wouldn’t sleep anywhere but on us, and we just did’t know each other well enough to know what sort of rhythm would work with him. it was SO SO SO HARD. I thought I’d just sleep when the baby sleeps, but no one told me it would take 45 minutes to get the baby down, and then he would make the cutest noises that I couldn’t sleep through, and once you go to sleep yourself, the smallest noises wake you back up. And mustering the energy for the middle of the night feeds and diaper changes just wear you to the bone. So I’m right there with you. It’s SO HARD. But then you look at your little squish of a baby and are just flooded with love and find the energy to keep going. it’s kind of amazing.

He is seriously just the cutest! The mom guilt is real. I went to Target on my own the other day and felt huge guilt for leaving her. I know it is stupid and better for both of us if I take a break but man, GUILT. Hang in there mamma, you are doing awesome:)

What a cute picture! Congratulations!

From what I hear the exhaustion is normal and often times just when you think you got a schedule down the baby changes his mind again about something and so you just have to roll with it. I’m sure there are so many questions, but you will figure it out as you go along and don’t worry about doing it “wrong.” You can’t do it wrong. You are mama. That is the most adorable picture. He fits in a hat (helmet?)!! Oh my goodness. So precious!!! So special for dad to have that one too.

OH.MY.GOODNESS! Cutest pic ever (now I feel guilty I never did baby photos!)

You are doing JUST FINE! Your life has been turned upside down and it will feel that way for a while. He will get into a routine (with some bumps along the road). If he is fed and changed and loved he will be perfectly fine. I wish I could tell you that the guilt goes away, but you will feel guilty about the silliest things all the time. It comes with the territory. I swore I was having a boy, both times. My mother moved away two weeks before my first was born. She came to my house on Christmas day and was shocked that every single article of clothing and all the baby bedding was unopened and unwashed. That’s how convinced I was that I wasn’t REALLY having a girl!!! I thought I was going to have to return everything. My mom opened it all and washed it and put it away. My daughter’s coming home outfit was white even! I know it sounds cliche, but you really should rest when rests. It feels like there is always so much to do, but you have to remember you are still recovering from bringing a human into the world. You need to care for yourself so that you can be at your best. Dishes can wait (paper plates are even better). Bare minimum on laundry and when someone offers help point them to the chores you need help with :0) They are your friends and family…they love you and want to help so let them!
He really is precious, congratulations!