Budgeting the BulgeRamblingRecipesThe Mr. and Mrs.

A Mexican who can’t make enchiladas…

I don’t think I’ve mentioned it, but I am Mexican. As in, all my grandparents are Mexican, my dad was born in Mexico, and my mom was born here but raised in Mexico. And then that’s where the real Mexican bloodline ended, because by the time it got to me it pretty much evaporated. Prime example number one? I suck at cooking. (and everyone knows, Mexican wives are known for their cooking…and cleaning…it’s not a stereotype if it’s true!)

I can’t cook. Eric is the cook in our family. He can take all the ingredients in our fridge and whip up something off the top of his head. Me??? I need a recipe, and then I need some help, and measuring cups and bowls, and even then I might screw it up because it will be possible I forget to add a key ingredient…

This is why I am not allowed to use the “good” cutting board or the “good” knives. I am banned from my own kitchen. My grandma would be mortified.

So Eric had to work late again, and I decided to cross off my one-recipe-a-week from my To-Do list. Since I had all the ingredients, I decided to make a healthy version of Green Chile Enchiladas which I found here.

For all of you out there who are wannabe-cooks like me, let me give you some tips… 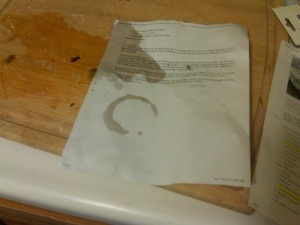 1) Keep your recipe OFF the cutting board, in a safe and dry place.

2) When you print the recipe, make sure the whole recipe is on the page! Nothing is worse than reading the instructions and realizing that the paragraphs are cut off, so when it says “Mix in (cut off) then let simmer for 25 minutes” you are left to guess which ingredients you are supposed to mix in…that’s just a bit of advice that may be helpful…

Soooo, I started cooking my enchiladas, making the filling and the sauce simultaneously. The recipe called for white beans, but I only had black beans. Improvise! I wasn’t going to buy white beans…just use what you got!

I then put the sauce on the bottom of the pan like so. I proceeded to make my first enchilada, and the tortilla broke! 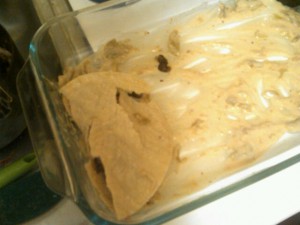 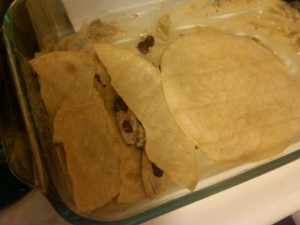 But then, the second tortilla broke again!!

So, I had two options. The first was to warm up the tortillas. I realized my tortillas were breaking because they had been in the fridge and were cold, they get soft when they’re heated. My mom actually soaks them in olive oil so they’re super yummy.

But there were two problems with this option, the first being that I couldn’t use oil, because then they wouldn’t be “healthy” and the second problem being…I’m lazy and I didn’t want to take extra time to warm up the tortillas. 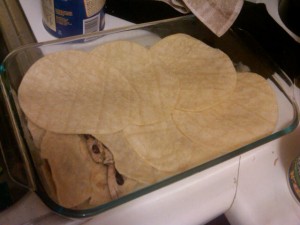 So I got creative. 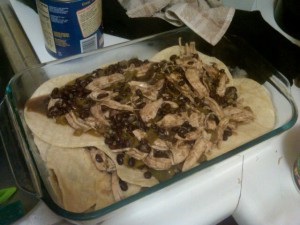 Put more tortillas on top, put the rest of the sauce on top, and added the cheese, and WAH-lah!!!

Two -minute enchiladas! (Only one-minute if you don’t have to shred your own cheese!) 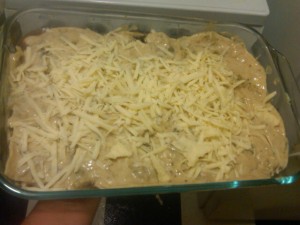 Well I guess it’s more like a casserole…but who cares right? Once you’re digging in, you can’t even remember whether it’s an enchilada or not…the point is…they taste like enchiladas okay???

So I stuck those babies in the oven for 20-30 minutes…but being the multi-tasker that I am, I gave our dog a bath during this time.

Am I not like the perfect housewife??? *Patting myself on the back right now* 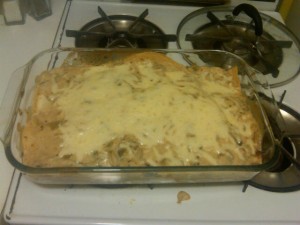 And exactly 30 minutes later, enchiladas were ready, healthy and SO GOOD.

I packed two tupperwares for the Mr. to take to work next week! I made a recipe and I packed my husband’s lunch–Killing two birds with one stone!

And the next morning, to reward me for my night of slaving away in the kitchen, Eric made me breakfast. 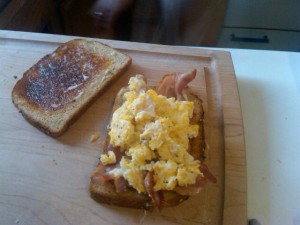 you may have an remarkable weblog below! would you want to make some invite posts on my blog?

Hello, this is a blogengine blog site right? Can you take a look why it seems i cannot get almost any comments approved on your web site? I really mean i am having a wonderful read here and I simply attempt to provide a little postive suggestions on your blogposts 🙂 I discovered a few helpful posts here by the way.. Keep up the excellent work!

I’ve always done something similar to what Bronwen suggests. I dip the tortilla in the sauce and then warm it up in a dry skillet (non stick works best so you don’t have to use oil).

This post is hilarious! I too am mexican, abuelos and parents born and rasied in mexico- Im the first generation born here. I’ve been married a little bit over a year now and i hear ya on the cooking thing.

If we, mexican girls, are notorious for 3 things. Babies. Cooking. Cleaning. I remember the first time i made rice i felt i could conquer the world… but then came the enchiladas and they tasted like my moms, but 4xs spicier.

You live and learn ey?

Part of being a good cook is improvising. It sounds like you made it work! xoxo

That is a riot – love the play by play and hey, I love a good casserole 😉 Same thing just all mashed together, right?! 🙂

sounds like you made mexican lasagna! way to improvise!

Bentley looks sad in that picture…way to cook though girl…

You’re too funny… I think they look and sounds so delicious! No one would have ever known about the broken tortillas had you not taken those pics… and great tip about the tortillas and olive oil!

Sounds delish! I’m pretty similar to you when it comes to my ability to cook… I can do it but the creative part befuddles me… if all else fails, throw it in a pan and call it a caserole!

Broken tortillas are the worst! I have a recipe (albeit with canned sauce) that has you warm a little bit of the sauce in the pan and dip the warm tortillas in that before rolling them. It helps a little… but you can kind of get burned fingers!