How I let the little things go 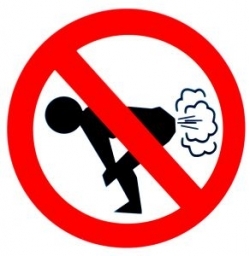 I firmly believe my husband could win the “Smelliest Fart” award. It is that bad.

Last week, we were driving home after a late party. I was driving and Eric was in the passenger seat. Out of nowhere, I see Eric roll down the window. It was freezing so I thought “why the heck was he putting the window down?”. Then I get a whiff of something bad, really bad.

“Did you fart?” I asked him, already knowing the answer.

“Yeah, that’s why I rolled down the window,” he replied.

At that moment–and it was a split-second–I had two options: I could get mad because he farted one of his horrendous stinkers, or I could be grateful because he rolled down the window for my benefit.

And it occurred to me–isn’t that how every little argument is? Isn’t there that split second where you think: I’m either going to get mad or I’m going to let it go.

The first three months of our marriage, I let everything go. I was beyond in love, and nothing could make me angry, not even his dirty crusty oatmeal dishes.

After three months though, I started getting mad about everything…dirty socks on the floor, dirty laundry outside of the hamper, chores that took forever to be done. I felt if I didn’t put an end to it now, it would continue forever. So we argued. I won battles, I lost battles–but we waged our wars.

Almost two years of marriage later, we’ve gotten to the point where the wars don’t have to be fought as often. I can’t remember the last time Eric and I had a full blown screaming match. Maybe he cleans up more and maybe I let a few things go.

There are some things my husband will never do:

But there are some things that he has learned:

So maybe that’s what arguments come down to–focusing more on the good things, and less on the bad things…picking your battles. Being grateful for the things that matter, and letting go the ones that don’t.

I was grateful. And I smiled the rest of the way home.

How do you talk about money with your husband?

Searching for a unicorn

That is hilarious!!! hahaha

This is quite adorable! =)

When my husband farts while we are about to change the baby’s diaper, I leave and let him change it himself. I figure that’s fair.

I have to say, I’m the nagging wife who would have made a big “stink” about it. I have a hard time letting things go… it’s always one of my New Year’s resolutions to ameliorate that, yet I always seem to fail.

We don’t battle as I loose easily. She’s tigress and I am a rat 🙁

Oh can he go up against Hardscape with his farts? Last night he was rank!
You are right, choose your battles. There is so much more to life….even if the car freakin stinks to high heavens.

It is always about picking the right battles. I usually assess the situation and decide if it really worth the fight. Most of the time, it is not. But of course sometimes I lose it no matter what. 🙂 I guess it depends on a day and how stressful my work was. But overall, most of the things are really can be decided and discussed peacefully. And even laughed about.

Learning to let things go is key, especially since for every thing he does that makes you mad, I’m SURE there are things that you do that drive him nuts, too. But it’s just not worth it to get in a huge fight over those things. In the grand scheme of things, they just don’t matter. And if we let them get to us, we’ll end up resenting our partners – I can’t think of anything worse in a relationship.

Hilarious story Erika. My wife and I have been married four years this summer (hard to believe, seems like yesterday we got married!). You’re spot on about learning to let the little things go. If you don’t, they’ll begin to fester and turn other non-issues into issues. Not worth it!

Thanks for the reminder 🙂

I seriously think of all your posts, this is my fave! We got married (almost) 10 months ago and we had been together for 3 1/2 years first. I never thought as newlyweds, we’d argue b/c we knew each other. SO NOT TRUE. Everything became a battle months 3 to 8 1/2 in. But like you said with you and Eric, it became a “who won it” deal…that’s sort of what happened. My husband still drives me mad at times. I drive him nuts but something shifted somewhere and we have learned to pick and choose our fights as well 🙂

This is so true! We’re absolutely learning this now, in our 9th month of marriage. It seems to be a woman thing too… Letting the little stuff get to us.

Oh my, this is hilarious! I remember the first time husband dearest farted in front of me…we were out driving, and I’d only just got back from living in America for 6 months. I was looking lovingly at him, when all of a sudden he lifted his leg up and let one rip…then turned to look at me in horror as he realized I was in the car!!! Haha, that’s what you get for leaving your man alone too long 🙂

The rest of what you said is so true though…you can’t win ’em all!

This post absolutely made my day! Too funny. My husband’s aren’t too smelly, but every once in awhile he sneaks one out that makes me head for another part of the house. Thanks for posting!

I used to hate the farts, now I look at them as a blessing. Sounds weird I know, but it reminds me that he is so comfortable with me that he doesn’t have to sit awkwardly and hold it in like on a first date. There are a lot of little habits that have popped up with comfort and I much rather would have the habits than be uncomfortable together.

OMG! I am the same way with the BF. It depends on my mood as well though. If I am PMSing then he better watch out! I learned to let the little things go but sometimes I have to stand up for what I firmly believe in, even if it’s a silly little argument. I think that’s my Scorpio stubborn side, and it could also be my pitfall at times. I need to learn to be more giving and thoughtful when it comes to these little arguments.

nope, i’m pretty sure that my hubby has the smelliest farts ever. disgusting. he rolls the window down too … but they smell so bad so i still freak. i guess, i have to count my blessings, haha.

This is hysterical. I will tell you why I don’t fart around people anymore. I used to date a girl who had a 2 year old son. I would grab his head and fart on top of it. I would laugh and he would laugh. The world was great. Then one day his cousin came over the house and during play time she started to cry. The little boy stood up walked over to her and sat on her head. You can figure out what happened next.

Oh yeah… the smelly farts in a windows rolled up car…. Torture. Lol!

It is important to pick your battles, and I try to put it in perspective…. I will miss all those things that drove me crazy…. so I try not to let it bug me so much.
Life is to short.

Wow, that is such a good point!! You are teaching me so much about choosing your battles and when to choose it and when it’s just not worth it. You are so smart my friend!

We were definitely like this also. Thankfully now it’s been long enough where we don’t have too many of the little fights anymore (and thank god my BF has started to roll down the window when he farts, but sometimes he locks the windows and makes me suffer).

Indeed; pick your battles. I think MyHonestAnswer hit the nail in the head. It’s a struggle between not letting it happen now because it won’t stop the behavior and not making a big fuss about it. Compromise, I guess. I am sure he has a few complains about the way you do things, so it is a give and take.

I used to get mad at everything the boy did that wasn’t “right” after we got used to each other. I couldn’t stand his habit of not replacing the towel in the bathroom after he’d had a shower, leaving empty cereal boxes in the cupboards… ugh

Now that we’ve been together for almost 5 years I found I have relaxed a lot. I still mention it when he does things like that, but nicely.

It is definitely important to pick the battles that we fight.

So important to pick your battles, isn’t it? I used to get annoyed about the socks everywhere. Then one day I thought, ‘there’ll come a time when there won’t be any socks on the floor – and that’s when I’ll really feel bad’.

And I remember I’m not perfect either… I’m sure I plenty of things that seem so silly and annoying, but they must make sense to me!