SO there you have it. Just a lot of balls up in the air. I am tired of this juggling game. 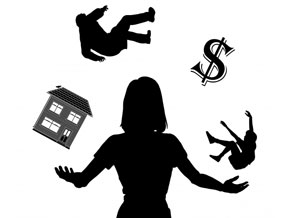 If you died today, would it be okay?

Becoming friends with your ex’s wife

Never Pay for a Wedding Ring on Credit...

4 Things to Know About Commercial Appraisals

Tips for Dealing with Wedding Debt

THE BENEFITS OF PAYING WITH BITCOIN

Getting Back With Your Ex Husband After a...

Denny’s Coupons: How to Save Money When Planning...

Praying for you and Eric and that everything works out for you both!

Love the bullet points! Good luck to you guys with the interviews…hopefully you can sneak in a honeymoon before he lands one of the jobs! If you get a sec, I’d love to hear your thoughts on my latest posts and enter to win my giveaway!

Don’t rush it on the honeymoon – we went on ours for our five year anniversary! Better late and ensure it’s EXACTLY what you want than to compromise by putting something together at the last minute.

I like bullet point posts. Figuring Money Out does them a lot and she’s one of my favorite blogs!

It’s true that it can be so difficult trying to juggle everything we need to financially. I think it’s very inspirational the way you’ve been able to make money on the side! I hope you get to take that honeymoon soon.

– It sounds like there is a lot going on, but you also have a great head on your shoulders and you’ll get through it all soon. I hate it when there is just a month or so when you just don’t even feel like you can breath. But then you’ll get out of it and look back and say, “Whew! We made it!”
– I can’t wait to hear about Eric’s job. Sounds like a great opportunity!
– I totally know what you mean about praying at church. I pray better in a quiet place, and a church is a great place to find that. It will work out 🙂
– Breath! You guys got this!

Good luck with everything!

Re: Prayers – my personal opinion is that the best place to prayer is anywhere. God is everywhere, not just in a structure that was built by a man who says it’s God’s house. I think if anything, being outside is probably being closest to God because that is what he himself created. Just my thoughts on the subject. I have friends who feel the same way you do.

I really want to do a half marathon! I currently am going through the Couch to 10K program and i am loving it! if only it wasn’t 100 degrees outside when I ran. Stupid heat! I know that I am looking for a run to compete in, for fun of course. Good luck!

Awesome on the half!! And Eric AND friends? That will be great for you! I’ll cheer you on virtually from Chicago where I will be cheering my sis on for her marathon!! I will say a prayer for Eric and the job sitch too. I have a good feeling about this 🙂 I love bullet point updates!! (and hope you get your wish for a trip!!!)

Another half? That’s awesome! I’m easing back into running, I’ve been off since my race at the end of May. I want to build up a really great base to attempt a half next May. Good luck I hope you get a new PR!

That’s great to hear you signed up for another half! Yay that the credit card is almost paid off and you’ve got some extra side hustle money coming in, I can’t wait to hear updates on your bullet points.

Hang in there girl! I follow you, no matter how you post. You keep me on target with your positivity and creativeness, and I think you are doing a fab job of it! Times get rough but before you know it, that credit card will be paid off 🙂 good luck to you guys re: interviews!

I wish I was as devoted to running as you are! My husband and I are doing Power 90 together instead due to my lack of gym buddies in the area (I’m in Dana Point). 🙁

Crossing my fingers that the interviews go well.

For the record I love bullet posts! I’ve written two in the last two weeks! It’s such an easy way to catch up on things.

Good luck with half training. It will be fun to do with your hubby. I am crossing my fingers that things shake out well with his job situation. You sound like you are juggling like crazy, but once one or two things fall into place, it will feel like it is all coming together.*

Have fun with the training for the half – but be careful because it can turn into an addiction. =). I started with a half, did a few more and now have a few full marathons under my belt, too! Running is a great way for me to clear my head in the morning and prepare for the day. Hopefully that helps with figuring out which ball to catch next as you juggle the rest of your responsibilities.

Hey Erika! I just did a post today about this same sort of feeling which I call the quarter life crisis – just feeling like you have a lot of crap going on and lots of things pulling you in different directions, wanting to do better and go to more school but worrying about money. I think it sounds like you are doing great, even with lots of decisions to make, and I wish Eric the best of luck in his interviews. I know he wants that firefighter job so much!
xo
Cat

Buying Your First Home: What You Need...

Can you be too safe with money?...