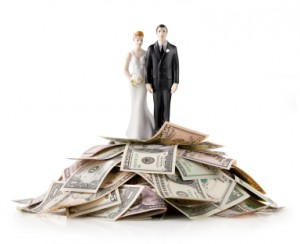 Two weeks ago, we received Eric’s first paycheck with full-time hours on it. This check was more than twice as much as he was making while working part-time hours these past few months and the highest paycheck he’s made since we’ve been married.

I cannot begin to express how much relief this brought us—or rather, how much relief it’s brought me. For the past few months, I had slowly started to get bitter and I was taking it out on Eric. Granted, money has always been a sore subject for us. We oscillate between “Yay, we’re budgeting together!” to “Oh em gee, we have no money, stop spending now! What do you mean you spent $3 at Starbucks again?!” And this happens pretty frequently…

It’s not that I’m proud of my temperamental attitude, but really, there’s only so much a girl can take, right? For the past two and half years of marriage, the financial burden has largely been placed on my shoulders. Eric not working for four months so he can go to the fire academy?  Financial burden on me. Eric injuring his back and not working for four weeks? Financial burden on me. Eric working part-time hours? I have to pick up the slack to make up for the lack of money. The straw that finally broke the camel’s back was Eric going back to school to finish his degree.

While it was something we both wanted him to do, I knew that once again, I was going to have to figure out where the money would come from to pay for his schooling. It seemed that the more money I made, the more money Eric got to spend.

So when we finally got a full-time paycheck from Eric, it was like we were catching one huge break.  Finally, I have some extra wiggle room to play with. Finally, I can designate money into savings again—and keep it there! Finally—I can start saving up for vacations again, instead of covering the bills with the side hustle. Finally—I don’t have to freak out over a $3 Starbucks purchase. Finally, finally, finally.

We are still 100% Newlyweds on a Budget (well,  okay maybe not newlyweds anymore…) …but I’m no longer freaking out over small purchases or saying things like “We can’t spend any more money for 11 days!”

Now, I ain’t saying I’m a gold digger, I just don’t appreciate feeling poor all the time. We both work very, very hard. I know that Eric is still working on his career and one day (soon, we hope!) we will laugh at all the things we had to do to save money. But for now, these new full-time paychecks are helping us get through. It’s like Mile 12 of a half-marathon…we’re almost there.

Is it okay to have three children?

What Should You Do If All Your Husband...

Haha! Love the post title! I understand, when my husband changed jobs after our daughter was born, his income was cut in HALF. That is a huge number and on top of that, our expenses went up 20% due to child costs. Ugh. I just wanted to say, “go back to your old position, even though I know it exhausted you.” haha! It’s mean, but it’s tough when the money stops flowing so freely. It does sort of make me feel like a gold digger to want him to work a sucky position for more money, so I left it alone. And, I’m not resentful….now.

Pretty sure that does NOT make you a gold digger! 🙂

I may have commented on a post like this before, but…I have no idea how much money I even make. (Isn’t that the saddest thing you ever heard??) I mean, I know what’s in my teaching contract. But my husband takes care of it all. I don’t know how much money we have. His spreadsheet system for paying off debt, saving, and putting away for retirement is more complicated than the plans for sending a rocket into space. He has a system and I’ve proven in the past that I’m not good with “the system”. Our financial burden is placed on him mostly, so it’s been this way since we were engaged, as I didn’t work for our first year of marriage.
I’m totally realizing how ditzy this makes me sound. Hmm..

Kristin, I know a lot of women who are like that, so you’re not alone. But you really should take a more active role in your finances – you can let your husband be in charge of it, but it’s important that you know how much is coming in, where it’s going, and why. What if something happened to him? You should know the basics just in case of emergency – nobody likes to think it could happen to them, but better safe than sorry.

Glad to hear you all are finally able to breathe a little!! Giggling…at the gold digger. Now I can’t get the sound out of my head! 🙂

Glad you finally caught a break! In my first relationship I was the breadwinner and it was stressful. Especially when your SO thought it was cool to rack up credit card debt to improve his credit score. You do get resentful. Now, it’s the other way around. I def am a good contributor to our household bills but he makes more and will continue to earn more whereas I am stagnant. I felt so bad at first but I’m learning to get over it a little. I don’t want him to resent me. Hopefully, this is the first in a long road where your sacrifice pays off and it’s all worth it.

Ugh I feel your pain! My fiancée left his job about a year ago (which didn’t pay all that much) to start his own business. His income has been minuscule and sporadic ever since. For the most part, I don’t mind it, but it gets very stressful to worry so much about money when the income is so lopsided, and it makes me feel responsible for the prosperity of our household. Luckily we can talk about it and he’s not resentful that I feel that way at all, it just inspires him to work harder to keep his end of the boat afloat. Like you though, I long for the day when we have just a little bit of wiggle room, just a bit.

My name is Steven Robert. I am a financial writer and I want to contribute a guest post for your blog : https://www.newlywedsonabudget.com on finance topic. I have contributed many articles for numerous financial websites. My article will be more than 500 words, informative, unique and it will only publish on your blog.

I will send my article as an attachment .txt file or in the word format.

Hope you would like my proposal and will give me an opportunity.

May I send my Article?

I get where you’re coming from, but you’re a team, right? Everything he was doing was trying to make it better for both of you in the long run. Well, except for getting injured – that was just selfish… jk! =)

Mr. PoP made waaay less than I did when we first got married – we actually wrote about it on our blog today – but when that was going on, I still felt like we were splitting responsibilities. My job was taking care of more in the short term, and his was (hopefully) a good long-term opportunity. It didn’t work out that way, but we still felt like we were working together.

I agree with everyone above, I don’t think it’s bad to feel that way and I’m so glad to read that other newlyweds are having similar issues to my husband and I! We’re coming up on our 1 year anniversary and money wise it’s been a crazy year. We moved across the country so that I can start grad school (while still working full time) but it took my husband way longer to find a job than we thought and we blew through all of our savings really fast. It’s a long story but I’ll say I felt many of the things you’ve talked about and then some 🙂

I don’t think you should feel bad about that. Although it seems like most of that stuff was out of your husband’s control, it can get quite frustrating when you are the sole income earner. Glad its working out for you.

Yay! I love this! I am so glad you are making your way forward, as always, again. You two work so so hard! congrats!

I hope we have that feeling soon! My sweetie keeps on interviewing…

Oh my goodness, another “Eric and Eric/ka” couple! If you’re like me you could probably be out of debt by now if you had a dime for every time someone commented on that haha

Glad I stumbled upon your blog, my husband and I also had close to $40K in debt when we got married and have cut that number in half about a year and a half later. I love reading about others in similar situations.

You guys are doing a great job; hooray for your husband’s full-time check!!

I can definitely relate! I feel like the roles have turned. The financial burden was mostly on my husband when I first got laid off. Then when we both got laid off, it was sort of on me to make sure the side hustle got us from bill to bill. Now that I’m back at work, the financial burden is on me even more to make up where hubby might be short, and to try to figure out how we’re going to make everything work out financially. Here’s to hoping hubby gets a job soon!

I know exactly how you feel! Now that the boy has a new job, we’re making so much more money. He’s making more than he ever has before.

How will moving affect our budget?

For love or money