We paid off ONE Student Loan!

With only three months left in 2012, I needed to get cracking on our 2012 goals for the year. Here are the ones we have left to finish: 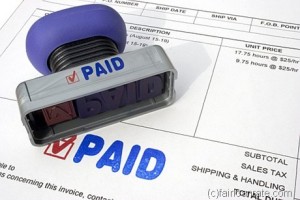 I would say the other non-tangible ones, such as Continue Growing the Blog, Eat Healthy Lose Weight Start Running Again, and Be Nicer to the Husband have all been fulfilled but I guess I’ll have to do recaps on those later.

For now, I wanted to share the absolute wonderful news that I have finally paid off ONE of my student loans! Only six more to go!

As of today, I have $20,015 left to pay off. When I graduated college, I had approximately $32,500 in student loans, which means I’ve paid $12,485 over the past six years–NOT including interest. I really don’t want to calculate the interest because it just makes me feel bad.

While I feel we made significant strides in 2011 to pay off debt, the debt payoff hasn’t been as great in 2012 for a number of reasons:

Sometimes life gets in the way, and you can’t live according to “The Plan.” Looking at the bigger picture, can I just say this means we’ve paid off 50% of our debt in the two and a half years we’ve been married?!

What an accomplishment! I updated our debt numbers to reflect the debt we really had when we first got married (which was more like $43,000, but I went ahead and low-balled at $40,000), and I am absolutely astounded and so proud of ourselves for how far we’ve come.

This upcoming year, we will again see challenges in debt payoff as we work to pay off our new accumulating school costs. The decision for both of us to go back to school was not easy, because really who wants to acquire more debt?

But I know in the long run, it will be worth it from the bump in pay I know I will receive, in addition to Eric finally landing his firefighter job.

Is it okay to have three children?

How Hiring A Cleaning Lady Helped Our Marriage

[…] We Paid Off One Student Loan by Newlyweds on a Budget […]

Congratulations!! It feels so good to get rid of student loans and I know first-hand how hard it is.

We’re using the extra money my husband is getting paid during deployment to pay off student loans. I found one of those “side hustle” jobs a month ago and we used that to pay off one of my loans.
So by the end of this year, we’re hoping to have very little debt left. Is a deployment worth it to be out of debt? Not at all. It’s strangely annoying to have the ONLY thing I’m not worried about be money.

Congrats!! And I know, this year is my 10 year high school reunion too and I cannot believe it.

[…] The Newlyweds on a Budget paid off one student loan! […]

I recently paid off the first of my 4 undergrad student loans this past year as well!! It’s a tremendous accomplishment and one that should be celebrated!

I’m going to my 10-year HS reunion this fall and expecting my first child in February – I’ve never felt older!!

Congratulations to you both for getting for knocking one debt to the ground. It’s the best feeling in the world to save money but it’s also the best feeling to pay off debts. Keep up the hard work. Cheers Mr.CBB

YAY! I’m so jealous! That is such a big accomplishment. Nothing like seeing that 0 balance.

Congrats! I bet it feels great!

Woo woo congrats! We just transferred the final amount to our savings and checked off our goal of saving for a new(ish) car we’ll need next year. Onto house down payment savings!

Yay, that’s awesome!! We’re getting ready to pay off two credit cards in the next few months, which is going to feel great!!

Congrats! I love inspirations posts like this 🙂 And life happens and gets in the way of our goals-I’m pretty much not on track to hit most of my yearly goals or my September goals. I’m okay with this though because I’m still trying to succeed and I know that counts.

That’s so great! You’re right about life not always going according to plan, but that’s great that you’ve paid off so much in so little time!

FANTASTIC job on paying down so much debt!

I’m really looking forward to reading your post about going back to school. That’s been weighing heavily on my mind too.

Calculating the interest can make you feel good! Think of it as how much you WON’T have to pay going forward!

Congratulations! I can’t wait to feel that sense of completion myself!

This week we downsized to one car. We didn’t really need two cars, we just liked having them. The sale ended up being really smart. We got $2,500 more than what we owed. The check went right into savings, and we no longer have a $300 payment every month..*

Congrats! That is awesome!

What a great accomplishment, congratulations! Great inspiration for me as I work to update our budget and get back on financial track!