The Spark: That ‘Moment’ You Know 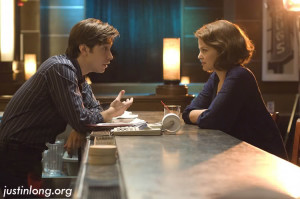 A longtime blogging buddy recently asked about whether she should keep dating a guy after three dates, because she wasn’t sure if she really liked him or not.

I encouraged her not to rush to a decision and to keep dating him until she could really figure it out.

That got me thinking if we really put too much pressure nowadays on “The Spark.”

“Guys invented the ‘spark’ so that they could not call, and treat you kind of bad, and keep you guessing, and they convince you that that anxiety and that fear that they’re throwing at you is actually, just a ‘spark.’ And you guys all buy it. You eat it up. And you love it. You love it because you feed off that drama. You all love that drama.”

– Alex
He’s Just Not That Into You

Eric and I first met in a coffee shop after exchanging emails for a few weeks (read about how we ‘technically’ met online). We had a nice conversation and that was that. We ended up hanging out a few more times, strictly as friends, but I never saw him as anything more.

It wasn’t until over a month later that I invited him over to my place to play some board games with another friend of mine. When he showed up, he had brought a cup of hot cocoa from the coffee shop where we first met.

And that was my moment–that was when “the spark” happened and I started seeing Eric not just as a friend, but as maybe something more.

We ended up going on our first real date about a week or so later, and it was a couple of weeks after that, that I told my mom I knew I was going to marry him (And I did, just two months later).

To this day, I still get butterflies in my stomach whenever Eric shows up unexpectedly at my workplace with my favorite cup of coffee (which he’s done more than once). You’ve never seen me smile so big.

It took me more than a month to see Eric as more than just a friend. So I am personally in favor of becoming friends with someone first before deciding whether there is really any sort of romantic connection.

And isn’t that what dating is all about? Figuring out if someone is really compatible with you? Perhaps that’s not possible to discern after only a few dates.

I’m all for giving the guy a chance. And I’m all for women not putting so much emphasis on “The Spark.”

What are your thoughts? Did you have a spark when you met your significant other?

Save Time and Money with Multi-Purpose Furniture

Wow – that was a quick engagement 🙂 It’s funny how the human brain works. You can think of someone in a particular way (just as friends) and one special event can be like flipping a switch with how you view them. It’s cool that he can still make you feel this way even today 🙂

It took me several months to figure out how I felt about the man who is now my boyfriend. We started dating in December, it wasn’t till August that he told me he loved me and asked me to be his girlfriend. I’m glad we both stuck around and waited to see how we felt (we had both come out of very long term relationships).

I wouldn’t say it was a “spark” when we first met face-to-face (technically met online first about a week prior) – but there definitely was a “something”.
Pardon the cliche, but this guy just seemed too good to be true. Everything he said and did was just too spot on that I seriously felt like it was a prank or that he was playing me.
But, it didn’t take me long to realize that no, this was just what a real relationship feels like. This is falling in love.
And how amazing is that? 🙂

I agree that the spark isn’t always instant but there should definitely be some kind of interest, right? It’s so hard to know these days. I feel like you just know when you know.

It was totally love at first sight for my husband and I. We met after I gave up on dating and decided to be single for a little bit. The universe had other ideas. We were engaged after three months and married eight months after that.

I definitely had an instant attraction to my husband, but it took me about 3 months to feel confident in knowing that I loved him and saw a future with him. Those things take time, there’s no point in rushing it.

THIS. YES. Also I love your whirlwind story. I have read it before but I AM A SUCKER and needed to see it again. 🙂

I met my future fiance online before we re-connected. He was very nice, sweet and genuine on the few dates we had. However, I had just moved to Hawaii and was dead set on making it as a natural foods chef. Because of this, I kind of treated dating like a hobby and just met new people to figure out the things I did and didn’t want from a relationship.

Throughout that year, he contacted me a few times only for me to blow him off for some other fling I was having.

Literally, the day I gave up dating was when he contacted me probably for the last time. I decided to hang out with him as friends. When we met again there was this inexplicable magic between us.

At that point we had both grown a lot and we’re both truly ready and so the universe put us back together.

The drama game is ridiculous. I appreciate honesty and getting straight to the point. As you get older you have less time to waste (or care) about playing games.

We met in college, but definitely sparks and butterflies in the beginning. He wasn’t my type at all, but something about him tickled me with delight. I think the problem is that many women are waiting for this spark and ruling out perfectly good guys because they don’t feel fluttery every time they see a guy. I think sparks and butterflies can definitely ignite over time and also that initial sparks don’t mean anything. It’s getting through the hard times that really makes a relationship work.

No spark, no moment. I think our relationship (for me at least) was the definition of a slow burn. Friendship to casual dating (which I thought would just be a summer romance) to … more, I guess.

I don’t know if I believe in the spark! I’m sure it exists for some people though.

I love reading about when you felt a spark for Eric! so cute! I felt it with M pretty darn quickly but agree that it doesn’t always happen right off the bat. sometimes it takes some time! it’s different for everyone 🙂

There was nothing instant for us. For me it took us being apart (while still “just friends”) to realize how much I missed him.

I thought Steve was really cute when I first saw him but we just hung out casually for awhile. He asked me to “go steady” or whatever after a month and I made him wait a few weeks for my answer just because I wasn’t sure how he felt about serious relationships. After I said yes, we fell quickly and deeply in love. Wow, I can’t imagine my life if I wouldn’t have given it a chance. We celebrated 4 years of marriage a couple of weeks ago 🙂

It’s kind of awkward when you met up to date and then you don’t like them. I’ve been through that moment where you don’t want to answer the phone but you don’t necessarily want to be their friend either. I wasn’t sold until after our 3rd date. After that it hit me like a ton of bricks and I’ve been hooked ever since. I agree that your friend should give it a little bit more time. I think she will surely get to a point where she either knows or not but if she isn’t sure then who knows…that next date might do it. That’s how it was for me.

I think thats the hard part of online dating. It’s hard to do that kind of friend thing and see if there is a spark. I wouldn’t judge it on one day per say, but maybe 3 for sure. But I know what you mean though because everyone I was ever in a long term relationship with started off as my friend or co-worker.

My husband was persistent and blunt while I kept telling him we’re just friends. It took a few months for me to finally accept that we’re more than just friends. Now he’s my husband. You never know how things will work out. But I don’t like playing games, so for him to be up front and honest was a good thing with me.

Dan and I had instant spark when we talked on the phone for the first time. We met two days later because neither of us could wait any longer. I ended up spending the whole night with him and practically moved into his apartment the next week.

Despite this, I agree with you. I think we focus a lot on what we think we’re supposed to feel, rather than just feeling and having fun. It might happen for them…it might not. Either way, it’s okay. There’s no need to put pressure on “figuring it out.” As long as he’s not a huge jerk, it’s okay to keep spending time together. Life has a way of unfolding itself…that’s just the nature of life.

My husband was (is) my best friends. We were great friends for years and I never consideredus more. One day when he in fact liked me more than friends I thought “this should be weird” but is wasn’t. The rest is history, together 11 years, married 4. Our friendship is what keeps us together during thw really hard time. I respect the friendship we have too much to ever screw it up. He makes me laugh every day.

When I first met my husband, it was in a group of mutual friends. We all hung out a bunch of times in this group, and he kept showing up but I didn’t think of his as anything more than a new friend. I had just started graduate school and was focused on that. It didn’t even occur to me that he was interested in me. He seemed too goofy (he is goofy)! He finally asked me on a date and I said yes because why not, but I was convinced it wasn’t going to be anything serious. Five years later, we’re married!

When you least expect it, right??

I didn’t know if my-now-hubbie was asking me on a date or if the mutual friends we knew would be there too. He said he got “some tickets” to a local event. It turned out to be a date, luckily! I had always stressed about what to say or when to respond or whatever. I decided I was never very good at the game so I’d say what I wanted when I wanted. Worked out well for me!