Should You Lend Money to Friends? 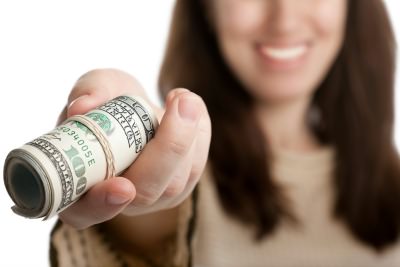 I’m sure at one point or another, you’ve decided to lend money to friends.

Whether it’s $5 for lunch or a few hundred to help with a move or maybe even more if it’s family.

I feel lucky that I’ve never been in the position where I need to ask to borrow serious money from friends–because I have access to the Bank of Mom & Dad.

While I have borrowed money from my parents maybe twice in the past several years, it was only because money from our online savings accounts takes a few days to transfer. And as soon as we received the money in our checking account, I would pay it back.

Some people, however, don’t have access to financially secure parents or their parents simply aren’t willing to let them borrow money.

I don’t like being in a position of having to borrow money. There are several cases though where I won’t have cash on hand, and will borrow $20 from a friend. I always make a mental note of it, maybe even put a reminder in my phone, and make it a point to pay them back the very next day.

I never want to be in the position where someone has to remind me “hey, remember those $20 you borrowed…?” because ugh, that puts the responsibility on the lender to nag you, and that’s just tacky.

Plus, I think it’s a huge display of character as to how quickly you pay a person back.

Enter the case where we become the nagging lenders.

The friend said he needed the money to pay for a deposit on a new place that he’s moving into but he can pay us back on his next payday in two weeks, he said.

Eric called me and wanted to make sure it was okay with me first because it is our money.

I wanted to say no.

Eric is still owed about $150 from co-workers from February for a fire academy purchase and he has not yet received that back. I should have gone with my gut and told Eric that he is only allowed to have loans out for $150 at a time.

However, I don’t want to be that wife. The one always saying no.

So instead, I decided that I would make this a valuable lesson. And I said yes.

You see, Eric only occasionally talks to this friend, and I haven’t really seen the guy since we were first married four years ago. But he was the one friend that helped us move when we first got married, so I figured if anything, I could count this money loan as payment for helping us move.

Because the first–and really only–rule you need to follow when you lend money to friends is that you should never loan more than you’re willing to part with.

In other words, don’t expect to ever get the money back.

If they pay you back, that’s great. But if they don’t, well you weren’t expecting it anyway.

Well, the Friday when he was supposed to pay us back came and went and we didn’t hear anything. Then another Friday passed. So Eric texted him and the friend said he would pay us back the following Friday.

So that Friday came and went and we didn’t hear anything.

So Eric called him, and the friend never returned his call…

And all this time, I’m nudging Eric…”hey, when is he going to pay us back…”

Radio silence from this “friend.”

When Eric would talk about it, he was really upset that his friend would do this to him. Eric has a real soft spot for his friends, and he would always go above and beyond to do anything he could to help them.

But while it was an expensive lesson, I don’t think Eric will ever let friends borrow money again.

My bottom line is never to mix friends and money.

Do you let friends borrow money? Do they pay you back?

Balls of Steel: A Review, Discount & Giveaway on Whiskey Chillers with a Cause

Why FHA Loans are Bad for First Time Homebuyers

[…] always quick to write about Eric’s money mistakes (he has a penchant for lending money to friends who never pay him back), so when I recently found myself in a money fiasco that was going to cost […]

[…] Should You Lend Money To Friends? by Newlyweds On A Budget […]

Oh I just had to comment on this! A few weeks ago I found out my husband had taken out a loan at our bank for a distant “friend” that he rarely sees, for 5k. 5k!!!!!!!! He didn’t even tell me about it. He didn’t think it was a big deal and that it was his decision. I was livid. All because his friend has a problem with betting.. Hello!?!?! red flags!!?!?!

Nope, I agree with you. It sucks that Eric had to learn this lesson the hard way, though. It is really disappointing to know you can’t count on people, especially when it comes to money. Ugh.

I hate lending things to friends because 95% of the time, I don’t get what I lent them back. Not getting it back drives me crazy. I went out to breakfast with a friend and she didn’t have cash, so I bought it for her and she said she would give it back. She hasn’t yet. Granted it was $5, but already being on a tight budget, I don’t have the availability to lend her $5 and not get it back.

I also hate asking for money and don’t do it unless I absolutely have to. My boyfriends mom is giving us money for the deposit on our apartment, even though we have enough for it, but she’s trying to be nice and get him out of her house.

I agree with the philosophy of not lending it if you’re not okay with it being a gift. BUT, I would also message/email the friend and ask what’s up. Maybe offer that if he can’t pay you back all at once, can he do half now, half later? That really sucks though! It’s one thing to forget you owe someone $20 (still annoying) but another to knowingly flake on a large amount (I see $200 as a large amount!).
So are you going to let it go or keep asking the guy?

I have done it once for a friend and it worked out but would rather not again.

Have done it once for T’s friend and it worked out but would rather not again.

Have a small loan, like $60, out to T’s brother (which he didn’t tell me about until after). His family would always be borrowing money if they could so I’ve told him if he wants to lend them money it must be done from his account, I want nothing to do with it.

I personally hate borrowing or letting anyone borrow money. That being said, there are a few people I would absolutely lend money to without hesitation because they have shown me a history of being reliable and trustworthy. I would not even care if that money was ever returned. I think you should not lend money unless you know you can lose it. Otherwise, it will drive you nuts.

Is that actually you in the picture with the wad of $100 bills? It looks just like you. If it is, can I borrow a few of those bills? Haha!

I agree with you 100%. Never part with money you don’t need back. Poor Eric. He is such a softy!

I remember you mentioning this before and wondering if you should step in or not….guess you didn’t and guess the guy never paid the money back. That is so sad. I don’t know if I mentioned it but something similar happened when I was with my ex. I ended up taking the guy to small claims court!!! He borrowed from me to give him the money (which is stupid ’cause that clearly means he didn’t have the money in the first place to be loaning) and when he didn’t get it back he paid me back as agreed. We had already separated by the time I filed but it just pissed me off that someone would do something like that and just expect to totally get away with it. Long story short he did. Yes, he had the hassle of facing me in mediation and I won but never saw a dime of the money.

I think this is why I’m happy my blog is public. Most of my friends know about it and probably think I don’t have any money to give them anyway. lol! Aside from $5 here and there is a friend was short on cash and let’s say didn’t want to use a cc (and I’m ok parting ways with that because usually they make up for it somehow), I never have been in that position. But if I was not OK with it, I would probably say “I’d love to but my own money is really tight this month.” What kind of friend would take money from another friend who is in a financially tight position? It’s very sweet though Eric is very generous like that though!

yes it is nice of him, but not when he is taken advantage of

i say no…i lent money to a friend because she was in a desperate position and i had the ability to help…fast forward six months and she started dating my ex boyfriend a week after i broke up with him. we are no longer friends and i’m out the $200 she still lent me. if in the future i was in the position of considering loaning a friend money, i would draw up a contract and have a clear repayment plan in place.

Wow, what a bad friend. And doesn’t it almost make you feel bad about yourself that you were such a bad judge of character? I felt like that

That really stinks. I’ve never lended a large amount of money to friends because I wouldn’t want money to be the thing that comes in between us.

Agreed–which is why I don’t lend money to friends. But Eric is different and I think he knows better now

Agree 100% with this post. Lending money can be a slippery slope, especially to friends and family. I don’t mind picking up lunch or supper every once in awhile, but don’t ask me for my hard earned dough!

Other than the occasional coffee or lunch, I have never loaned money to a friend (or asked to borrow money from a friend either).

That said, about 5 years ago when we were trying to reorganize our debt, we were trying to secure a loan for about $7000 (it was a robbing Peter to Pay Paul, but it would have helped in other ways…long story). Anyway, our Loan to Income ratio was too high, and we were turned down. My BFF offered to loan us the money (and they CERTAINLY weren’t in a place to be able to do it), because she trusted me that I would have paid her back in a few months when other funding would have come through.

I told her how touched I was that she would even OFFER, but my friendship with her meant more to me than $7000 and I didn’t want it to become a “thing” between us. So I declined the offer, and told her I loved her. 🙂

see now THAT is high-class and very admirable!