7 Things You Should Know About Marriage and Debt 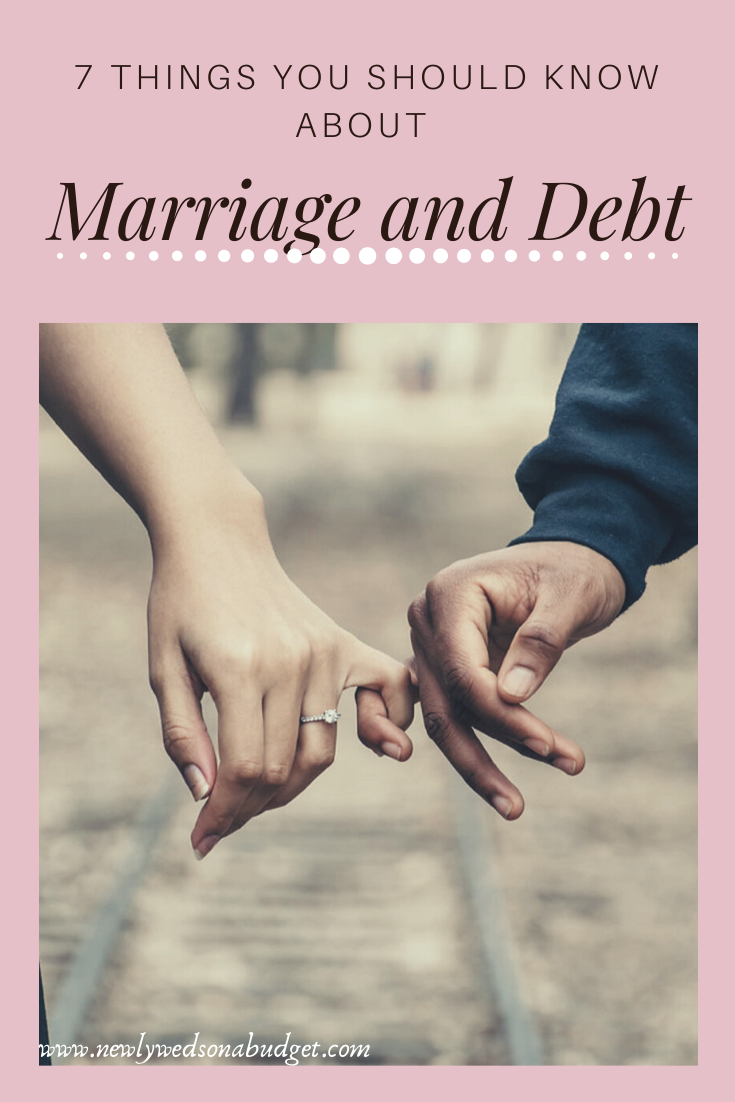 When you get married, the debt equation changes in some ways but not in others. While you are bringing your financial lives together, that doesn’t mean you always share responsibility when it comes to debts. However, sometimes you do, even if the debt isn’t in both of your names. If you are wondering how marriage impacts debt, here’s what you need to know.

Overall, seven in ten American adults bring debt with them into a marriage. Most commonly, this is credit card or student loan debt. However, it could also include auto loans, mortgages, or any other obligation.

2. You Aren’t Responsible for Your Partner’s Pre-Marriage Debt

If you have a pre-marriage debt in just your name, you aren’t responsible for what they owe (and vice versa). Getting married doesn’t magically mean you are on the hook for repaying that obligation. The only way that can happen is if the debt is transitioned into both of your names, such as through a refinance, something that won’t happen automatically.

However, if you cosigned on the debt before the marriage, then you are responsible. Cosigners have the same repayment obligations, regardless of whether they are married or even related.

3. Their Credit Doesn’t Affect Your Score

Once you’re married, your spouse’s credit doesn’t alter your personal credit score. That number is a reflection of the activity associated accounts in your name, not theirs.

The only time a spouse’s actions will impact your score is on debts in both of your names. If they are the primary and miss a payment, even though you’re the second person listed, your credit is dinged, too.

4. But Their Credit Does Affect New Joint Accounts

However, if your spouse has bad credit, it will impact your joint creditworthiness. For example, if you apply for a mortgage together, both of your scores are examined by the lender. If one of you has a less-than-stellar score, it hurts you both. You could end up with a higher interest rate or could even be denied, regardless of whether your credit is amazing.

5. Post-Marriage Debt Could Be “Community Property”

If you live in a community property state, any debt incurred after the marriage is viewed as joint. This includes debts that are only in one person’s name. As a result, if your spouse acquired a new debt post-marriage, you could be on the hook, depending on where you live. Community property states include:

In common law states (essentially all of those not listed above), whether a post-marriage debt is joint depends. Usually, if it’s only in one person’s name, then you don’t share responsibility with your spouse.

However, if you benefited from the debt, then the rules change. For example, if a credit card bought groceries for the household, then both spouses could be on the hook, even if the card isn’t in both partners’ names.

7. Debt Can Tear You Apart, But It Doesn’t Have to

When it comes to couples fighting, money issues are a primary cause. However, you can avoid this issue by embracing open and honest communication.

Talk about your debts before you get married. Agree on a plan for dealing with any obligations. Get on the same page about the future, including saving for joint goals or improving credit scores to make accessing mortgages or other options possible.

Through communication, you can make sure that money doesn’t become an issue. Then, you can deal with your debts, knowing that you’re both moving toward a better financial future.

Can you think of anything else couples need to know about marriage and debt? Share your thoughts in the comments below.

Here Are 3 of The Best Savings Accounts For Young Couples