How to Tell Your Spouse “NO” When They’re Overspending 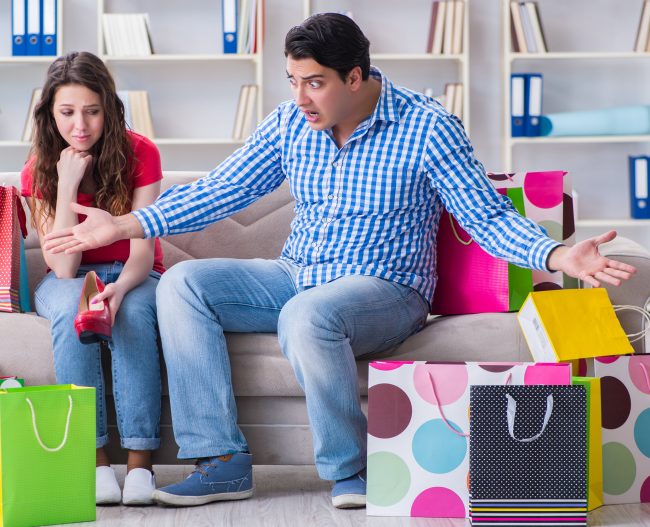 When Simply Saying “No” Is Okay

First, it’s important to understand that there are times when a simple “no” is sufficient to address your spouse’s spending. Usually, this applies if your spouse asks for your input about a potential purchase. For example, they may ask if you agree that buying an item is a good idea. If so, saying “no” is a reasonable response if you disagree.

However, the situation changes if saying “no” equates to scolding. If there is hostility or you interject with a “no” when they try to make a purchase and don’t request your input, the odds are high that your opinion won’t be received well. As a result, barring the example above, using another approach is usually a better idea.

What Not to Say About Your Spouses Overspending

As mentioned above, there are situations where  you must tell your spouse “no” when they are overspending, although it may not be a wise move. Depending on your tone or approach, your interjection can be interpreted in a number of ways. It may seem disrespectful or as if you’re treating them like a child, neither of which is ideal. IN some cases, it may feel like an attack, making your spouse feel hurt and defensive.

Similarly, expressing your discontent by starting a conversation with a statement like, “You’re spending too much money,” isn’t typically best. It’s an accusatory sentiment, so there’s a good chance your spouse won’t respond well.

Asking, “Do you really need that?” is another bad choice. The same goes for “Buying that was stupid” or another approach that implies you’re questioning your spouse’s intelligence.

Essentially, you need to think about how what you say may be interpreted by your spouse. By doing so, you can make the conversation less confrontational, increasing the odds that you can have a productive conversation where you both feel heard, respected, and valued.

How to Talk to Your Spouse About Their Overspending

If your spouse has a tendency to overspend, you need to approach the topic in an unthreatening way. Ideally, you want to let them know that you’d like to have a conversation about your joint finances in a neutral way.

For instance, you may say, “It’s been a little bit since we’ve had a conversation about our financial goals. I’d like to have that talk.” This approach isn’t accusing anyone of wrongdoing. Instead, it’s about having a discussion that’ll help you both get on the same page, making it feel more open and welcoming.

Once the conversation begins, start by focusing on the positive side of the equation. By talking about hopes, dreams, and priorities first, you keep the tone headed in the right direction. Just make sure to ask your spouse for their input first, allowing you to learn a bit more about their thoughts and, potentially, giving you some clues about the “why” behind activities you view as overspending.

After you’ve spoken about goals, ask your spouse what worries them most about money. Spending can be an emotionally-driven activity, so it’s wise to ask for insights. This also allows you to learn more about their motivations, potentially shining a light on the core reason for an issue. Plus, it gives you a chance to follow up in a way that’ll allow you to discuss your concerns shortly.

When you’re done discussing your spouse’s worries, mention any concerns you have about not having enough money, as those are likely tied to your frustrations about your spouse’s overspending. By highlighting your discomfort in a general fashion, you keep the conversation neutral.

At that point, you can start addressing overspending by ensuring you are both realigned to your joint goals. As you talk about your new priorities, you can start identifying areas where cutting back is logical. Don’t necessarily hop straight to your spouse’s spending habits. Instead, look for any issue that could need addressing, including mistakes you may be making or actions on your part that don’t match with your new priorities.

Create a new budget together, allocating every incoming dollar to a particular purpose, including setting some aside for fun or personal spending. By accounting for every cent, you craft a framework to guide everyone’s spending activities. However, by giving you each some money to use how you please, you also maintain a level of freedom.

After that, schedule follow-up meetings. That way, you’ll sit down with each other regularly to gauge your progress and refine your approach. Ideally, this will help you both develop new patterns, all without having to be confrontational about your spouse’s spending.

What to Do If That Strategy Is Ineffective

If overspending is still an issue after using the process above, you have a few potential courses of action to consider. Often, getting assistance from a professional is a smart move. Exactly which one will benefit you most depends on the specifics of your situation. However, working with a financial planner, mental health counselor, or financial therapist could be options that are worth exploring.

After that, you may need to find ways to protect yourself or create barriers to overspending. For example, you might want to have a separate account for bill paying and living expenses, ensuring that money isn’t spent on non-necessities by mistake.

Automating your savings and investing can whisk away cash as soon as your paycheck comes in, making it harder to tap. Then, if you turn off overdraft protection, any spending accounts can’t be overdrawn by mistake.

In cases where these approaches aren’t effective, then it’s possible you, and your spouse won’t end up seeing eye to eye on finances. At that point, you can try to separate your financial lives in a more significant fashion, such as by restricting access to accounts or setting up postnuptial agreements.

Is The Relationship Worth Maintaining

However, you may also need to decide if the relationship is worth maintaining if your spouse’s spending continues to be a sticking point. Ultimately, only you can determine if any action in that department is necessary, so spend time reflecting on the situation to see what seems right for you.

What are some other tips to tell your spouse “no” when they’re overspending? Do you think that telling a spouse they can’t spend money how they want is inappropriate? If so, how would you approach the situation? Share your thoughts in the comments below.

Host Your First Thanksgiving Without Going into Debt

How To Pull Off A Christmas Themed Wedding on 10K