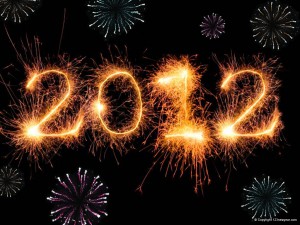 By the end of 2011, Eric had just started working again after being a fire academy student for four months. This past year, he worked part-time for the first eight months of the year, and finally landed a full-time EMT job with a local fire department.

This is how we did on our goals:

We opened a Roth IRA in each of our names, contributed $100 and haven’t touched them since. I can’t decide whether we should maximize our 401K first, and then Roth, or what…suggestions?

I am so, SO grateful that I got my eye surgery. I LOVE not having to mess with contacts anymore and I haven’t had any issues.

I have paid off TWO student loans and brought our debt under the $20,000 mark.

I can’t believe how well I did with the side hustle this year. It allowed us to go on our honeymoon, and travel, as well as pay off debt. I have made more than $8,000 in extra income this year.

Right around making significant progress on our debt, I think finally going on our honeymoon was the highlight of the year. Costa Rica was beautiful and we both hope to go back one day.

We did not save $10,000. Not even close. We just had way too many other things going on. If we had stayed in the shack, it wouldn’t have been an issue, but sometimes your sanity is more important than money.

I am perfectly content with where my blog is right now. Throughout this year, I reevaluated what it meant to me, and decided it’s nice if I make money, but that’s not the end goal. If I do end up making money – it’s tax deductible, so I can write it off when I efile! More than anything, I want it to remain a hobby.

Well, I ran two half-marathons this year, I lost weight, and was healthy maybe 80% of the time. However, the holidays have been kicking my butt and I seem to be back on the weight gain wagon…c’est la vie.

12. Be nicer to the husband

I definitely failed on this for the first half of the year. We were struggling financially a lot, and I would shoulder blame on Eric. I often said though, that if we had more money, we wouldn’t have much to argue about. And my theory has proved to be true. Since September, when we received Eric’s first four-figure paycheck of our entire marriage, we haven’t argued much at all. Not about money, or really anything else. Not having to worry about money has relieved a lot of stress from my shoulders and I’m happy to report that we’re both doing incredibly well–and yes, I have been way nicer.

How did you do on your goals this year?

How do you really feel about sell at home parties?

Don’t tell me how to spend my money at Christmas (Alternate title: The Pressure to Donate)

Can You Trust The Twine App With Your...

Top 5 Questions For Couples About Money

Budget In Review: Where did our money go...

I just found your blog and I’m really loving it. I am a huge fan of Suze Orman and she recommends funding your 401K up to the employer match and then maxing out a Roth IRA. If you have money left over after that, go back to the 401K. I just think it will be so great to not have to pay taxes on that Roth money once you retire, esp since, most likely, your tax rate is rather low now. Looking forward to reading more of your posts!

You have had a truly awesome year! That’s so exciting that you are contributing 10% of your income to your 401k. Yall have made huge strides, and I truly believe that people who work hard reap the rewards. I think the only place yall have to go is up.
xo
Cat

Regarding Roth v. 401K contributions. We’re in talks with a financial planner, so this has been on my mind this week. I *think* they’d/I’d advise that you contribute to your 401K to get the match, but that it’s always good to have the money as much in your control as possible, and with the fewest partners as possible. With the 401K you have the IRS as a partner until you withdrawl and pay taxes on it. Since Roth is post-tax $$, it’s truly yours to build until retirement.

To put it in context, our financial planner suggested we roll over my H’s 401K from a former employer into a Roth. We’d have to pay taxes on that money to do so and it was upwards of $20K in taxes given the current rates!!! Insane! But it really made me think about how much you are going to eventually pay in taxes on 401Ks or traditional IRAs. 401Ks are a good thing and you should get the max benefits from them, but I tend to think Roths are better just so you at least have the tax thing taken care of.

And needless to say, we won’t be rolling that 401K over any time soon. I have way too many other things to spend a random 20 grand on when I have it 😉

um, you did AWESOME my friend!! so so impressed!!

This is super inspiring! I came across your blog early last year when I set a new years resolution to pay off (and keep off) credit card debt, which I’ve accomplished! Your blog has kept me motivated along the way and is always a reminder that I’m not alone in this crazy financial journey. Thank you for your honesty and I look forward to hearing what your 2013 goals are as well as creating some of my own. Thanks again 🙂

Wow – you kicked ass on these goals! And they weren’t tiny goals either, they were big ones. Sounds like 2012 treated you well!

I only had one goal this year: run my 2nd marathon. I did it in April. I guess I need to spend some time coming up with goals for next year. So far, I am drawing a blank!*

Nice one! I don’t think we did so crash hot on our financials, but I am happy overall with my overall wish to travel more and LIVE more this year.

That’s awesome. And just think of how easy it’s going to be to get the one remaining next year now that the hubs has full-time work, you won’t have to fund another honeymoon or eye-surgery!

We really only had one big goal at the beginning of the year, and that was to put an average of $3K into building up savings or paying down debt each month, and we’ve got that one in the bag. But now we’re in the process of writing down some more specific goals for the next year – and it’s a hard process!

I think money is the only thing my hubby and I ever argue. Usually it’s me spending we need to watch our spending and spend less, and hubby saying we are young and need to live life.

Wow you definitely did great. I haven’t looked at mine in a while, I’m afraid to!

I’m scared to pull mine out and post ’em! Sounds like you did a good job on most of yours. That’s great. The rest can go on the list for next year. They say that money is one of the main things couples argue about. Glad things have improved in that area for you both.

Congrats girlie! You (and Eric) have worked very hard!! =)

That’s a great score! That’s a ton of goals to get through and I think you did an amazing job completing them! I only had three goals last year and I completed them all. so I’m really pleased with that.

Where our Finances Stand