Hi, my name is Erika and I break things.

My habit has probably cost me hundreds, if not thousands of dollars over the years.

We had a full Reidel wine glass set when we got married, and I broke every single glass.

So we bought another set, and I broke those too. That’s at least $200 worth of expensive wine ware down the drain.

For normal every day drinking glasses, we had a moderately expensive Crate and Barrel set. I broke all four of them. 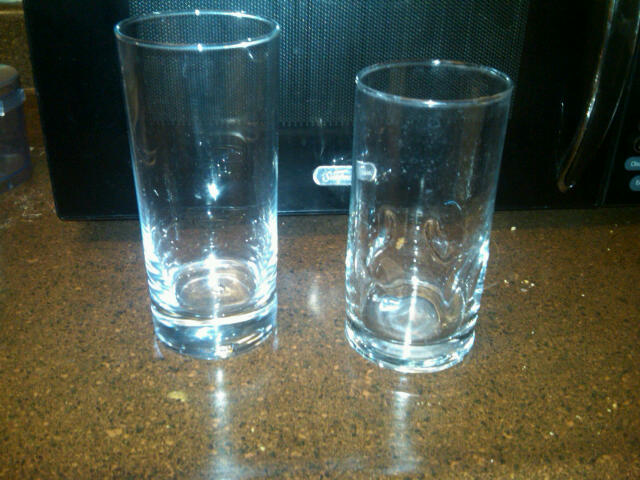 Because we couldn’t afford to replace the Crate and Barrel set, we settled for TJ Maxx. But apparently those are also too much for my clumsy hands, and I broke those four glasses too. We have now downgraded to Pilsner glasses from Walmart, people, Walmart! So far, I’ve only broken two.

My senior year of college, I crashed my friend’s car – that cost me $500. She was super cool about it but still I felt bad.

At our old place, I broke the garbage disposal four times. And of course, Eric had to fix it each and every time.

Did I mention that I’ve also broken my dog’s foot?

And then, exactly a year later, I broke his eye? (okay, I injured it)

I have a serious problem, people.

Good thing we don’t plan on having kids for a while because this is something I need to seriously work on before the babies come.

Are you clumsy too?

How to make money with your blog (even if you don’t have a lot of readers!)

[…] three pairs of brand name sunglasses. But, everyone knows I’m notorious for being clumsy and breaking things. I would either break them or lose them. And spend another several hundred to replace them. This […]

My spouse describes me as, “droppy.” ie – I have the world’s largest blackberry case, because I would have a shattered piece of plastic and metal by now if I didn’t.
You are making me worried about my Riedel collection though… so far only my spouse has managed to break one of the (cheaper) stemless glasses. I’m better at spilling red wine on things than breaking those.

Wow, the WHOLE SET of glasses? That’s an accomplishment 🙂 And yes, I’m clumsy – I’m typing this lying on the couch with my feet up because I broke my pinky toe by opening a door on it yesterday.

Don’t you just hate it when those glasses just jump out of your hands? 😉

I’m extremely clumsy! And this clumsy part of my speads to anything techy too! I broke a dvd player by tripping over it and just recently closed my fingers in the car door. It wasn’t fun 🙁

I am super clumsy, which is why I have $2 Walmart wine glasses and plastic plates from Target to eat on. I have one set of nice plates and I never use them for fear I will destroy them.

you ought to consider buying plastic cups. much tougher when being dropped. 😉

Clumsy? Who Me? Neeverrrrrrrrrrrrrrrrrrrrrrrrrrrrr. I tend to break MYSELF more often than anything (Like bones. Lots of them) But I have had my fair share of breaking cups, plates, glasses, etc. When we got married, the only thing I cared about when it came to china patterns were how often it breaks, can it go in the dishwasher, and does it come with a guarantee. We settled on BONE CHINA (the girl STOOD on the cup in the preview. (STOOD on it. Like all of her weight on the cup and it didnt break!) and it has a lifetime replacement guarantee. The pattern is plain white, but I like it.

I am sure you are wondering, but I have indeed already gotten two replacement sets, and we have only been married one year. Unbreakable, I THINK NOT. But I havent paid for a single replacement because of my forward thinking! 🙂 hehehe..

As for cups, THESE are the wine glasses I pine for.. (http://www.amazon.com/Govino-Shatterproof-Stemless-Wine-Glasses/dp/B002FOFFW2/ref=wl_it_dp_o_pC_S_nC?ie=UTF8&colid=3JRHRC85EQ1N0&coliid=I10Z1RA1P5I1O8) SHATTERPROOF but pretty. Govino makes them for white, red or champagne. When you think about it, if it REALLY is shatterproof, you will only have to pay $7 each one time!

I havent broken my dogs, but I have indeed fallen over them a few times (They are chihuahuas. I could have KILLED THEM.) Thankfully they have learned to steer clear of me when I am on the move. LOL. Poor babies!

Seriously E, If clumsiness were genetic I would swear we were related.

I’m not clumsy…but my fiancée and all of his siblings are. We only buy the cheapest glassware because of his propensity for breaking them. Last Christmas we received two moderately expensive glasses as a gift, they were both broken (by him) within two weeks.

My advice would be to impose a penalty for every time you break something. For my fiancée, every time he spills wine, he has to spend the rest of the night drinking it out of a sippy cup. It actually works!

If it were an Olympic sport….you would take gold:)

Haha! I am clumsy too, but you sorta take the cake there 😉 heehee

You may want to consider bubble wrapping everything you own and love…. 😉 I’m pretty clumsy, but fortunately it usually only results in minor injuries to myself. Which I’ll take, because it sounds MUCH cheaper!

Haha I’m with you on this! I’m SUPER clumsy. And I forget everything. I don’t know how people deal with me.

I am why I can’t have nice things!

I broke two of an ex boyfriends fingers.. by accident… while we were still going out…while we were making out.

Don’t worry about breaking babies. They’re pretty squishable when they’re small enough to be wrapped like baby-burritos, and when they get bigger they’re fairly top-heavy, so they’ll knock themselves around pretty good, saving you the trouble! hahah!

In all seriousness, you’ll be an awesome mom some day. Have no fear.

My boyfriend is super clumsy and our solution has been that he doesn’t get to use glass cups. Our friends even have special “August” cups that he has to use when we visit that are plastic. At home we have a bunch of tervis tumblers (http://www.tervis.com/) and that’s all he gets to use. He’s been only allowed to use those for over a year now, and we’ve yet to have any more broken glasses. 🙂

Girl, I’m SO clumsy! I break things and run into things… One time, I ran into the corner of the laundry basket and had a huge bruise on my leg. My boss asked me if my husband was beating me up! hahaha. I’m always running into things, breaking things…

It’s hard being an EMT’s wife

The Best Ever “How We Met” Story