Every year, I like to do a review of our finances. I think it helps to sort of check in and see how you’re doing financially and if you’re meeting your financial goals.

Now that I have a couple of years’ worth of data collected, it made things a bit more interesting.

For example, here is how our take-home income has increased over the past few years. This is after-tax, after 401k-contributions. This is only money that goes into our bank accounts from our day jobs, and does not include side hustle income. 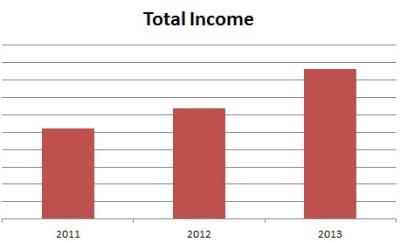 Where did we spend our money?

For every $100 we earned, this is where most of the money went:

In the end, here is what I thought our 2013 budget was going to look like: 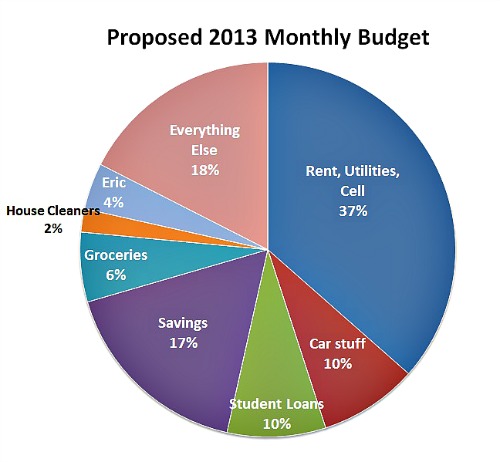 And here is what our 2013 budget actually ended up looking like: 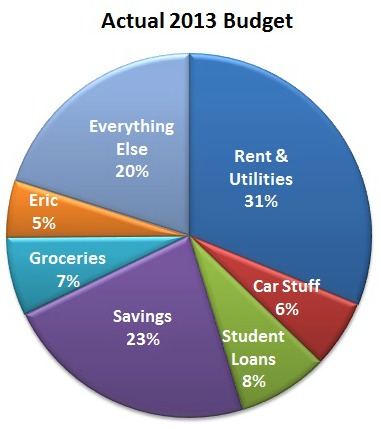 2013 will be remembered as the year I paid off my student loans and Eric got hired as a firefighter. 2014 will be the year we finally start saving for our future rather than paying for our past.

My Relationship with Food and Our Journey toward Clean Eating

Wow nice job not only how you did (especially on side income) but how well you tracked everything! BTW I also commented on your exercise/fitness blog but I don’t think my comment went through, so congrats on that as well. I track my budget, but I never do a full scale data analysis. This would at least help me examine trends. Hope 2014 is an even better year for you both!

You guys did really well in 2013, and I think 31% for rent and utilities in SoCal is really good!! We’re spending less on rent and utilities but much more on transportation and car expenses. I want to change that in 2014, or by the end of 2014 🙂

Wow this is great! Congrats! 2014 will be my loan pay off year {crossing my fingers} Do you have any advice about your everything else category? Do you break it down for yourself in more detail? I’m having a really tough time reducing that part of my budget and I’m wondering if I should create categories for each little expense to track it.

I do break it down for myself in more detail. For example, I keep track of how much money we spend eating out, stuff we buy for the house (cleaning supplies, fixer upper stuff, decor, furniture), gifts we purchase for others, and even our gym dues etc.
All of those little things go into the other category. While I know where pretty much every penny goes, it just seems easier to lump everything into one category rather than being like “ok we spend 3% on gifts, 2% on gym, etc”
at this point, it’s not so much that we have a budget that we stick to (ie, we can ONLY spend $350 on groceries) but more so that we like to track where our money goes so we can identify areas to cut. We’ve reached a sweet spot in that we’re living pretty comfortably and we know about how much we can spend month to month, but some months we may spend a lot more on groceries than other months. We don’t freak out about it, we just do better next month. It’s always important to us that we’re saving as much as possible and don’t let ourselves get too crazy with spending.

This is great, I’ll take your advice and not freak! I’m going to try focusing more on the dollar figure I commit to save rather than pressuring myself to meet a certain budget limit each month for every small category. This way I can focus on the progress towards the savings goal rather than obsessively counting pennies. I’ll have to cut back on spending anyway in order to make my savings commitment. I think I’ve had a breakthrough! Thanks again!

This is awesome. Debt went down, spending went down, savings went up. That’s what we’re aiming at. Good luck again in 2014~

Your income and savings have gone through the roof! Congrats, that is so inspiring. Glad you are rid of those pesky student loans 🙂

Thank you! It’s taken us a while to get here but so glad we’re finally moving on!

I love that quote! Saving for our future rather than paying for past. I also cannot wait for this!

Wow it’s great to see changes over the years. I look forward to being able to look back on savings with Mitch a few years from now,… (once a huge chunk of my student loans has been paid off). Mitch and I do pretty good saving when it comes to groceries. We buy our canned goods at inexpensive dept stores like Walmart, meats we buy in bulk at BJ’s and then we only purchase our fresh produce at the reg. grocery stores. We are usually able to come in under $50 a week and I do a lot of cooking at home.

wow, $50 a week is AMAZING! Even when we were really broke, we still spent around $300-350 a month. Now that we try and eat more organic produce and meat, it’s even more expensive. Ugh! Will have to mix in some pasta dishes for sure : )

I really need to get some of your excitement with paying off loans. It’s easy to think “well they’re just student loans and low interest” and not worry. But it’s still interest! I need to get that crap paid off! lol

you’ll get so excited seeing the balance go down!

Nice job! We are also trying to reduce our grocery bill this year! We also spend between $500 to $700 per month. That’s just too much for two people.

I agree! Right now, we’re trying to stick to $500 a month–and it is REALLY hard. Although this month I have some leeway since my husband is taking lunch every day, which means I’m saving the $200-300 he spends on buying food at work!

Haha T also spends all his allowance on food and drinks.

Are those $ signs in the table meant to be %s?

“2014 will be the year we finally start saving for our future rather than paying for our past.” That’s freaking awesome – congrats – and such a succinct way to put it.

Love the increase in savings, as well as this idea of how to gauge one year from the previous one! I’ll have to start this year since we’re starting to combine finances. Great job, Erika, can’t wait to see when you hit your $30k savings goal! 🙂

It’s definitely fun to see the progress now! It wasn’t so fun at the beginning :/ And now that I’m three years in, my budget looks fantastic! I love my excel spreadsheet

Wow you are saving an amazing amount of your income! We aren’t near that figure yet, but once we pay off our student loans I sure hope to be!

well, as you can see, we weren’t saving nearly as much in previous years! IT has taken us 3 years to get to this savings rate. We’re hoping 2014 will be the financially best year yet

You are so organized! Wow. It’s really good to take stock of where the money is going. $800 bucks on groceries does seem a lot. Food is so expensive. Our budget is $350. I think we do go over sometimes depending on what’s going on.

That last line is perfect. Half of 2014 will be just like that for me as well. Very interesting way to put it, by percentage of income.

Wow, you have made huge strides my friend! I think ‘my’ spending vs M’s would be equally on personal grooming for sure, I am kind of glad I don’t track it though, I think I would outnumber him much more than 4-5 bucks hehe. oops 😉 I love your savings goal, pretty much ours too 🙂

The last sentence says it all. Your focus is changing and that’s a wonderful thing to be able to do! Best of luck with the new year and hopefully with Eric’s new job your income growth will have another solid step upwards, too.