This past weekend, I took part in my first taste of Life Inflation.

You may remember, life inflation was on my list of goals for 2014. After suffering through our “broke-ness” the past 3.5 years of our marriage, I really wanted 2014 to be the year we get to enjoy the money we earn.

SO when one of my really good friends from high school mentioned she was throwing herself a 30th birthday bash in San Francisco, I of course said yes!

Normally, I would have had to budget for a trip like this months in advance. But this time, I didn’t even have to take money out of savings and could just pay for it directly, pretty cool right?

I guess that’s what happens when you become a baller and can make it rainnnnn….

Speaking of rain…What I didn’t anticipate is that her birthday would be the same weekend that SF decided to endure a storm that would bring in 9 inches of rain and wreak havoc on the airport…something about fog…pshh.

My 6:30 pm Friday night flight ended up becoming a 9 am Saturday morning flight that was then delayed to 11:10 am. By the time I arrived in SF, it was 2 pm and the party started at 6.

The bright side of the 17-hour flight delay was that I got to wear all five pieces of winter clothes I own. Glass half-full, right?

I ended up staying with my other good friend from high school who works for Google and I think it’s super cool because she does top-secret stuff she’s not allowed to tell me about.

I asked her about that secret island, but she says she doesn’t know….hmmm…

We made it to the party and had such a fun time catching up with our friend and her parents, as well as her grandparents whom have the most adorable ridiculously whimsical love story you’ll ever hear. I plan to spotlight them soon…

There’s something about San Francisco that just makes my heart feel full. It is absolutely my favorite city. I love the sounds, the smells, the architecture, and the FOOD.

Although I traveled solo this time, I told Eric that even though we can’t take any long trips this year because of his work schedule, I plan on us taking several weekend trips to San Fran. He seemed okay with that idea.

On Sunday, my flight was scheduled to leave at 3:35 pm. I had to get on the BART early enough to actually make it to the airport, but in my heart of hearts, I knew my flight would be delayed.

Sure enough, five minutes into my BART ride, I got a text saying my flight was delayed til 5:30.

I ended up figuring out a way to keep myself occupied at the airport for 4 hours. 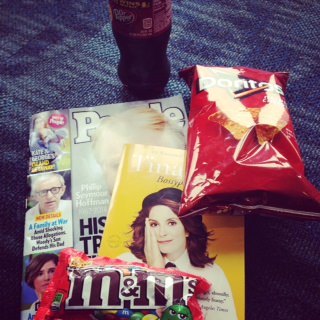 It’s moments like these, where clean eating goes completely out the window.

By 6 pm, I was finally on a plane. And I think my tired self was showing through. 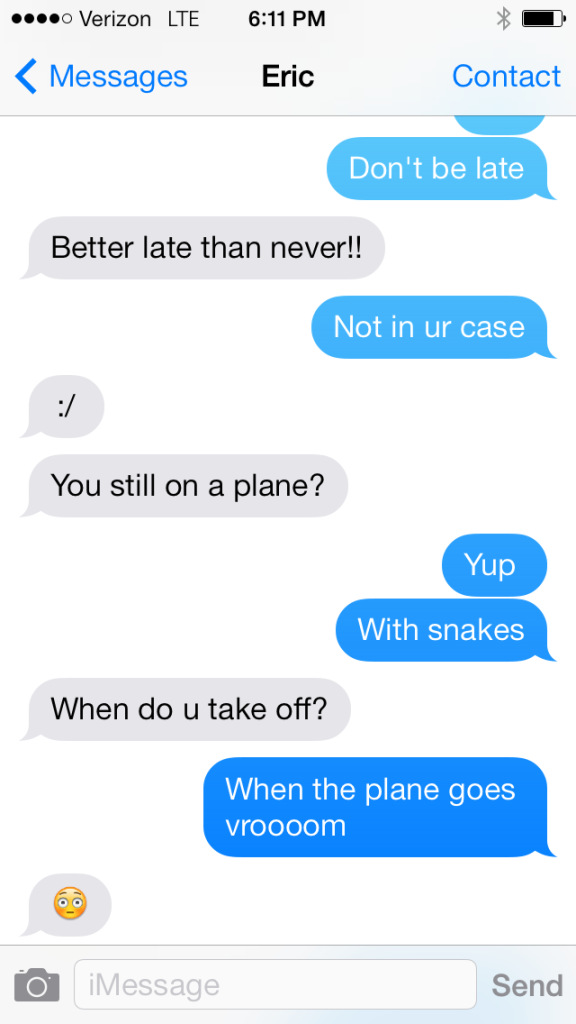 And this is why I was an English major.

Do I need life insurance?

Glad you had a fun girl’s weekend! I love trips like that. They may not always be practical, money-saving, or time-saving, but they mean a lot. I’ve been thinking a lot about the importance of money in terms of allowing us to live our lives and spend it with the people we care most about. A friend of mine always says that the two best things to spend your money on are education and travel because no one can take those away from you. And I think that spending money to travel to spend time with friends and family always ranks high in my book!

I find it interesting that people assume it was southwest. I’ve flown them for years and maybe had one or two flight delays. Not bad at all. Glad you were able to have a fun girls weekend though!!

yeah perhaps southwest is known for flight delays, but I’ve always LOVED their customer service. I would fly southwest over american airlines any day

You must have flown Southwest? 🙂 Sounds like them anyway. Glad were able to make the trip and it was a no-brainer. “There’s something about San Francisco that just makes my heart feel full. It is absolutely my favorite city. I love the sounds, the smells, the architecture, and the FOOD” So much word! I love going through North Beach because it smells like garlic. mmmmm

Wow. That is some crazy travels!!! Glad you had a great time and that you are enjoying the fruits of your labor. Just a little bit of life inflation won’t hurt!!! Weekend jaunts to San Fran sounds great. I have a sister that lives up there and I’ve been trying to make it back.

So sorry to hear about all your flight delays… they are so frustrating. I’m glad you had a great time though. Plus, planning a trip to SF in the Spring = no weather delays! 🙂

Oh, also, Travelzoo.com always have deals on things to do in and around SF. And I always see a lot of deals pop up for the March/April time frame.

Glad you had fun in SF, despite the rain (which we did need badly!) and flight delays. Where all did you go?

This past weekend was much needed up here! Some places in Sonoma County(where I live) got close to 20″ of rain! We got a little over 12″ in 48 hours, which hasn’t happened since it flooded in 2006!!

I like going to San Francisco as long as I don’t have to drive. People there don’t seem to know how to drive well!

What a great video at the beginning of your post. Pretty symbolic of the current administration’s approach to our money! Anyhoo……looks like you had a nice time with friends in spite of your rough trip. But perhaps driving is the better way to go. No TSA agents afterall!

haha wow! I didn’t even think of the political implications, I just thought “hey it’s obama, and he’s making it rain!”

Those are some rough delays! I think we probably would’ve driven or taken a bus for such a short trip.

Glad you are enjoying a bit of lifestyle inflation 🙂

Your text exchange with Eric is sooooo totally something that would go on between me and G-man. HAHAHA!

i may be a baller, but I’m still too cheap to pay for priority boarding on southwest ; )

GAH I HATE FLIGHT DELAYS. I went to Vegas last summer for a weekend. A weekend is a freakishly short amount of time for a trip anyways. Our flight was supposed to leave at 8 p.m. Friday and we finally took off at like 1 a.m. after getting trashed in the airport bar. It set the entire trip off on a bad foot — we were exhausted and hung over by the time we got to Vegas (4 a.m.) and slept most of Saturday. Then, I was too tired to even go out Saturday night! #VegasFailure

Your texts are hilarious. I’m glad you at least got to spend some time in SF!

I really feel for you and that sort of delay… I have never, ever been to a flight @ BWI that wasn’t at least 1hr delayed. Around here, you pretty much just count that as your departure time… just add one hour and you may be close to an actual time. Last time, we were sitting in the plane for about 2hrs before we could fly up because of t-storms in Ohio. But it still sounds like you had a good time! I plan on super charging my Kindle for my upcoming trip and catching up on reading books… I left off Sherlock Holmes in the middle of Baskervilles!

Why I Started Giving Money to the...

How do you really feel about sell...