When are you happy with your budget? 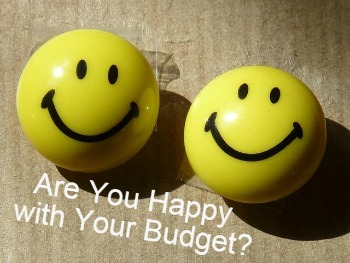 Eric and I are at the point that we’ve paid off our debt, are making a lot more money than we used to, and are saving up for a down payment on a house.

We’ve managed to save up a good amount of money in a short time, mostly because we’re still living on (almost) the same budget we had when we were aggressively paying off debt.

While we always try and be conscious of our spending , at what point do you just flat out say “We can afford this, it’s okay to spend” ?

For example, while I was ready to jump on board on switching to a cheaper cell phone plan as soon as our contracts expire next month, Eric doesn’t really want to.

He likes the service we have, we’ve never had an issue, and he uses a good amount of data to stream music. It wasn’t really worth it to him to save an extra $20-40 a month.

Another thing is cable. I would really like to cancel our service and then re-sign a new contract to take advantage of cheaper pricing. Eric doesn’t want to go through the hassle and says we can cancel when we move instead (who knows when that will be?).

When we switched to eating organic, I gave up on trying to keep our $350 monthly food budget. These days, any time I’m under $500 that’s a cause for celebration.

Granted, everyone makes sacrifices for what’s important to them. Some people willingly give up cable in exchange for a bigger clothing budget or vice versa. People like us save money everywhere else in order to afford travel.

While I still track every penny we spend, it’s more to really see where our money is going. For the most part, we are pretty much on auto-pilot when it comes to our budget. Some months we’re over, some months we’re right where we need to be.

Is it worth it to stress and agonize over every purchase? Before, our goal was to pay off our debt. Now our goal is to save for a house.

We’re still on track to hit that milestone by the end of this year, so shouldn’t we be at the point where as long as we hit those milestones, we should be happy?

You can always save more, you can always spend less—at what point are you happy with exactly what you’re doing with your finances?

Are you happy with your budget?

How to Achieve Your Goals with The Timeline Project

I don’t think I’m honestly ever satisfied with my savings or my budget. I feel like I can always tweak things around and make my budget tighter and or more strict.

We’re mostly happy with our budget. It’d be great to lower our rent payment, which is probably going up next month (lease is ending), and possibly our grocery bill (we spend way too much for 2 people!), but over all we’re doing pretty well. We’re also working on saving for a house for next fall or winter – as long as the market doesn’t shoot up any more than it already has! That keeps us focused on saving money.

There will always be SOMETHING. If you are debt free, there is always houses, retirement, college for the kids (if you have them). I think you have to look at the budget as two parts: the daily stuff vs the GOAL (whatever that is to you). If you are meeting both, then you should be happy. And if you have hit the goal….then celebrate!

Honestly I’m happy with my budget when I am sure to have extra work in the cafe because I know that i’ll have more money than usual and they will go directly into savings, I’m still a work inprogress into savings and side hustling, but considering that I have important financial goals to achieve soon I need to work really really hard

I can honestly say I am NOT happy with our budget. Though I make it work I’m still playing around with it and fiddling but at the end of the day I realize it’s because of the insane debt we carry, the speed at which we want to pay it off and because we as a family have made the decision to have me only work four days per week (loosing a day of pay for me per week adds up to about $1,000/month in lost income potential). If I was working 5 days a week budget life would be better but I’d be miserable. I’m a much happier person with the balance we have in my 4 day work week….so I’ll suck it up for the next two to three years until this asshole debt is gone.

Mostly we are happy with our budget. Debt-free other than the mortgage, the changes and cost-cutting we have implemented are things that made sense to us and our lifestyle. We still take off-the-top for our periodic and unexpected expenses as well as long-term goals (retirement, home improvements, emergencies, etc.), but we have a Roku and Netflix with a very basic cable package not because of the expense but because when DH has insomnia he wants to watch whatever catches his fancy and not whatever happens to be playing at 2 a.m. on Tuesday. Same with our grocery budget and our organic food shopping. It is more expensive than non-organic, yet for us it is an investment in our long-term health. We cancelled our gym membership because we are getting enough exercise from our hobbies and outside exercise pursuits. I am always thinking (and worrying) about our future retired selves, but we are saving and maxing our retirement vehicles and contributing to taxable investment accounts. Hopefully it is enough and we will be okay.

Ours is not an extravagant lifestyle to begin with, and we are reluctant to cut back much further right now. As we get closer to the really expensive home improvement project -(hello new kitchen!) that is still a few years down the road, we will likely tighten our belts to save more and get there faster. Until then, though, I think our balanced approach keeps us calm, sane, and content with our lives.

Our gas/electric bill has been super high but we still use our AC. I think we are pretty conservative but we don’t want to sweat! The cable is a thing too. It’s a lot of money!! I don’t want to get rid of it though because I enjoy it and have been too lazy to research other options. Also, our grocery budget is $350! I think we stick to it for the most part. I guess I’m okay with our budget but it’s hard to escape that feeling of thinking we should still trim stuff and be extra vigilant. Sometimes I just want to say to hell with it and enjoy life and not worry so much!!

We still have a way to go to be debt free, but we also have some of these same issues. As a busy mom, things that are a hassle are often just not worth the cost reductions I might see (like, clipping coupons. I have babies to play with and snuggle). That’s not to say I’d never do something like cancel a service and re-sign, but I am always weighing the time and hassle cost, just as much as I weigh the cost savings.

Such a great question and one I think we all struggle with! While we haven’t had a period of intense paying off debt or reaching a savings goal, I think we let off the gas a little in terms of how tight we kept our budget when we reached many months of expenses in our short-term savings accounts. One of our values is definitely to have a balanced life, so for that reason I don’t think we would ever let ourselves go really extreme in cutting our spending unless there was a dire situation. So in that sense I am happy with our balance of saving and spending right now. I’m very goal-oriented and future-focused so I wouldn’t really celebrate when we reach a milestone – I’d just set the next goal! My husband is more about enjoying the present, so he helps me do that for sure.

Exactly! It felt like as soon as we paid off debt, the next goal was to save for a down payment, so we’ve never really let ourselves get TOO crazy, xcept for a couple of months where our spending was higher than normal (and still not anything extravagant)

Is Mortgage Life Good for a New...