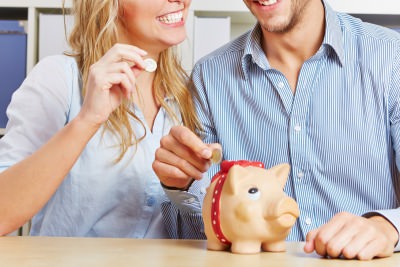 I originally wrote this post for GoGirl Finance. I have updated it to reflect our last check payment that we made last week.


It wasn’t until about three weeks after our wedding that Eric and I decided to sit down and go over all our finances. This is when we discovered that we had more than $45,000 of combined debt:

Starting off our marriage on such shaky financial ground put us into a panicked frenzy and is exactly the reason you should talk about finances before you get married.

But we did what we had to do: we came up with an action plan. We talked about our financial goals as a couple and created a budget that would help us achieve those goals. We focused not only on paying off our debt, but on saving for vacations, a down payment on a house, and enough wiggle room that we could still enjoy an occasional night out.

Paying off debt even when you’re broke

Some people like to believe that everyone who focuses on paying off their debt quickly must have a substantial income in order to do so. But in our situation that couldn’t be further from the truth.

We had several setbacks that pushed our goal of financial freedom further away, such as:

It was during these moments of financial stress that our resolve would weaken and we would question whether paying off our debt at an accelerated pace was worth it.

But we stuck with it, and every month we simply did what we could.

In order to pay off our debt and create the life we would want to live, we knew we were first going to have to make some major sacrifices. Typically, in order to pay off debt faster, you need to create a combination of spending less and earning more, so we did just that.

Some of the sacrifices we made to spend less included downsizing from a one-bedroom apartment to a studio  (which I liked to call “the love shack“) and postponing our honeymoon to Costa Rica for more than two years.

Downsizing helped us contribute an extra $500 a month toward our debt. And we used Dave Ramsey’s Snowball method

to keep tackling our debt.

Every time we paid off one loan, like my car loan which came with a $434 monthly car payment (eek!), we then started to contribute that monthly amount toward a new loan rather than spend it.

Other sacrifices we made was limiting our dining out to about once a month. We stuck to a strict grocery budget and, at one point, we were on such a tight budget that we restricted each of ourselves to a $20 monthly allowance, which was enough for one happy hour with friends, or a couple of cups of coffee.

To make more money to help pay off our debt faster, I started freelancing on the side (I made $20k+ in side hustle income in 2013), monetized my blog, and held a couple of garage sales—hey, every little bit helps when you’re trying to get out of debt.

To Be Debt Free

Last week, we completely paid off all $45,000 of debt we originally started with. That feels good!

We currently have $8250 left on a 0% interest student loan for Eric that won’t be due until Dec. 2016. While we have the money in the bank to pay it off completely, we’ve decided to continue to earn the interest–at least until we rebuild our savings by meeting our goal of saving $30k in 2014.

45 months ago, when we decided to pay off our debt, we were making 40% less money than we are now. It IS possible to pay off debt even when you’re not making very much. It just requires a lot of hard work and dedication.

I am so happy with how far we’ve come in our debt journey.

Wedding planning on a budget

[…] Eric and Erika started their debt elimination plan in April of 2010. Over the years, they have certainly had some setbacks. For example, Eric attended the fire academy full-time for four months and he also sustained an injury that caused him to miss some time at work. Even with those events, they’ve been able to become debt-free. […]

[…] I will say that our area–Southern California– is still a very strong sellers’ market. I wish that Eric and I had been able to buy back in 2010 when the prices dipped for the first time in like 20 years, but alas, we had just gotten married and were $45K in debt. […]

I really needed this today. I’m working full time and so is my wife so that we can pay down our $200,000 in debt as aggressively as possible. We don’t want to live with this debt forever, but it feels impossible to overcome. We just reached our first goal of 5% paid off – which seems small, but was almost $10,000 in 10 weeks. We are well on our way, but it’s a long road ahead of us. Thank you for sharing this!

Congrats on getting rid of the debt! Thanks for sharing this journey with us. http://www.protectsaveandearn.info

[…] think Eric and I are great examples (yup, that’s me patting ourselves on the back right there) of what can be done when you work on […]

[…] and I are at the point that we’ve paid off our debt, are making a lot more money than we used to, and are saving up for a down payment on a […]

[…] not sure…I really like those “How I….” posts on Newlyweds on a Budget like this one and this one as well as this one from Young House Love who aren’t really a financial blog but […]

[…] that we’ve paid off our debt, and now that Eric is bringing home the bacon, we’ve gotten excited about the possibility of […]

Wow, congratulations guys! That’s a huge accomplishment. I too know what it’s like to carry a good amount of debt, and it’s an incredible relief to pay it all off. Life is less stressful and much more free when bills don’t have a say in everything you do.

Congrats, that’s amazing! It just goes to show that no matter how much debt you have, it is possible to pay it off (and in less than 10 years).

Paying that big amount of debt in a short span of time is really a great achievement. Congratulations to you! I’ve been visiting this site for quite some time already and I’ve learned a lot from you not just in dealing with finances, but also on how to deal with your partner.

Me and Mr. Bacon live in a little studio apartment too! The lease is up at the end of this month and we thought about upsizing, then decided against it. We’ve got all we need while we tackle our debt! Keep up the good work 🙂

Amazing! Good for you. My husband is just finishing up school this spring and hopefully he can secure a job pretty quickly. Once that happens I’m hoping we’ll continue living exactly how we’ve been living for awhile and put all his extra income into savings. This way we can save up for a second vehicle, save up for a down payment on a house (we have a townhouse/condo right now) and also just have more money in savings for emergencies. I just have a hard time saving for “nothing”. Right now I’m saving for a trip we’ve booked to Ireland/Scotland and I’m putting money away each paycheque like crazy. But when I don’t have anything big to save for I have a lot more trouble putting that money away and not digging into it!

Well done!! What a wonderful achievement and well don’t coming through it together, great job!

So awesome! I started looking into payoff amounts for student loans to see how much was left, and was shocked to find mine down from the original 20k to 14k. I mean, I know I’ve been paying monthly, but it felt like it was stuck at 18k forever!! We start FPU in 3 weeks! yay!

Congrats! It’s awesome that you two were able to work together and accomplish this. It’s notaneasy path to take, but it’s so worth it in the end. Making short term sacrifices for freedom in the long run is one of the biggest factors to me.

Congrats! That was a big number but I am glad your persistence paid off! Can I ask you how you plan on saving 30k? I wanted to set up a goal to save 20k in 2 years for a house down payment but the number sounds so impossible! any ideas/strategies/tips?

Well, I’m planning on making at least 10k from my side hustle job, so that will be its own separate pot. Then I am also planning on saving $1500 a month. Basically, with my husband’s new job, we’ll be making more money, but instead of spending it, we’ll be saving it. We live pretty comfortably now, and we were still able to save at least $1000 a month last year. Our increase in savings is basically because we started making more money, but living on the same amount of money. We didn’t increase our spending but rather started contributing to saving. Also– a BIG thing that helps, is putting the money into savings first. A lot of people will wait til the end of the month and then put anything they have left over in their savings, but usually you’ll find there is never anything leftover. So what we do, is I actually have my paycheck split into two different direct deposit accounts–our checking and our savings. And I designate a dollar amount to go into our online savings first, and then the rest in checking. This way I never see the savings amount, and it forces us to live on less.

You guys are awesome! I bet it feels great to have that burden off your back. We save and we don’t have a lot of debt but I often feel that we could be saving more and spending less just because.

eh, you could always save more and spend less. you have to figure out what you’re comfortable with. I feel like we’ve finally hit that sweet spot where we can afford to indulge occasionally, we don’t feel like we’re pinching pennies, but we’re also still able to save comfortably.

Huge congrats on paying off such a large amount, such an inspiration! Just goes to show that with commitment and hard work, so much is possible! FF

Woo hoo, congrats on $45k gone despite the setbacks – so impressed! The $20/month allowance would have been a challenge for me, so that’s really awesome both of you stuck with it!

oh it was definitely a challenge! luckily it only lasted about five months…

That’s a crazy huge amount in not a lot of time. Bragging rights! We are okay in terms of debt, but I’m always looking to get in a better financial position (especially now that I’m only working part time, that’s more free time to devote to making more moolah). I’ve referred back to your blog multiple times. Thanks for all the tips!

thank you for such a nice compliment!

Congratulations! I love how this post points out that you are not an overnight success. 45 months is not an insignificant amount of time spent.

You guys made some big sacrifices and look how it paid off! That goes to show you if you want something bad enough you’ll do it! Congrats!

Whooo! You’re a huge inspiration Erika. I’m working on making as much money as I can in 2014 so I can pay off a huge chunk (ideally 20k in PRINCIPAL payments)..it’s going to be tough but I really hope I can make it happen!

That is nice, paying off about a thousand dollars of debt a month is a pretty nice accomplishment, add those situations that you were in to, then that made it a great achievement for both of you.