How does this happen? Because even now, I am having a hard time wrapping my head around it.

Here is how our savings has grown over the past seven months: 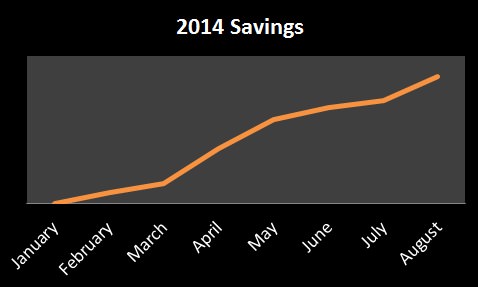 We seriously started 2014 with $2.36 in our savings account–after we had raided our accounts to pay off the last of our $45k debt.

Even though the graph doesn’t show it, we actually took a huge hit between March and April because we had to pay our $4k+ tax bill.

But then May was a three-paycheck month, which helped propel us into saving half our income.

And even though we’ve been living the DINK lifestyle (Cabo, anyone?), and our spending has increased, we’ve still been heavily focused on saving for our ultimate goal of buying our own house.

What’s even better is that this money does not include money we’ve been saving for other things. We still have savings accounts for Christmas, Car Insurance + Car Repairs, Graduate School, etc. This is how our savings accounts are labeled: 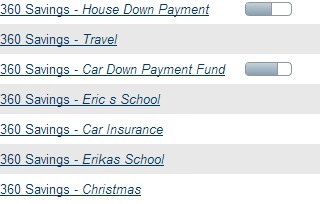 One of the things I love about Capital One 360 (referral link) is that you can set savings goals and the bars show you how far along you are. New customers also get a $20 bonus for signing up!

How We Save a Lot of Money 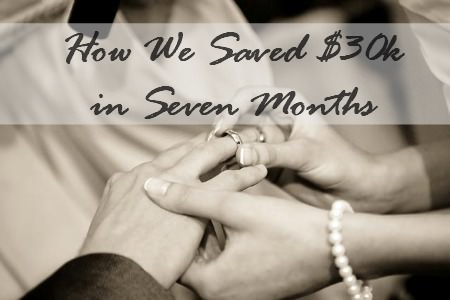 It seems that when people start making money, all people want to do is tear them down. Out of jealousy, out of spite, out of reason that perhaps it makes you feel bad about yourself that you’re not doing as well as they are.

But you know what?

Eric and I paid our dues.

We’ve been broke. For the first 45 months of marriage, we were paying $1,000 a month toward debt. After six months of marriage and drowning in our finances, we downsized from a one-bedroom apartment to a shack to save money (it seriously was a guesthouse studio in someone’s backyard).

We didn’t go on a honeymoon for 2.5 years until after we were married because we couldn’t afford it.

For the past three years, I’ve been freelancing an average of 20 hours a week to make money, plus working my full-time job, and since March 2013, I’ve been going to school full-time too.

Saving a lot of money? It didn’t happen overnight.

We’ve worked our butts off to get here.

And finally–finally–after struggling through Eric’s fire academy (no pay for four months), his back injury (no pay for six weeks), and dealing with crappy pay as an EMT, he finally landed his dream job as a firefighter for a department just 20 minutes from where we live.

I wasn’t lying when I wrote that him getting his firefighter job was the biggest moment of our lives. It’s been the main reason we’ve been able to save so much this year.

So how did we save a lot of money? The secret formula:

Well, we’ve been hell bent on becoming homeowners, and after talking to a bank, we found out that we could forgo the FHA loan (I am not a fan of FHA loans) and apply for a conventional loan with just 10% down.

And since we live in southern California, we need at least $50k to be in the running for 10% on a $500,000 starter home (yes, I said starter home, that’s just reality for the area that we want to live in).

There are only 10 paydays left in 2014, and we have a few small trips planned. And what if an actual real emergency happens?

It’s going to be tight but it wouldn’t be a goal if we weren’t pushing ourselves, right? Wish us luck!

Stitch Fix Scam: Why You Should Cancel Stitch Fix NOW

Why I’m Giving Myself an Allowance

Congrats!! That’s a huge feat and one step closer to owning a home. Yay! I look forward to reading the end of year savings total post.

This is fantastic!! Congratulations on achieving such an amazing goal.

Congrats, guys! What an accomplishment! That is truly amazing! 🙂

Congrats on this huge accomplishment! Saving that much in such a short time shows incredible discipline and focus on your part. I think your goal of saving for a down payment is worth it. Give it another year and you could have 100k saved for that house. It realistically could take you that long to find a place you like that fits your budget. Well done!

Congrats! Clearly you worked hard to accrue those savings. Don’t let anyone try to take the joy of that accomplishment away from you!

Congrats on meeting your savings goal!

Holy cow! 30k is fantastic! It’s amazing how much you can sock away when the debts are no longer claiming the cash and now that y’all are bringing more in.

Every time you talk about home buying, I die a little over the sticker shock of CA prices. Crazy, just crazy. I don’t see us buying a house any time soon because of all the moving likely in our future, but it scares the heck outta me.

Good luck! You two have earned it!

Once I get these pesky student loans paid off, aggressive savings is my next goal. I have a lot of things to save for.

yes I love them!! I actually only recently started using them and I’m wondering what took me so long!

I’ve never heard about conventional loans with only 10% down! That’s pretty awesome. Although at the rate you’re going, each month you hold off, you’ll have a ton more money to put down. Keep it up!

That is so true!!

We’re hoping by next spring to have enough saved up, but we also don’t want to wait too long that prices go above what we can afford, or mortgage rates go up (which sound like it may be happening next year?)
I guess you have to have really good credit for conventional loan with 10% so luckily we qualify.

Totally just being nosey, but i love this kind of stuff. How much do the firefighters in y’alls area start out making. We live in North Alabama and ours only start out at $36,000. Crazy how different it can be! 🙂 Congratulations by the way! That is amazing to have saved that kind of money in such a short time!! Y’all can totally hit the goal of $50K

I’ll email you with some numbers 😉

Wow, that’s quite a huge success in such a short time frame. While I’m not trying to be a negative Nelly, I do have one question. I’m a complete rookie with all things real estate, but I thought you were supposed to have 20% for a down payment? Do you go with 10% just because prices are so high in that area?

You can have as low as 5% with an FHA loan. A traditional loan requires 20%, but because we have excellent credit, we qualify for a 10% conventional loan, which is what we’re shooting for. Yes, getting 20% on a $500,000 starter house is insane and we’re not willing to wait that long bc most likely prices will explode and rates will go up by the time we get to 20%.

Ah, gotcha. As long as I stay in NYC, I’ll be a renter for quite awhile, so I never really pay attention to this stuff. Good to know though. I’ve started a fund for a future down payment, just to be ahead of the curve, but I think it’s at least five years away.

Is there pmi on the loan with 20% ? I know they will do a lower percentage with good credit, but have never heard of them waiving pmi. Just curious.

Yes, there is still PMI with a 10% down loan (vs. 20%) but it is much less than PMI charged with an FHA loan. The way it was explained to me was that FHA is really for first homebuyers who can’t qualify for a conventional loan bc they don’t have the down payment and/or they don’t have good enough credit. We have no problem with our credit, but accruing 20% down a $500,000 house (plus closing and still have money in the bank) would take us a while. As we get closer, we can evaluate better our options, but we also don’t want to wait too long and then miss out on the current mortgage rats, or have prices go way up. I know in other parts of the country, the housing market is different, but in our area, it’s very difficult.

That makes sense! I was thinking (hoping?) the rules had changed. I know the lifetime PMI on an FHA loan would be killer, at least with conventional once you get to 80% LTV I think it can still be dropped off. Completely agree about potentially being priced out in your area, and even 10% is more than impressive!

yeah, there’s still a lot to decide. There’s a small part of me that thinks we should just keep saving for as long as possible, since we do really like where we’re currently living. But the other part of me doesn’t want to be priced out, at what point does PMI outweigh higher mortgage rates and prices and vice versa?? So much to think about …for now, we save 🙂

Congrats! You are one step closer to home ownership. That is officially awesome.

Congrats on beating your time line, by A LOT! That’s a fantastic savings rate, and I wish you a lot of luck getting to $50,000. 🙂

Thank you so much!

Congratulations, and I think it’s awesome you’re continuing to up your savings goal even though you already reached your first goal!

That is seriously awesome news.. you are an inspiration

Wow!! That is pretty incredible. You really did pay your dues. You are finally getting to have fun AND save. What’s better then that?

Wow! That is such huge progress!!! Congrats! 🙂

That’s awesome! We’re also hoping to buy a house (but late next year) and are on a mission to save as much moola as we can. So far, we’re doing okay, but we really need to kick it into gear. I’ve been thinking of doing something drastic, like downsizing our apartment, but haven’t been able to get up the guts to do it. That may be next on our list! Way to go, you’re story is very inspiring! 🙂

A part of us almost wishes we had stayed in the shack bc the amount of money we would be able to save would be INSANE. BUTTTTT– we honestly probably would have killed each other by now bc that place drove me nuts.

So you know, you have to make sacrifices you can actually live with : )

I’m so glad you have been blogging this whole time so your journey has been well-documented. It really is an incredible story. Great job on meeting your goal early and setting an even more ambitious one!

I know! It is very nice to have all those posts with all our setbacks and failures so people can really see how we’ve gotten here–it’s been a long journey!

Whoa that’s amazing! And, I love that since you overachieved you’re revising your goal to make it higher – way to go! And you’re totally right, it is tough, but if it was easy, everyone would be doing it!

Thank you so much!

Dang you are machines! And that’s not including retirement savings, just cash savings?

We have the same goal, same numbers, same type of RE market. Still seems so far away…

Correct, that is just cash savings, and not retirement.

Home buying does seem so far away, but I feel like Dory–“Just keep swimming!” and eventually you’ll get there 🙂