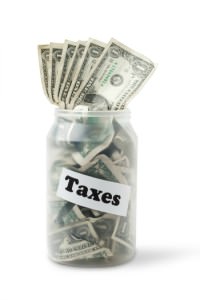 At the beginning of the year, Eric and I committed to saving $30k this year to help fund a house down payment and new car.

We almost four months of the year gone, I figured we’d take a look and see how we’re doing.

Despite getting off to a slow start in January because Eric didn’t get his first full paycheck from his new job until February, we have been working really hard to catch up.

That is just shy of $10k, or a third of our goal, and it’s only 25% into the new year, which means we’re ahead of schedule, right?

Apparently, we weren’t deducting enough money from our paychecks, and since we made more last year than in previous years, we owed more as well.

It could be easy to get defeated at a moment like this, but we actually didn’t cry too much as we wrote that check to the IRS.

We’re confident that we’ll be able to recuperate the funds quickly, thanks to a combination of a lot of overtime and a three-paycheck month in May.

Our savings are comprised of a combination of my freelance income and our take-home pay.

I try to put the majority of my freelance income into our savings accounts, but I also use the money to pay for graduate school and vacation fund, as well as charitable donations.

For the past two months, we have also been able to save 36% of our take-home income  (after taxes, after 401k contributions).

We’ve also adjusted our paychecks so that we hopefully won’t be hit with such a huge tax bill next year.

Our goal is to have $15k in the bank by the time we check in again in July, which will be halfway through the year.

How are your savings goals going?

Random Thoughts on Homework, Oscar Pistorius, the Real Housewives and…

5 Ways to Save for the Next Family Vacation

And I thought our $714 tax bill was bad! hahaha Glad you had it in saving though, as we did our little bill. You are SO going to hit your goal, very soon!

Eek! We had the same issue this year and had to write a $1600 check…nearly cleaned out our very new savings account, but we, too have adjusted our witholdings, and are more determined that ever to manage our money wisely so this type of surprise doesn’t knock us down!!!

Appears to be like you are doing excellent. Our benefits are doing very good. So far we are on focus on with preserving for our urgent finance. This season we got a tax return because we have reductions from the home so that was awesome. Thanks for sharing.

My saving goal for this month really failed! I had lots of unexpected payments and I gave my younger sister for her summer tuition fee. You’re on the right track with your saving goals!

It hurts to have to write that check but you had the money to write it! Imagine how that bill would have felt if you hadn’t paid off your debt and started saving.

You guys are making amazing progress. Well done! I enjoy following your journey.

I totally feel ya on the taxes. Between everything I owed for 2013 plus estimated for 2014 I paid nearly 8k. Double ouch! I think you’re doing great though and sound really committed to your goals!

I find it’s hard to complain too much about having a high tax bill since it means your income was a lot higher last year, too!

Good luck playing catch up on that goal for the next few months – I’m sure you’ll reach it!

You’re still doing great though! We owed a decent amount this year that we didn’t realize. It stunk but we are working on getting back on track.

Sounds like you’re doing great. Our savings are doing pretty good. So far we are on target with saving for our emergency fund. This year we got a tax refund because we have deductions from the house so that was nice.

Kind of a double whammy as I would expect that in addition to paying the taxes, you’ll probably have to re-adjust your withholdings so that this doesn’t happen again next year, which will have an effect on how much you’ll be able to save.

Either way, I think you have a positive outlook. Best of luck completing your goal.

I can attest that tax surprises like those SUCK. I had two years back to back with similar surprises; first, a 2.3k tax bill followed by a 1.2k. This year, I broke even, and I intend to keep doing that for the foreseeable future.

Regardless, GOOD JOB on saving that much! I have no doubt July comes, you will be way past the halfway point on your goal.

Ouch. That does hurt. The good news is that you had the money to pay that tax bill but it really sucks that you had to use it!! I was so afraid we would owe this year but we didn’t. We don’t really have savings goals per se and we aren’t saving for anything in particular but we set aside a set amount of money every month into our savings. Save, save save!! That’s what you have to do.