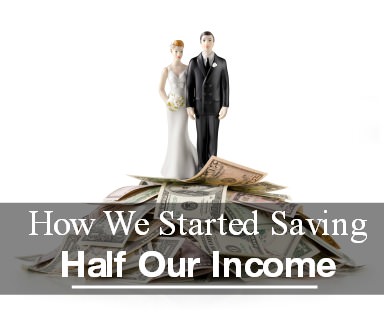 I had heard of the concept to save half your income when Eric and I were in serious debt, and I always seemed to roll my eyes.

Because let’s be honest: those people either made serious dough or were living like peasants.

So I continued to glaze over those posts that made it sound like it was even in the realm of possibility that someone could save half their income unless they were eating ramen 3 meals a day or had the funds to make it rain at da club.

Until, of course, it happened to us.

Saving Half Our Income

For the past three months, Eric and I have consistently been able to save 50% of our after-tax income.

At first, I didn’t really believe it, I just noticed that we were able to save a lot more than in the past.

But sure enough, every month—between our house down payment fund, Christmas fund, and retirement savings—we’ve been putting away half our income.

In May, we saved 56% of our household income alone, meaning not even including our retirement savings. It helped that May was a three-paycheck month, but still, it was an impressive feat.

So how did we get here?

We Paid Off Our Debt First

You can bet 100% that if we had $45,000 in debt still lying around, there’s no way we would have been able to accomplish this milestone.

In January, we finally paid off the last of our debt thanks in large part to the $20,000 I made online last year.

It was hard—SO HARD—to watch all our hard-earned money go toward debt rather than savings, but I knew that eventually we’d be rid of it, and all our money would finally really be ours.

We Made More Money

At the same time that we paid off our debt, we started making more money.

I received a raise in December, and Eric started his firefighter job in January (after 40 months of trying to become a firefighter in southern California!).

We saw our income increase about 33% within a few short months.

It was tempting to go crazy and start ordering $10,000 diamond martinis, but we said nah, that’s not our style.

Instead, we decided that the money that had previously gone toward debt would now go straight to savings.

We Paid Ourselves First

Instead of waiting til the end of the month to figure out how much money we would have left over that we could put into savings, we decided to pay ourselves first.

That means that we figured out how much money we needed to pay our bills and live comfortably (restaurants, gifts, spending money, clothing etc).

Because even though we wanted to save as much as possible for our house, we were also freakin’ tired of living by the budget (love shack, anyone?) and heck, we wanted to live it up a little.

I was able to configure my direct deposit through work so that a certain percentage would go straight into our savings account first in an online bank, and the rest would go into our checking account.

We have separate checking (Bank of America) and savings accounts (Capital One 360) because it helps us to keep that money separate so we’re not tempted into spending it.

Capital One 360 also offers us 0.75% interest rate as opposed to BofA’s paltry .05%. Every bit helps when you’re saving for a house!

We Lived off the Same Amount of Money

Despite the increase in our income, Eric and I haven’t gone overboard with lifestyle inflation.

But for the most part, we stick to a budget that we’re comfortable with and that allows us to indulge in certain things every now and then:

Or splurging for floor seats for Jay-Z and Beyonce’s On the Run tour.

Heck, we even went to Cabo with money that was budgeted for in our Travel budget, and we used credit card reward points to pay for a good chunk of it!

So instead of spending all that extra money we bring in, we put the majority of it into savings.

Any penny that comes in that is not part of our regular income goes straight into savings.

How to Save Half Your Income

So if you’re wondering what the secret is to saving half your income, this is what we did:

I was too busy before making excuses as to why we would never be able to save half our income. And now, I realize that we were on that path all along.

Do you think you could ever save half your income?

I want to buy a house

[…] The Newlyweds on a Budget shared their story on how they were able to save half of their income here: How We Started Saving Half of Our Income […]

[…] I’m happy to report that due to our extreme budgeting (some months we were even saving half our income!), we’ve been able to reach our $30,000 goal five months […]

[…] We’ve actually been doing a great job of saving money. For a few months, we were even saving more than 50% of our income! […]

[…] But then May was a three-paycheck month, which helped propel us into saving half our income. […]

[…] Something happened this year that made our lives a million times easier: we made more money. […]

[…] How We’re Saving Half Our Income — If you want to save half your income, start by paying off all your debt. [Newlyweds on a Budget] […]

Great job you guys! I think that saving that much wouldn’t be that easy, but still it’s doable.

It really is tempting to spend more as we make more. The key is curtailing the spending monster inside us.

That’s fantastic! I can’t wait to pay off our debt so we can start saving, too! Great job!

Very inspiring. I will share with the Real Money community!

Given how much money we currently put towards debt, yes, once it is gone we could save half of our income. Will we? I don’t know. I would estimate that when our debt is gone we’ll save closer to 35% in various forms (long term, vacation, emergency). I want more freedom (read: inflation) when this debt is gone.

Everyone has a different definition of what constitutes savings. I’m at 30% going straight into long term savings. That’s my benchmark. I figure anyone who has a benchmark and sticks to it over the long term can only be successful.

Good idea on paying off debts first! Congratulations, that is a great accomplishment already. 🙂 It is really better if you have planned everything to achieve a specific goal.

Super inspiring girl! Matt’s finally seeing an uptick in income, so we definitely need to save more! Medic school’s not gonna be cheap!!

Very impressive! I like seeing the progress y’all have made. It didn’t happen over night and there were some years of scrimping, but you are at a place now where it’s all been worth it. It’s a great reminder and a good example of how finances should be handled!

We are working towards beefing up our savings. Our two big moves back to back had a lot of expenses and my underemployment since we’ve landed in El Paso has been tough. I’ll be making more money in the fall though and almost all of that will go into savings. I don’t know that we will be at 50%, but I think that’s a great goal for us to shoot for!

This is a nice plan for anyone to begin saving more. IT goes to show if you work hard results will follow. Wish you luck that you continue saving the big 50%.

That’s awesome! I’m working on saving 34% of my income by September. But, I still have student loan debt I’m paying off, so 50% will have to wait until I’m earning more! 🙂

When you say paid off all your debt do you include car payments? Together we currently owe about $2,200 on one credit card. I know not much but to us it seems like a lot. We are contributing as much as we can to pay that off by September because we have a baby coming in October (yikes! what timing right?) But next year once we settle how to pay the hospital, the addition to our health insurance and babysitter costs we want to analyze saving about 20k for a house. However we owe 18k on a Honda we got for our little family to safely commute lol. Do you think paying the Honda off first is worth it before saving for the house? or I always think our car loan is like 2% interest and the majority of the payment going to principle it’s not urgent to pay it off, as say having a room for our new baby?…Suggestions? lol

Yes, I do include car payments under debt. However, I think everyone’s situation is unique. I wouldn’t be opposed to getting a car loan in the future, especially if the interest rate is low and we’re trying to save for other things. I think def try to pay off that credit card debt first. Then you should probably do whatever makes more sense for your family. Is it worth it to sacrifice for another year so you won’t have that car payment anymore? Or do you prefer having more space for your growing family? I will say that once you have a house, having extra payments anywhere is a real money suck.

That is awesome! I figured that, before getting the car, I would be saving close to 50% my income, but I never considered it savings. I’m weird in that when I set a monetary goal, it becomes a goal/debt-to-future-self and not really savings. Weird, huh? I guess it keeps me very accountable, because I treat it as a debt, and it gets paid on schedule, no exceptions.

That’s a great way to treat your savings! It SHOULD be a bill that you have to pay no matter what. I’m always pushing our savings to the limits.

Love it! This is what we’re working towards, but like you, we have to get our debt paid off first. So frustrating! Love the concert ticket splurge!

Getting all that debt paid off was the best thing ever. It seriously made us feel like we were so RICH after it was paid off, because now all that money is OURS (even if it is just going straight into savings, rather than toward shopping sprees!)

I think setting up a separate online bank account to “pay yourself first” is the best way to do it. You don’t see the money PLUS you typically get higher interest rates. win- win. Great advice. My husband and I try to live off of one salary- we didn’t do it last year- but hopefully this year we will be able to do it 🙂

for the most part, we’ve been putting one salary entirely into savings, but we’re not entirely living on one salary. Maybe next year! Always have to have new goals right?

Congratulations! That’s such an accomplishment. Personally, I have saving goals based on gross income because I find it too confusing to count retirement savings (i.e. pre-tax 401K and post-tax Roth) in an after-tax scenario.

All of our finances are in after-tax terms bc so much is taken out of our paychecks between taxes, health insurance, and other miscellaneous.

I’m pretty sure I saw one person counting mortgage repayment in that 50% savings.

(Guess we as renters can’t do that.)