We Bought Our First Home

How Our Finances Have Changed Since Buying Our First Home 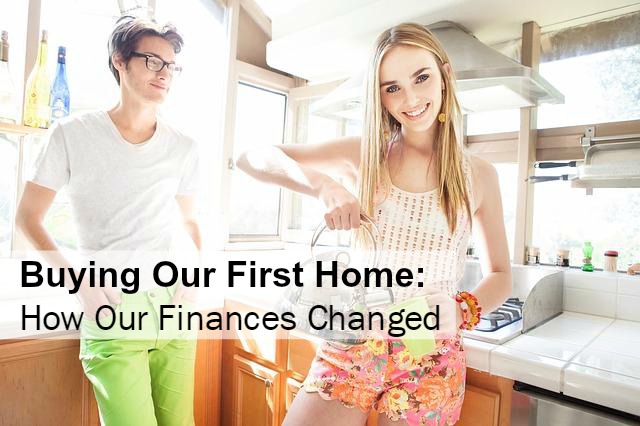 When we bought the house in November, our mortgage, property taxes, and homeowners’ insurance was 75% more than what we were paying toward the rent on our two-bedroom townhome.

It was a big change, but one we felt we could comfortably manage considering we were saving such a large portion of our take-home pay in order to fund the down payment.

In December 2014, we were pretty much broke. Between buying our first home, buying all those little things you need for a house when you move in (like curtains for windows! Hello Peeping Tom!), and the holidays, we were scraping by.

I will say it over and over again—you NEED to have a few thousand dollars in the bank as a cushion after buying your home. I know that it isn’t always the case for everyone. And Eric and I were more than willing to throw every last penny we had in order to secure our house, but I was so thankful for having those few extra thousands in the bank as I watched us drain it while setting up house.

So yeah it was a little rough at the beginning, but by March 2015, we surprisingly reached $20K in savings spread throughout several accounts. Again, I almost don’t know how we do it.

We just push ourselves to live on less. I know the amount we need to live our comfortable lifestyle, and anything above that should go into savings, right?

One trick that helps us immensely is to pay ourselves first. This means that about 65% of my take-home paycheck (Health Insurance, Flex Medical Acounts, 401K all comes out first) actually gets thrown directly into our savings account rather than touching our checking account.

And if I know Eric’s check will be bigger because he has overtime on his check? Then I throw even more of my paycheck into savings.

All my freelance income? Deposits from Paypal go straight into savings.

Being strict about staying within our “budget” has helped us in continuing to save, despite having more bills now as homeowners. I put “budget” in quotes because we just aren’t as strict as others about it. Some months we spend $500 on groceries, others $350, and some months $600. It just depends. Our budget fluctuates from month to month, but it’s always within a range we’re comfortable with and when we go over that range, we know it’s time to rein it in.

Having a sizeable savings account is really important for us because it helped us be able to say, “Yes, we can spend $1200 to replace our 1970s original windows” and “Yes, let’s spend $5900 to install air conditioning before the summer heat hits.”

It also helped when we were hit with a $9,000 tax bill in early April. Talk about ouch. We knew it was coming, and we were SO thankful that we had the funds to pay for it, but still—OUCH.

The good news? We have worked with our financial advisor to fix the problem and next year, we should break even.

While I fully expected to live as paupers for our first year of homeownership, I am overwhelmingly grateful that we’ve managed to actually still do well with our finances. We may never hit that 50% savings rate again, but becoming homeowners was a greater dream of ours.

Thinking About Going Back to School? What You Need to Succeed

Nice to read it !

My wife and I are about to buy our first home and are very excited for it. One thing that we are nervous about though is being able to fund it and find the right insurance to cover it. This helped a ton and I hope that we can find what we are looking for.

It would be very costly to own a home but once it will be established, you will experience the benefit of managing your own finances. We use to rent a house before and we realized that were wasting money so we saved some money for our house.

Paying such big expenses or mortgages requires a proper mindset. When we had our first home, everything changed because we had to make use of what was left of us to spend for the rest of the finances. This was the challenging part because we still had to save something for emergency fund.

Ugh!! $9k taxes. I thought we had it bad. We owed about 2k and we had savings to cover it but still it sucks when you feel like you already pay so much to begin with. I put my foot down and we are contributing more to savings to make up for what we may owe next year. Good on you for having that savings. We save because I make us and that is exactly why. You need a cushion. If you don’t have one life gets pretty stressful pretty fast when something comes up and you don’t have the money.

This was really good to read. I’m looking to buy (again) in the next 18 months or so (after I get my current house, which is being rented, sold), and I want to be fully financially prepared when it’s time.