Having the Money Talk Without Ruining the Romance 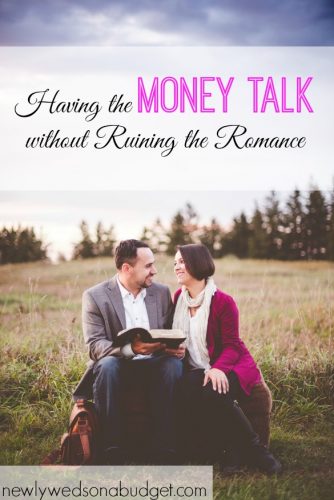 This is a guest post from Pauline of InvestmentZen.com

Money has always been a complicated topic in my relationships. While I have never been married, I have started a company and bought several properties with a partner, and lived with another one for a few years. And in both instances, there were a lot of money talks. You see, my ultimate goal was to reach financial independence at an early age, so I could leave my cubicle and finally start living life on my own terms. I was so motivated nothing seemed like a sacrifice.

Having three roommates, bringing leftovers to work for lunch, walking half an hour home after a night out instead of paying $50 for a taxi,… Some of these things irritated my partners greatly. One was broke but liked it that way, and wanted to spend whatever little he had on living the high life. The other one was born a millionaire, and had never needed frugality. His net worth had grown thanks to his own virtues, but when you have seed money and are handed a business to get started, you don’t really realize how hard it is to make your first dollar.

Anyway, I was often criticized, mocked even, but I held strong. My goal came first, and if they were unhappy, they were welcome to splurge on the side. In hindsight, I admit I was a bit of a dictator, since I also refused to get sponsored by them. I am independent like that. We would go traveling, and after three nights spent camping in the wild, the guy would beg for a hotel room, saying he would pay for it, and I would refuse unless I was able to pay for my half.

As a result, I am financially independent… and single haha. So today I would like to talk about the importance of being on the same page financially. The money talk you will eventually have to have should happen as early as possible in a relationship, to make sure you avoid unnecessary stress.

Some details, your other half will give away anyway during the first few dates. You will see if he is a teacher driving a sports car, or a banker driving a 10 year old sedan. If he takes to to the park or to the best restaurant in town. If he owns or rent, and so on. But you won’t get their history, they’ll rarely talk about their debt, their credit score or their net worth. As a side note, when they find out I am a personal finance blogger, if the discussion turns into a financial advice one, I know they are not interested in me, and just want to get free tips!

Right, so now you have been dating for a little while, and you really like that person. You want to make sure you are not headed for disaster. Time for the money talk. Money shouldn’t be taboo, and if you are close enough to be physically and emotionally intimate with a person, there is no reason not to be financially intimate as well. The one thing you should avoid at all cost though is criticizing.

“What, you’re 36 and still have student loans?”

“You make six figures and don’t even own your place?”

That will make them feel bad and not help build a stronger relationship. Now, if I find a partner is quite the spender, or having a hard time getting ahead, I ask about his goals. What does he want out of life? How does he plan on getting there? A goal should be clearly defined. If you want to have a million dollars by the time you retire, you need to save $500 for 35 years, assuming an average market return of 8%. If he just talks about retiring a millionaire, but doesn’t have a defined plan, that is where you can help. And I mean genuinely help, not become condescending or say it will never be done at that pace.

Be kind and encouraging. And make it a common goal. Life is much easier when two people decide to do their best to earn more, save, and invest their savings, so they become financially independent together. If he is still quite the spender, think about everything you are saving by being with him. Starting with paying half a rent and utilities. That alone is several hundred dollars a month. Free holidays at his parents’, free preserves from his mom, free baby-sitting from his sister?  Keep maxing out your retirement accounts with these savings. And try to get to the reason they spend. If they are bored, find another cheap hobby. Conscious spending, where you get value and satisfaction out of your purchase, is totally acceptable. Spending because you are stressed, or forgot to plan ahead so you pay three times more for convenience, can be avoided.

Communication is key in building a strong relationships. And that includes the  money talk. If you start early, and are transparent about it, money will not become taboo, and you have greater odds to reach your financial goals together.

For more tips on having the money talk check out these other great articles.

5 Ways to Save Money on Wedding Invitations

How to NOT Spend $30k on Your Wedding Day

How to Lower the Cost of Your Wedding

Pualine is such an inspiration for single ladies!

As a lady who’s passionate about personal finance myself, I do find it very important to have constant communication with my partner.

Taking control of our finances

5 Side Hustles For Couples